The 2017/18 Asian Le Mans Series opens at Zhuhai International Circuit in Zhuhai City, Guangdong Province, China on October 27/29 for the 4 Hours of Zhuhai, the first of four rounds which will see the series visit China, Japan, Thailand and Malaysia.

The series was launched in 2013 and the management and promotion of the championship being taken over by the Automobile Club De L’Ouest (ACO) in 2014.

Open to entries from the LMP2, LMP3, GT3 and GT Cup ranks, the series offers the prize of an entry to the 2018 24 Hours of Le Mans to the class winners and, as a result, has attracted interest from teams based outside of Asia as a potential doorway to the grid for the world’s premier endurance race.

16 entries have been declared on the provisional entry list for Zhuhai. There are six entries in the LMP2 class with Jackie Chan DC Racing X JOTA Sport bringing a pair of ORECA 05s, to be driven by Stéphane Richelmi, Harrison Newey and Thomas Laurent in the #7 car and David Cheng, Ho-Pin Tung and James Winslow in the #8 car. The team is also entering a Ligier JS P3 in the LMP3 class, with the driver line-up of Guy Cosmo and Patrick Byrne currently declared.

2017 has been a stellar year for the Chinese team with a 1-2 in the LMP2 class at the 2017 24 Hours of Le Mans and further FIA World Endurance Championship victories at Silverstone and the Nürburgring. The team, managed by Kent, UK-based JOTA sport currently leads the LMP2 class in the World Endurance Championship by 10 points ahead of Vaillante Rebellion.

“We’re excited to be back in Asia and competing for a fourth Asian Le Mans Series title in both the LMP2 and LMP3 categories,” said David Cheng. “There is certainly some unfinished business for the team having missed out on the title last year through an incident in the final round.” 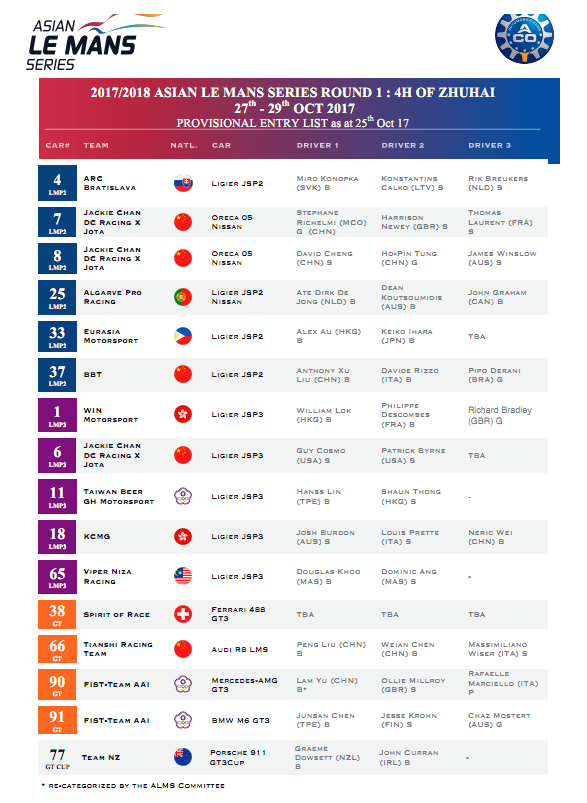 Four manufacturers will be represented by as many teams in the GT class. Spirit of Race has entered a Ferrari F488 GT3, Tianshi Racing Team has entered its Audi R8 LMS and FIST-TEAM AAI has entered a Mercedes-AMG GT3 and a BMW M6 GT3.

The sole entry in the CT Cup class is the Team NZ Porche 911 GT3 Cup car to be driven by Graeme Dowsett and John Curran.

Track action starts with the first practice session at 08:00 local time on Saturday October 28 with qualifying starting at 17:00 local time.

Tianshi Racing Team Fend Off Car Guy in GT Class Pipo Derani, at the wheel of the #8 Spirit of Race Nissan-powered Ligier JS P2, took pole for the final round of the 2018/19 Asian Le Mans Series with a 1:55.167 in the closing minutes of the session, .203 seconds ahead of Phil Hanson piloting […]

Photo: asianlemansseries.com Jackie Chan DFC Racing X JOTA enjoyed a highly successful second round of the 2017/18 Asian Le Mans Series when it took first and third in the LMP2 class and won the LMP3 class. The #8 Nissan-powered ORECA 05, piloted by Thomas Laurent, Stéphane Richelmi and Harrison Newey, crossed the line to take […]