Graham Davidson, who, alongside teammate Maxime Martin, pilots the #47 Jetstream Motorsport Aston Martin V12 Vantage in the 2018 British GT Championship, took his first victory of the season at Spa-Francorchamps.

The 33-year old Aberdeen businessman first started racing in 2015 with no former experience in karts or single-seaters. As winner of the 2017 GT Cup Championship, Graham has set himself tough targets in his quest to become a leading amateur European GT driver. In an in-depth conversation with Endurance andGT.co.uk editor Andy Lloyd ahead of qualifying for Round Eight of the British GT Championship at Brands Hatch, Graham outlined his motorsport journey to date and discussed his thoughts for the future.

This conversation took place ahead of a horrifying incident during the two-hour race when an object pierced the windscreen of the #47 Aston Martin while Maxime Martin was at the wheel. Following comprehensive checks, both at the circuit and at hospital, the Aston Martin factory driver was declared uninjured, much to the relief of the series organisers, paddock and fans.

Firstly, many congratulations on your win at Spa. Did you anticipate, at that stage of the season, standing on the top step of the podium?

“It depends. If you asked the question at different points in the season, you’d have got a different answer. I think we went in to it optimistic because people have been very complimentary of my progress. I set a realistic target for the season of one win and a couple of times on the podium. Come May, at Rockingham, we were right at the front and should have won that race by a significant margin.”

“And then Snetterton again we went in confident and we put it on the front row at a circuit that I’m not strong at and made some great passes and overtakes but during the pit-stop the radio battery went flat and we couldn’t hear the controller. When he gave the order for Max to go, he couldn’t hear it so by the time everybody realised and started pointing and waving, we’d lost maybe three or four seconds. We finished second, though, which was fantastic. In race two we marched on through until I misjudged a braking point while watching the back of Jon’s car and just caught him enough to turn him so we didn’t come away with enough points from that. By Silverstone I was putting massive pressure on myself to really get this first win and show everyone I can do it. After a cautious start I had a coming-together with Mark and I came away with a penalty and a bent steering-arm. That ruined that race for us – again. I think by that point I was so deflated I started to question my own ability.”

“So we went to Le Mans for the Aston Martin Festival with no pressure – to just relax and enjoy it. Straight away we were doing sub-four-minute laps and doing really well. It was fun to drive that circuit and it was so enjoyable. The lap times were fantastic and just being there and being part of it was amazing.”

“I led a bit of the race then, sure as anything, the Vulcan of Chris Harris and Ross Gunn in the new GT3 car came out of nowhere and I didn’t even bother trying to defend. I tried to tag on to the back of them for a nice photo finish but I clipped a bollard at Tetre Rouge and had to do a lap on three tyres. I still managed to take the class win but, coming away from Le Mans, I felt a bit down. It was such a high that, with five weeks to Spa, I’d kind of buried my head in the sand and thought it’s not going to get better than that. So what do I do now? Do I do another season of British GT or where do I set my goals because it’s so unrealistic to think that I could end up at Le Mans.”

“I didn’t expect to be on the front row at Spa and I didn’t expect to win but it was a combination of a reasonably good lap from me and a great lap from Max that got us on the front row. My head was firmly screwed on at the start but, during the lap after the restart, I was blinded by cement dust and then I was all over the place. There was dirt in my eyes and I thought, “This is ridiculous.” I had a right word with myself as I crossed the start line on the next lap and then it all started to come together and my lap times dropped. I reeled in the Nissan and Ian Loggie really quickly and, just as I got to the back of them, Jordan Witt saved me the trouble and they came together and one spun, one went wide and I went up the middle. I thought that’s two done, two to go. I really got into it and started to push.”

“The next time round Flick was pointing in the wrong direction at Les Combes. All the while I have no radio contact – our radio’s failed so we’re going by pit boards. So I think I’m still in second place and there was a red Mercedes out in front somewhere and the guys are putting out the pit boards – 30, – 31 – 27 and I’m thinking: “Yes, I’m reeling him in!” When we get to the pit stop I jumped out the car and said; “Where are we? How far off is the Merc?” And everyone started laughing as Max fired off out of the pit lane. They said: “No, you’re leading! The Mercedes had a stop-and-go and you’ve been leading the race for 30 minutes!” I’m hunting a ghost that wasn’t there!”

“And then Max just did the job. He dealt with the safety cars and kept the gap to Ryan. It felt too easy. Standing on that podium, it didn’t feel deserved. I didn’t feel that I had a fight or challenged people. It was what people had been saying all year -just keep it clean and you’ll be all right. Do what Jon Minshaw does and keep it clean and you’ll collect points. So we did that and it paid off. Now we all know we can do it. The guys can do the pit stops, the fuel, tyres and I can do the driving. Max can do the driving. As probably the lowest budget team on the grid, we can these win these races. We’ve shown that, the pressure’s off and we’re going through these sessions relaxed.”

How has the driving partnership with Maxime Martin developed?

“It’s been quite interesting for both of us. Max has operated in teams for factories for a number of years now and is used to a system that is seamless and perfect. We’re the opposite of end of the scale and our team is growing and learning. Although I knew I had the pace, I think Max had to adjust to a low-budget team and the fact that he doesn’t know me from anyone. I had to prove to him that I could do it and earn his respect and it took a couple of weekends but at Rockingham I think he started to realise that we can win these races and we can be on the podium.”

“Between Max and Prodrive engineer Luigi, they have a huge amount of knowledge and feed me enough that we can put it on the front row and I can learn from that. And from my side as well, it’s the first year I’ve had an engineer and the first year of having a team mate, having driven on my own in the GT Cup and previous club racing. There has been a huge number of changes and it’s just been adjusting and learning as we go.”

“I think we’ve been very lucky to perform the way we have but it shows you can do it on a budget and that, to me, is very satisfying.” 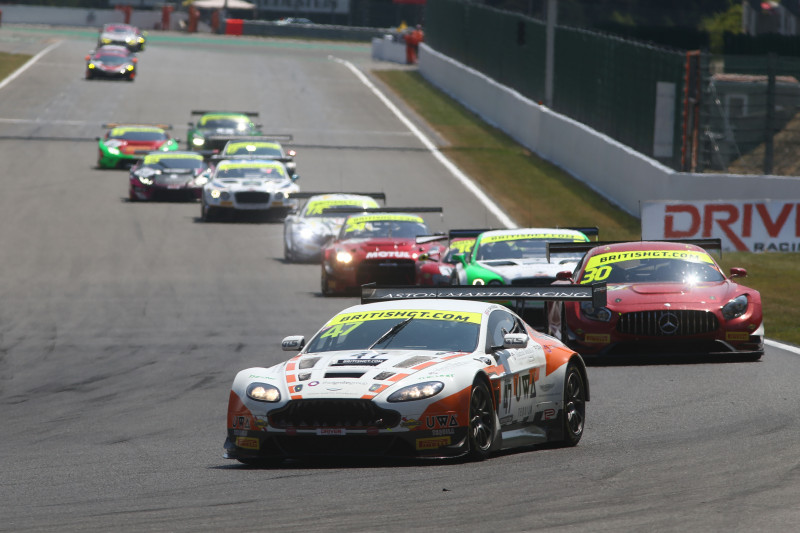 What guided you to the choice of the Aston Martin V12 Vantage?

“Two things: firstly, the budget point of view. Aston Martin supports British GT so you have the trucks at the circuit with the spares packages. You have your own parts but you don’t have to carry the big bucks stuff. We’ve also got a lot of historical data and that was a big thing. If we were to do this next year with the V12, from a budget point of view we’d be in a great place because we’ve got lots of experience, lots of parts already and the tools. The mechanics know the car. It gives you a head start. It would be great to have a new car but you need all the spares and the learning process. It would be nice to have a year when we start on the front foot.”

“The other important factor was that my brother, who loves his Aston Martins, decided to buy this V12 GT3 race car. He didn’t know what he was getting himself in to so, when he realised, he said why didn’t I use it instead of swapping to a McLaren 650? I spoke to Aston Martin Racing and put together a plan. The car was great but it needed a fair bit of work to get it back up to spec. So it was a great way for us to do a season without huge investment.”

Will you be back competing in the British GT Championship in 2019?

“It’s probably the most likely outcome. I don’t think anyone would be surprised to see us back to do that again. I wouldn’t be either but almost every year I’ve taken a step on championship-wise whether I’ve done well or not so I keep learning. Now we’re at a place where we’ve achieved a huge amount – more than most would in that time. Max is delighted and he thinks that I seriously need to think about a European championship. There’s a few people who’ve said I wouldn’t be out of place in a Blancpain car, whether Am or Pro-Am, and that’s a great place to go and the ultimate goal, I guess..”

“I’m not done yet and I want to see how far I can get before I reach my talent limit and I’d like to think it’s in Europe. It’s just finding the best path there in a financially viable and sustainable way.”

The final round of the 2018 British GT Championship takes place at Donington on September 22 – 23.

Photo: BritishGT.com Two-time British GT Champion in the GT3 class, Jonny Adam was speaking at the Media Day for the launch of the 2017 season for the premier national GT championship. Adam, partnered for the second year with Derek Johnston in the #1 TF Sport Aston Martin Vantage GT3, is not going into the new […]

Photo: BritishGT.com/Jakob Ebrey Team Parker Racing’s #7 Bentley Continental GT3, piloted by Ian Loggie and Callum Macleod, took the victory in the second race of the weekend’s double-header at Circuit de Spa-Francorchamps for rounds seven and eight of the 2017 British GT Championships. Second across the line in the GT3 class was the TEAM WRT […]