The #32 United Autosports Ligier JSP217 took the LMP2 class and overall victory at The Four Hours of the Red Bull Ring from Spielberg, Austria. The #32 car, piloted by William Owen, Hugo de Sadeleer and Filipe Albuquerque crossed the line just 4.554 seconds ahead of the #22 G-Drive Racing ORECA 07 driven by Memo Rojas, Nicolas Minassian and Léo Roussell.

Taking the final step of the class podium was the #39 Graff ORECA 07 driven by Eric Trouillet, Paul Petit and Enzo Guibbert. 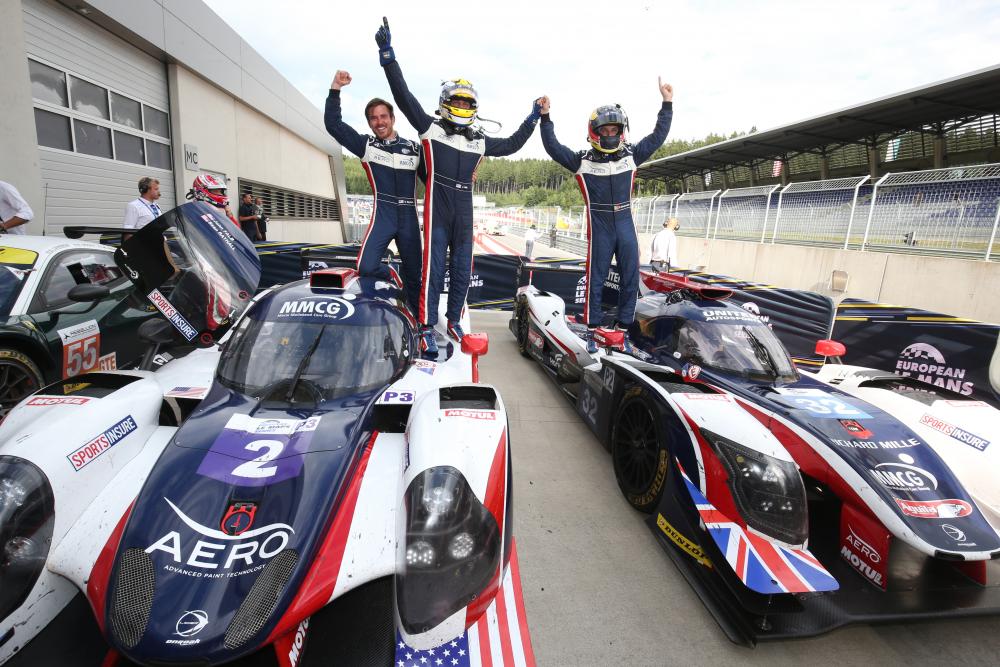 Third in the LM GTE class was the #90 TF Sport Aston Martin Vantage with the driver line-up of Salih Yoluc, Euan Hankey and Nicki Thiim.

The 4 Hours of the Red Bull Ring was a race of attrition with ten cars not being classified at the finish.

Léo Roussel led the field away from the start in the #22 G-Drive Racing entry with the #32 United Autosports Ligier taking second place ahead of the #21 DragonSpeed ORECA, piloted by Nicolas Lapierre.

The first retirement of the class was the #3 United Autosports Ligier JSP217 with Wayne Boyd at the wheel after drive-shaft failure forced the car into the garage.

After the first round of pit-stops the #32 United Autosports Ligier, now with Hugo de Sadeleer at the wheel, held the lead. The #22 G-Drive Racing entry had been delayed leaving the pits after a problem with the start motor.

As the race entered the final hour-and-a-half, it was the #22 G-Drive entry that took the lead after Nicolas Minassian passed William Owen.

There was more drama to come, however, after the #21 DragonSpeed ORECA, driven by Henrik Hedman, stopped on track, out of fuel.

As rhe race entered the final 30 minutes, rain at T1 and T3 forced the organisers to call a wet race. Heavy rain did not materialise, however.

The #22 G-Drive ORECA, now with Lëo Rousell back behind the wheel, headed the field with 10-secind margin over the #32 United Autosports entry, driven by Filipe Albuquerque. As the race drew to a close, Albuquerque continued to push hard, eventually taking the lead to win by 4.554 seconds.

Mikkel Jenson, driving the #9 AT Racing Ligier JS P3, took the lead at the start, ahead of the #7 Duqueine Engineering Norma M 30, piloted by David Droux.

At the half-way mark, the LMP3 class was led by the #11 Eurointernational Ligier JS P3, ahead of the #2 United Autosports entry., The #7 Duqueine Engineering entry briefly held the lead but went off at T4 and was retired after recovery.

Falb, driving the #2 United Autosports entry took the lead in the LMP3 class and was some 25 seconds clear of Davide Uboldi in the #11 Eurointernational entry. A penalty for abuse of track limits resulted in a ‘stop-and-go’ for the #2 car with four minutes left in the race. Falb emerged just ahead of Uboldi in the #11 car and was able to hold on to his lead, bringing the car home for the class victory.

The LMGTE class was a battle of the Ferraris as the #55 Spirit of Race entry, driven by Duncan Cameron, Matt Griffin and Aaron Scott fought for class honours with the #66 JMW Motorsport F488 GTE with the driver line-up of Robert Smith, Jody Fannin and Jonny Cocker.

Scott, in the #55 car, took the lead in class at the start and the Spirit of Race entry held the lead until, after 75 minutes of racing, Smith in the ’66 car passed Cameron.

Scott got back into the #55 car and chased hard, passing Rob Smith for the class lead with less than 90 minutes to go. The race was not over, however, after Cocker in the #66 car re-took the class lead. Cocker suffered misfortune after the #66 car was pushed wide by an LMP3 car, allowing the #55 car to pull out a comfortable lead which Griffin held to the end.

In the European Le Mans Series Trophy for LMP2 Druvers, Léo Roussell and Memo Rijas maintain their lead, although their margin has been cut to four points over Filipe Albuquerque, Hugo de Sadeleer and Will Owen.

Round Four of the 2017 European Le Mans Series, the Four Hours of Le Castellet at Circuit Paul Ricard is on August 27.

The European Le Mans Series held its annual pre-season Test at the Circuit Paul Ricard in Le Castellet on March 22 and 23. In LMP2, 13 of the 15 full season entries were present for the test, the missing cars being the #1 Greaves Motorsport Gibson 015S – Nissan and the #21 DragonSpeed ORECA 05-Nissan. […]