The EnduranceandGT team of editor Andy Lloyd and photographer Roger Jenkins arrived at Circuit de la Sarthe in the early hours of Tuesday June 11 following a trouble-free run down from Calais overnight. The torrential downpours that blighted the packing day on Monday in the UK seemed to have abated as we drove down and, by the time we arrived, the weather, though cool, was dry and calm.

Arriving in Le Mans just as dawn was breaking, we made first for the main entrance and its neon sign. It made for a nice photo opportunity and was a great way to start our Le Mans 2019 adventure.

After checking into our AirBnB and catching up on a little sleep, we headed down to the circuit for our first look at the paddock and pit lane as the grid prepared for the French endurance classic on June 15 – 16.

A slow walk through the paddock village brought us to the Toyota Gazoo Racing hospitality unit, a modest structure for a team at the cutting edge of current prototype racing. Exactly one year ago, we stood in exactly same place, looking into the unit, to see Fernando Alonso having lunch and this year the same happened. There was the two-time Formula One World Champion relaxing with his teammates before taking part in a short interview. Exiting towards the Toyota garages, Alonso was followed by a throng of his fans, but was patient with them all, signing hats, posters, models and even a racing helmet. I tried asking him questions about his future Le Mans plans but by that stage I think he had answered that question too many times and, on this occasion, chose to ignore it and focused on getting to his garage. 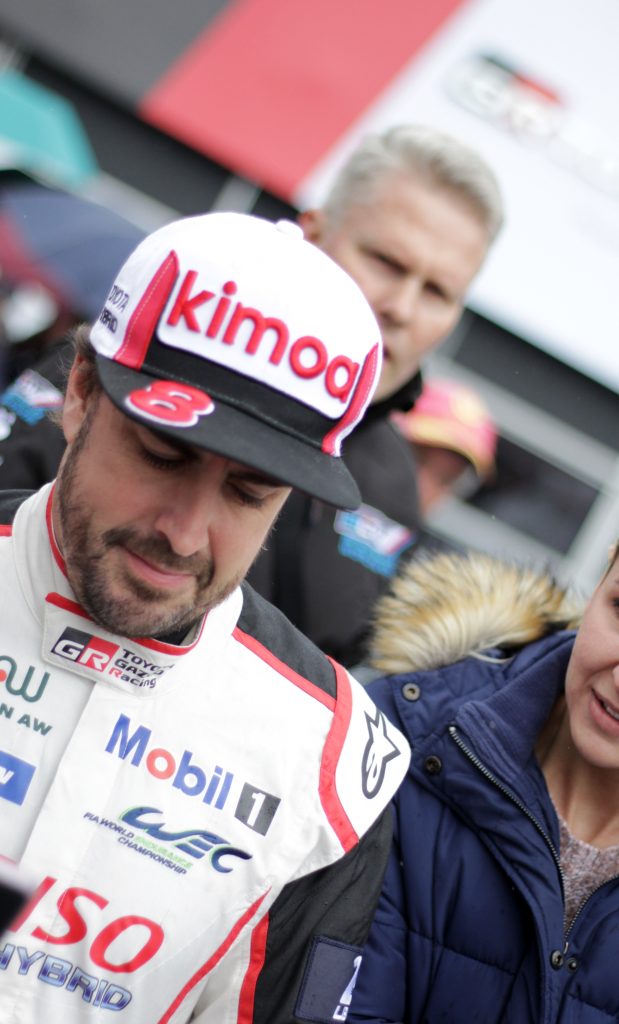 We then walked down to the far end of the pit lane to see if we could get access, as we had on previous years.

The first thing that we noticed as we approached the usual entrance were the two new garages built to help accommodate the record entry for 2019. The usual pit-lane access via Race Control and garages One and Two had been blocked by two additional, currently temporary, garages, occupied by United Autosports.

Thinking laterally, we scooted round the far side of the ACO / Race Control building to find access to the pit lane was available at pit-in.

As luck would have, as soon as we arrived, we saw that Toyota Gazoo Racing was preparing for a team photo on the circuit directly adjacent to their garages. Both cars and drivers, as well as the mechanics and technicians, were on the track and it explained why Fernando was in such a hurry to get back to the team after lunch. Incredibly we were allowed on the circuit to the join the media scrum taking pictures and EnduranceandGT photographer Roger Jenkins captured some excellent images. 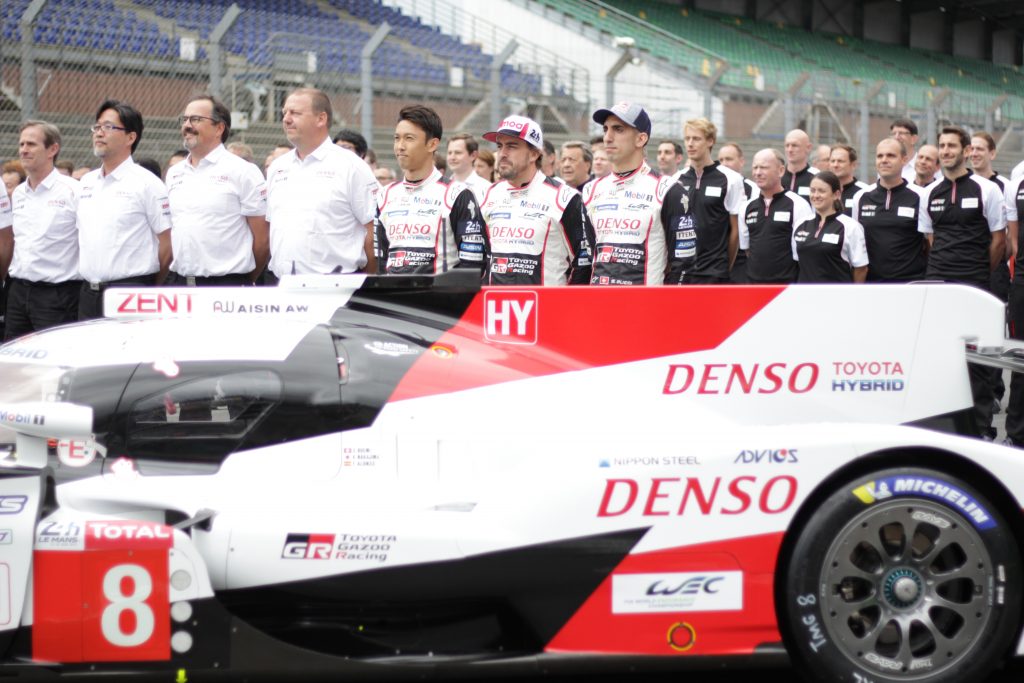 We also met Tracey and Sean Randall from Sportscar Worldwide who were waiting to get an SCWW shirt signed by all the drivers which will be auctioned shortly for charity. Sportscar Worldwide is an on-line community for sportscar racing enthusiasts that provides support and a friendly face at racing events worldwide.

Having made sure we had made the best of the Toyota opportunity, we walked down the pit-lane, stopping at each garage where activity was taking place. 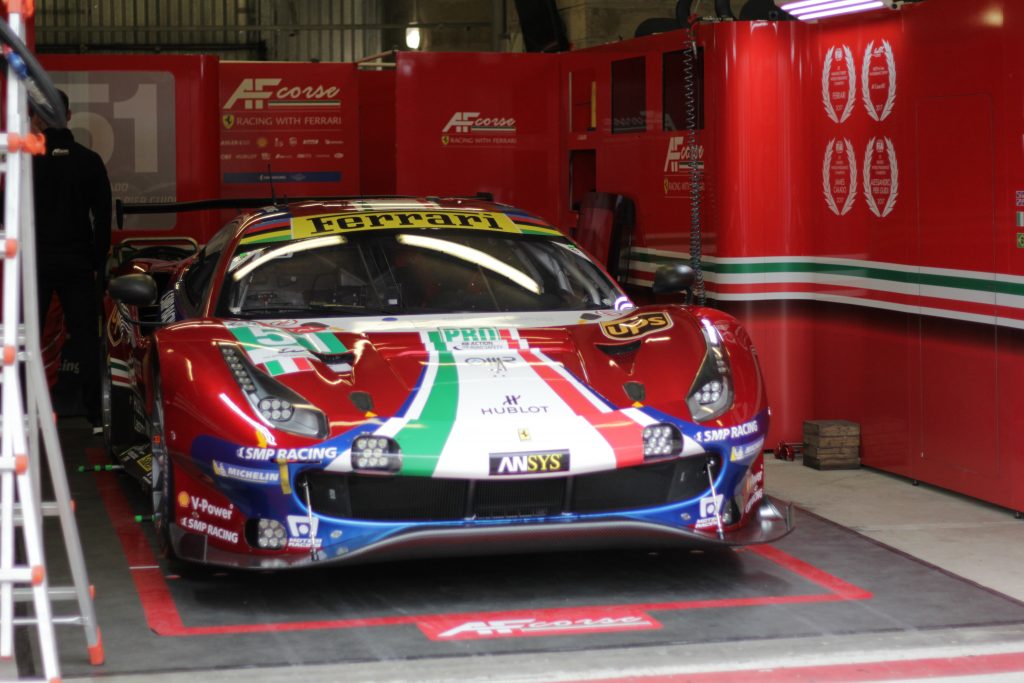 The garages for the #37 and #38 Jackie Chan DC Racing Jota Sport entries were of particular interest as this was the team we worked for in 2013 and 2014. We stopped and spoke briefly to Sam Hignett, Partner at Jota Group, who, although busy, is always generous with his time. We arranged to meet for an interview on Wednesday and then spent a few minutes looking the team’s pair of ORECA 07 LMP2s being meticulously prepared for their first track action of race week on Wednesday June 12. 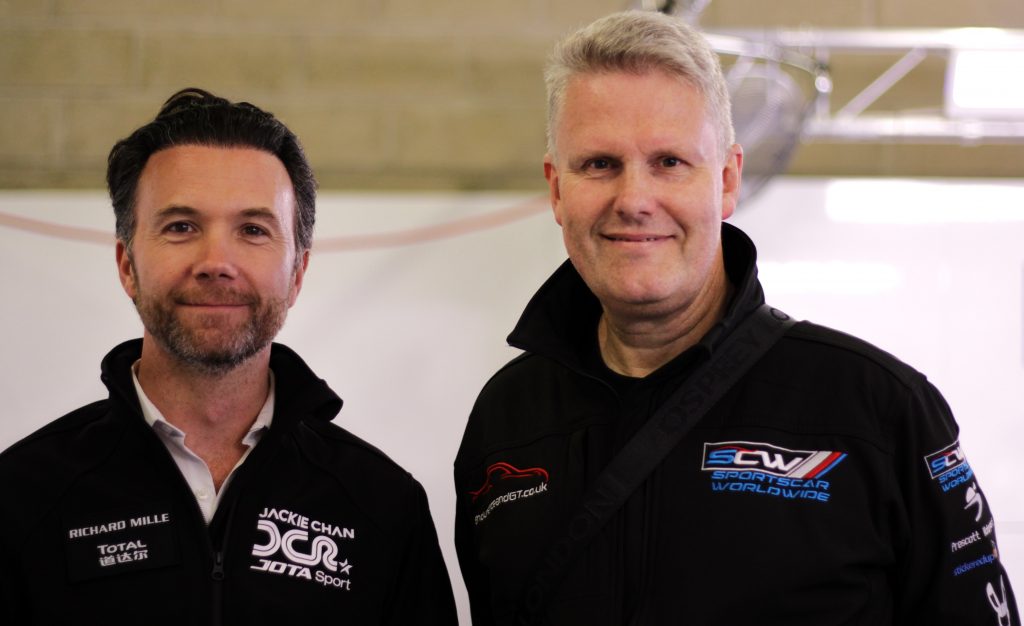 Walking to the end of the pit-lane we noticed that the pit exit was open, allowing spectators and team personnel the opportunity to walk on the circuit up to as far as the Dunlop Bridge. Also taking advantage of the opportunity were the Ford GT entries, including the #85 Keating Motorsports entry, to be driven by Ben Keating, Jeroen Bleekemolen and Felipe Fraga. The #85 car sports an almost 70’s retro livery and looked very smart being photographed with the pit lane and start-finish straight behind it.

Walking back towards the pit-lane the rain started to fall again so we took the decision to wait up at the Toyota garages in anticipation of the drivers autograph session. As we waited, the founder of Sportscar Worldwide, Ian Chicken, walked by and we chatted about the week so far and Ian’s vision for the online community moving forward. 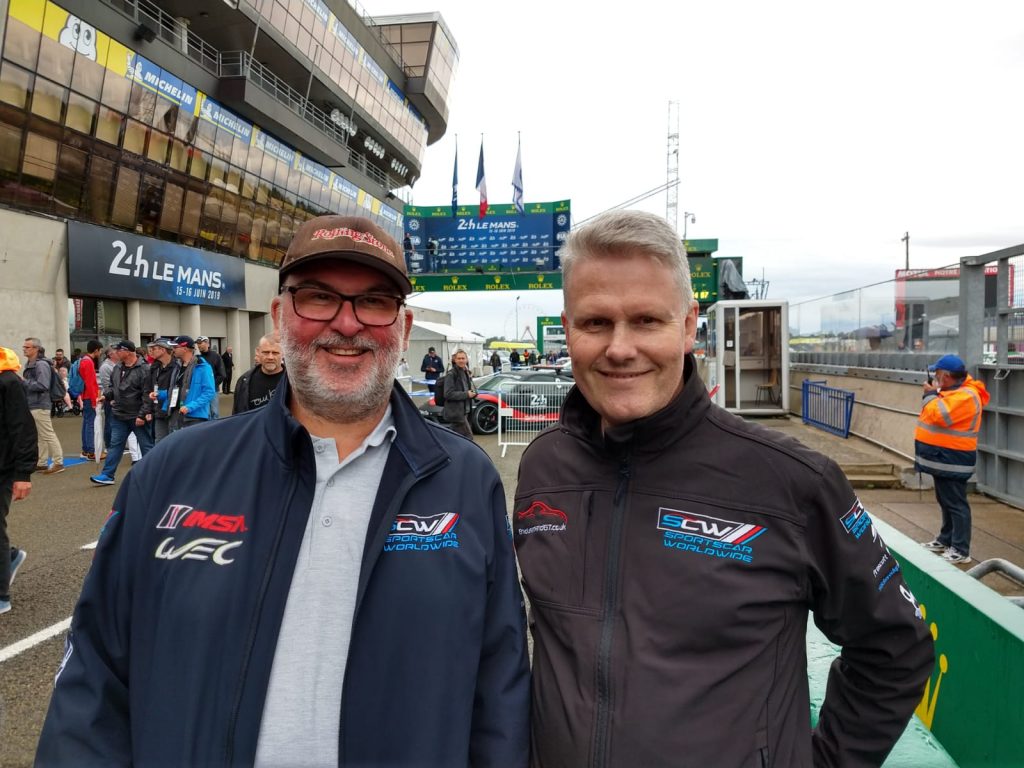 Please check back with us tomorrow for more update from the 24 Hours of Le Mans 2019.

Photo: Roger Jenkins L’Association Virage de Mulsanne, the organisation which, for the past six years, has arranged the highly popular gathering of historic vehicles and enthusiasts, has announced its theme for its 2018 event. At a presentation in Mulsanne on the evening of March 20, President of the Association David Mousty announced that Corvette will […]