Having packed the team transports; the highly reliable VW Golf and the elderly yet never-let-me-down-yet Porsche Boxster, the EnduranceandGT.co.uk team of photographer Roger Jenkins and editor Andy Lloyd set off from Kent to catch the 06:40 ferry from Dover to Calais.

The weather was the best we have ever known for an early-morning departure from Britain’s busiest ferry port and the crossing was smooth and uneventful.

Arriving on French soil, we hightailed it down to Rouen where we stopped for fuel and then continued down the alomost-empty motorway towards Le Mans. We had two choices; we could either head for our camping ground at Mont-Bizot, a modest yet beautiful little town north of Le Mans, or go directly to the town to catch Scrutineering. Knowing that fatigue would set in as soon as we had the pitched the new-for -2017 ‘supertent’ we decided to go to Scrutineering.

It was the correct choice. The town looked beautiful, bathed in warm sunshine, and the atmosphere was electric as cars, drivers and teams arrived for the traditional technical checks, interviews and official photographs.

We were fortunate to see the #1 and #2 Porsche LMP Team’s 919 Hybrids going through technical inspection as well as hear all six drivers being interviewed on the main stage. Drivers who can speak French are interviewed in that language and those that can’t have questions translated into English and then their answers are translated back into French. It’s a bit long-winded but fun, nonetheless and it gives drivers their first taste of the intense media interest surrounding the French classic. 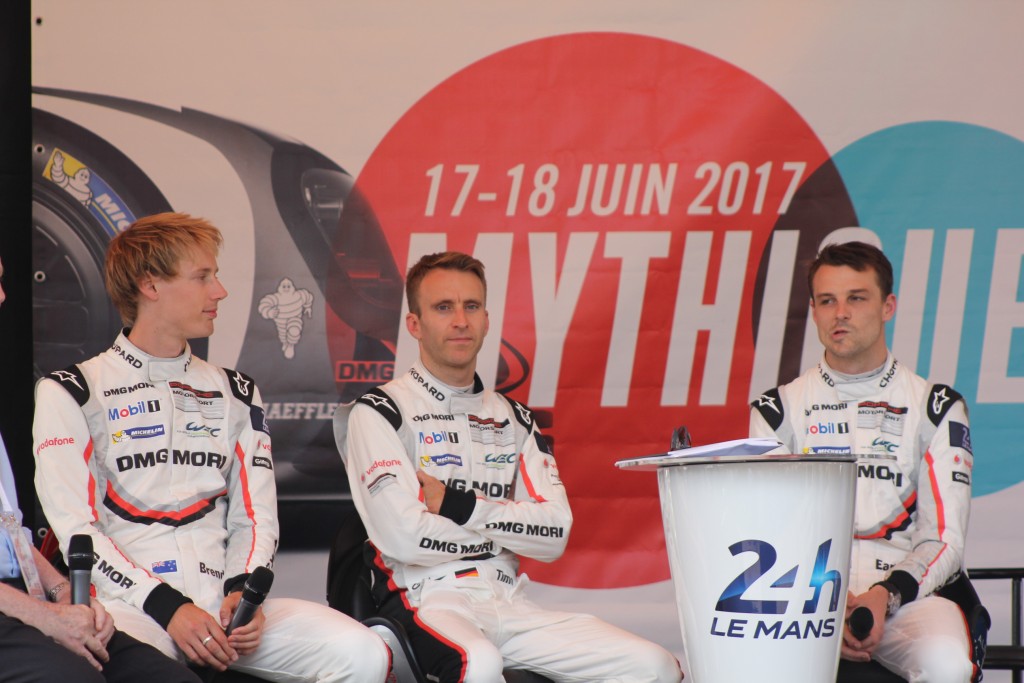 We also bumped into our friends from Jackie Chan DC Racing / Jota Sport who were due to through scrutineering later that afternoon. The team have had a solid start to the season and, with two cars entered for next weekend’s race, must be considered firm favourites for their second class title at Le Circuit de la Sarthe.

Having seen as we much as wanted to (there’s a lot more tomorrow) we drove to our base-camp for the next eight days, the Pont D’Orne campsite at Mont-Bizot.

Our new tent for this year, courtesy of photographer Roger Jenkins, is big enough to sleep ten comfortably and probably more. It was an undertaking to set everything up but, now done, it will make a superb base, whatever the weather may throw at us, for our 2017 24 Hours of Le Mans adventure.

Tomorrow, Monday June 12, sees the continuation of Scrutineering in the town centre as well the traditional ‘Winner’s Handprints’ ceremony where the previous year’s winning drivers have their hand-prints preserved in a plaque, set in the pavement in the centre of Le Mans. It should be a fun day.

After five hours of running of the 99th 24 Hours of Le Mans, Toyota Gazoo Racing leads the field with a 1 – 2, the #7 GR010 Hybrid, driven by Kamui Kobayashi in the car he shares with Mike Conway and Jose Maria Lopez, led the sister #8 car piloted by Ryo Hirakawa who completes […]