The #31 Team Parker Racing Bentley Continental piloted by Rick Parfitt Jnr and Seb Morris was declared the winner of Round 3 of the 2017 British GT Championship after a review which saw the #21 Spirit of Race Ferrari F488 GT3 demoted to second.

In a finish that had many spectators scratching their heads, the #21 Spirit of Ferrari F488 GT3, driven to the finish by Matt Griffin, crossed the line over 25 seconds ahead of Seb Morris in the Bentley after being waved through from behind the safety car. The race neutralisation had been brought about after Matt Chapman, in the #63 Autoaid/RCIB Insurance Racing Ginetta G55 GT4, spun at Turn 4 and had to be recovered. 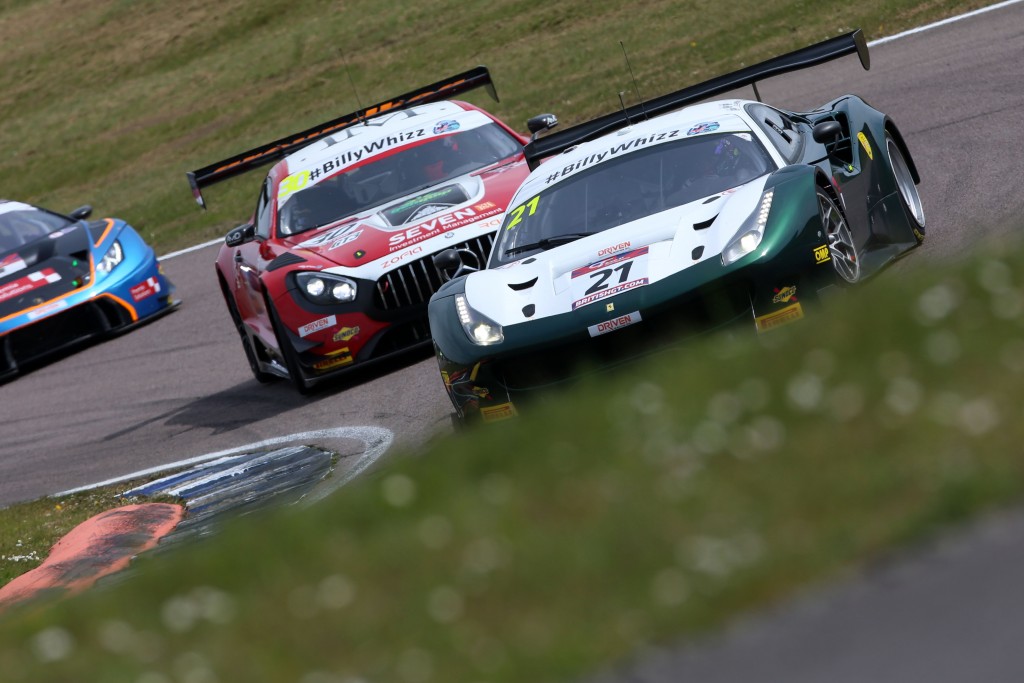 The #21 Spirit of Race found itself leading but with a 5-second penalty to serve due to track-limit violations by Duncan Cameron. As a result, it was assumed that the safety car had not picked up the race leader, which would have been Morris in the #31 Spirit of Race entry. It was also assumed that the penalty would be served retrospectively, relegating the #21 down the order.

However, confusion continued when, after the #21 entry had been waved through, it still continued to be shown at the top of the timing screens.

Many observers were assuming, incorrectly, that the #21 Ferrari was not in the running when it was announced that it was, in fact, leading the race despite being waved past the safety car.

As the race finished, the #21 Ferrari was declared the winner, with the #31 Bentley second and the #23 Macmillan AMR Aston Martin Vantage driven by James Littlejohn, taking the final stint, Jack Mitchell in third. To add further drama, however, a message appeared on the timing screens that the first and second placed cars were being investigated after contact.

The revised results were published some three hours after the race had finished, promoting the #31 car to first place and demoting the #21 to second. This was later clarified as being a result of the ‘#21’s avoidable contact with the #31 Bentley and not passing under the safety car.”

An investigation was launched into the circumstances surrounding the finish and enough evidence was found to suggest that the #21 had gained an advantage through avoidable contact with the #31 Bentley but, with the race finished, there was no way of applying an in-race penalty and thus 26 seconds was applied.

Clearly this was a highly unusual situation and one which the series organisers, SRO Motorsports Group, want to avoid in the future.

“What happened today with the Safety Car procedure was very unfortunate but, given the letter of the regulations, not something we could have controlled,” explained Championship Manager Benjamin Franassovici. “We follow the MSA’s regulations which state the Safety Car must pick up the race leader which, in the official timing, 2as not the #21 Spirit of Race Ferrari. Race Control therefore had no choice but to wave it by.”

“Applying in-race time penalties contributed to this but these are the rules by which we and others race under the MSA’s jurisdiction. Today we found an anomaly, which will be investigated fully. One way or another there must be changes to avoid this situation from ever happening again.””

Motorbase Performance Ready For British GT Round Two At Rockingham

Following a huge accident at Brands Hatch during the season opener for the 2016 British GT Championship, Motorbase Performance has worked hard to ensure that its #8 Aston Martin V12 Vantage will be on the grid for the second round at Rockingham on May 1. Phil Dryburgh, who partners Ross Wylie, in the #8 car, […]

Photo Above: BritishGT.com The past seven days have been busy for the sportscar community across Europe as the British GT Championship hosted its pre-season Media Day at Snetterton, the European Le Mans Series contenders met for the Official Test Session at Autodromo Nazionale Monza, the FIA World Endurance Championship prepared for the Prologue, also at […]