Ian Loggie and, taking the chequered flag, Callum Macleod, teammates in the #6 RAM Racing Mercedes-MG GT3, won the Silverstone 500, Round Five of the 23019 British GT Championship, in dramatic fashion, crossing the line over 36 seconds ahead of the #2 TF Sport Aston Martin V8 Vantage GT3 of Mark Farmer and, driving the final stint, Nicki Thiim. 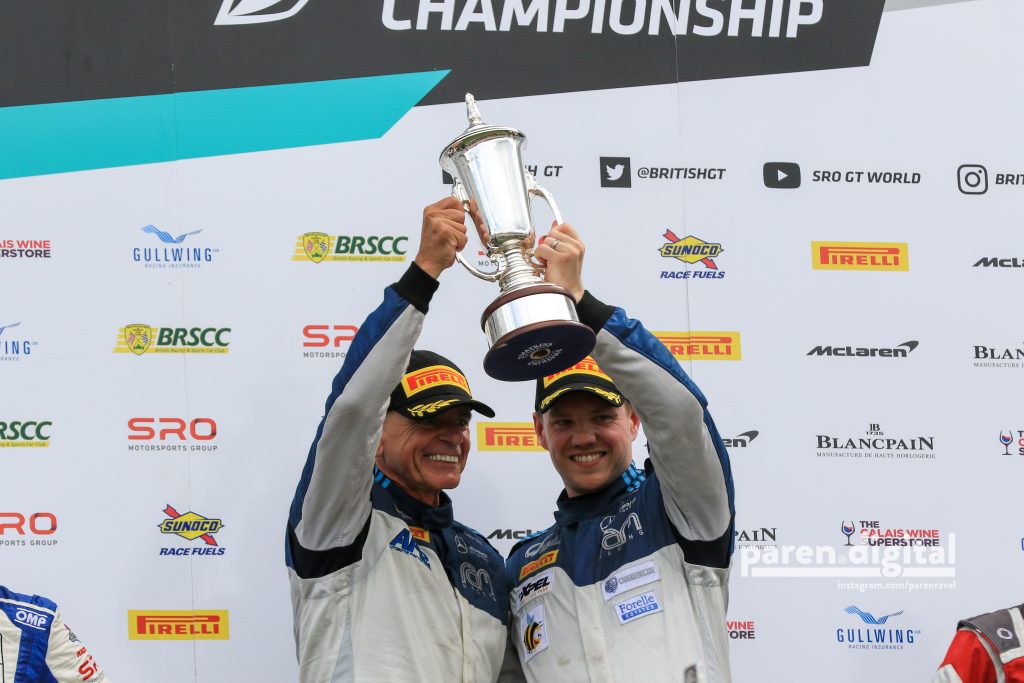 The podium positions were completed by the 2017 GT3 champions Rick Parfitt Jnr and Seb Morris in the #31 JRM Racing Bentley Continental GT3.

The GT4 class was won by Scott Malvern and Nick Jones in the #66 Team Parker Racing Mercedes-AMG GT4 with the #30 ERC Motorsport Mercedes in second place, driven by Peter Belshaw and British GT newcomer Maxi Buhk.

The race got underway after overcast but warm and dry conditions which were a far cry from the weather which afflicted most of the UK on the Saturday. Graham Davidson, behind the wheel of the pole-sitting #47 TF Sport Aston Martin V8 Vantage GT3 he shared with Jonny Adam, maintained the lead with the #6 RAM Racing Mercedes-AMG GT3 driven by Ian Loggie in second place.

There was drama in the opening minutes when the #72 Barwell Motorsport Lamborghini Huracan GT3 piloted by Adam Balon tagged the back of the sister #69 entry with Sam De Haan at the wheel. The contact caused damage to the rear of the #69 car and Balon was served a 10-second Stop-Go penalty for causing the incident. De Haan pitted and teammate Jonny Cocker took over the #69 car with a view to getting the car back onto the lead lap.

There was also drama for the #61 Academy Motorsport Aston Martin AMR Vantage GT4 driven by Ben Hurst which found itself in the gravel.

After 11 laps, Loggie in the #6 RAM Racing Mercedes decided to make an early stop for a driver change in order to get teammate Callum Macleod out in clean air.

With nearly 30 minutes run, Graham Davidson in the #47 TF Sport Aston Martin, held a lead of just under a second from Shaun Balfe in the #22 McLaren 720S GT3. Back markers held up Davidson and Balfe was able to close up as the first round of driver changes approached.

In the GT4 class, after 30 minutes of racing, TF Sport’s #95 Aston Martin AMR Vantage GT4 led the field with pole-sitting Josh Price at the wheel, ahead of the #4 Tolman Motorsport McLaren 570S GT4.

Davidson came under intense pressure from Balfe for the overall lead with the McLaren all over the back of the Aston Martin after 18 laps. Davidson remained calm and Balfe struggled to find the opening in order to pass the #47 car.

Balfe pitted the #22 McLaren after 20 laps, leaving Graham Davidson with a lead of over 10 seconds ahead of Glynn Geddie in the #7 Team Parker Racing Bentley Continental GT3.

There was disappointment for TF Sport with the announcement that the #95 pole-sitting Aston Martin AMR Vantage GT4 was to be served with a stop-go penalty for a short pit stop.

Graham Davidson finally bought the leading #47 Aston Martin in for a driver change after 26 laps and 60 minutes of racing, handing over to teammate Jonny Adam. The sister #2 Aston Martin, with Mark Farmer, continued to stay out, and inherited the lead.

Farmer eventually pitted the #2 Aston Martin after 29 laps, handing over to teammate Nicki Thiim, who was clearly relishing the prospect of fighting at the sharp end.

After the first round of driver changes had cycled through, it was the #6 RAM Racing Mercedes, with Callum Pointon at the wheel, who held the lead with the #22 Balfe Motorsport McLaren driven by Rob Bell in second. Jonny Adam in the #47 Aston Martin was in third but the car on the move was the #31 JRM Racing Bentley, Seb Morris lapping quicker than the cars in front.

However Nicki Thiim, driving the #2 TF Sport Aston Martin, was putting in some quick laps and set the fastest lap of the race with a 2:02.386. Thiim was in tenth after 33 laps so had some way to go before the #2 car troubled the leaders again.

There were problems for Century Motorsport when, on its 34th lap, the #3 BMW M6 GT3 driven by Ben Green slowed on track and head for the pit lane.

As the three-hour race entered the last 75 minutes, there were problems for the #61 Academy Motorsport Aston Martin with Micah Stanley at the wheel of the car he shared with Ben Green as it pulled off the circuit at Stowe.

As the race entered the last 70 minutes, and with all the second round of driver changes completed, it was the #22 Balfe Motorsport McLaren, now with Shaun Balfe at the wheel, who held the lead with the #6 RAM Racing Mercedes driven by Ian Loggie just 1.284 seconds behind. The pole-sitting #47 Aston Martin, which held the lead for the first hour, was in third place, Graham Davidson a little over 12 seconds behind the RAM Racing pilot.

The GT4 class lead was held by the #4 Tolman Motorsport McLaren driven by Josh Smith, followed by Seb Priaulx in the #15 Multimatic Motorsport Ford Mustang GT4 and the #75 Optimum Motorsport Aston Martin in third.

Contact between the #77 GT4 Fox Motorsport Mercedes driven by Mark Murfitt and the #96 GT3 Optimum Motorsport Aston Martin with Ollie Wilkinson on board resulted in a spin for the #96 car and an investigation by the stewards into the incident with the Fox Motorsport team manager being summoned to Race Control.

However, if we thought that the on-track action had been frenetic up to that point, nothing prepared the watching enthusiasts with the events unfolded in the closing stages.

The race came down to the final 45 minutes with TF Sport pitting first for the third round of driver changes, putting Jonny Adam in the #47 car for the final stint.

There were concerns for Balfe Motorsport when, as the team was going through the final driver change from Shaun Balfe to Rob Bell in the #22 McLaren, the drivers door failed to close, resulting in the stop taking longer than it should and a potential penalty for re-fueling with the door open. The team was subsequently served with a stop-go penalty for the pit-stop infringement.

As the race entered the final 22 minutes, and with all the third round of driver changes completed, Jonny Adam on board the #47 TF Sport Aston Martin took the lead with the #6 RAM Racing Mercedes in second place being driven by Callum Macleod. The #31 JRM Racing Bentley, piloted by Rick Parfitt Jnr and, at the wheel, Seb Morris held on to the final podium position.

In the GT4 class the overall lead was held by the #19 Multimatic Motorsport Ford Mustang GT4 being driven for the final stint by guest driver Harrison Newey. Optimum Motorsport’s #75 Aston Martin GT4 driven by Mike Robinson was second.

With the minutes counting down, Macleod gradually started to reduce the gap to the leading #47 Aston Martin driven by Jonny Adam and by Lap 77 the gap was down to just over half a second.

It was set to be a tense final ten minutes for the Redhill-based team with Jonny Adam being hunted down by Callum Macleod and Nicki Thiim getting Seb Morris in the #31 JRM Racing Bentley into his sights.

However the three-hour race still had one more card to play when Jonny Adam, with just over three minutes remaining, came up to pass Chad McCumbee in the #19 Ford Mustang GT4. Adam went to pass the Mustang on the right and Macleod on the left but there was contact between McCumbee and Adam, resulting in a suspension breakage and a retirement for the triple British GT champion and 2017 24 Hours of Le Mans winner. The retirement was heartbreaking for Graham Davidson and Jonny Adam after putting the car on pole and running a strategically commanding race.

At the chequered flag, Callum Macleod took the overall win in the #6 RAM Racing Mercedes-AMG Gt3 he shared with Ian Loggie with Nicki Thiim holding on for second place in the #2 TF Sport Aston Martin after coming under pressure from Seb Morris in the #31 JRM Racing Bentley Continental GT3.

The British GT Championship grid next assembles for Round Six at Donington on June 22 – 23.

Photo: BritishGT.com Fenny Compton-based Century Motorsport has announced that it will enter a pair of BMW M4 GT4s for the forthcoming British GT Championship. The team has also announced its first driver pairing of Ben Tuck and Ben Green with the expectation that the line-up for the sister car will be announced shortly. The switch […]

Photo: BritishGT.com / Jakob Ebrey Photography The 2018 British GT Championship enters its final round at Donington Park on September 22 – 23 and with the retirements announced of 2016 GT3 champion Derek Johnston and reigning GT3 champion Rick Parfitt Jnr, there will be plenty to make the weekend memorable and emotional. In the GT3 […]