Jonny Adam, at the wheel of the car he shared with Graham Davidson, took the chequered flag to win Round Six of the British GT Championship in the #47 TF Sport Aston Martin V8 Vantage, the first victory for the Redhill-based team in the 2019 championship. Finishing 3.417 seconds behind in second place was the #22 Balfe Motorsport McLaren 720S GT3 piloted by Rob Bell in the care he shared with Shaun Balfe.

Completing the podium in the GT4 category was the #5 Tolman Motorsport McLaren driven by Jordan Collard and Lewis Proctor.

Graham Davidson, piloting the #47 TF Sport Aston Martin V8 Vantage GT3, led the field away from pole position and started to pull out a gap from the #18 WPI Motorsport Lamborghini Huracán GT3 driven by Michael Igoe. Shaun Balfe, however, was pushing hard in third place and after two laps was less than half a second behind the #18 car.

Mark Farmer, driving the #2 TF Sport Aston Martin, had an incident on the opening laps which saw the car he shared with Nicki Thiim down in 19th position and amongst the GT4 traffic

Ian Loggie in the #6 RAM Racing Mercedes-AMG GT3 and JM Littman, driving the #9 Century Motorsport BMW M6 GT3, made contact causing the #9 BMW M6 GT3 to spin. Also spinning during the early laps was Richard Neary in the #8 Team ABBA Racing Mercedes-AMG. The team manager of the #6 car was called to race control and the car given a stop-go penalty.

After nearly 15 minutes of racing, Davidson in the #47 Aston Martin had increased his lead to over 2.5 seconds

Championship leader Adam Balon had a moment at the Melbourne Hairpin in the #72 Barwell Motorsport Lamborghini after contact with Alex Toth-Jones in the #62 Academy Motorsport Aston Martin. The resulting spin dropped the #72 car down to eleventh place overall and caused damage to the front of the #62 car. The incident was investigated by the stewards.

After 16 laps, Graham Davidson was continuing to pull out a lead and was now nearly six seconds head of Michael Igoe after 25 minutes of racing. Shaun Balfe in the #22 Balfe Motorsport McLaren was pushing Igoe hard for second and eventually took the position.

Clear of Michael Igoe, Shaun Balfe set about chasing down the leading #47 car and took over a second out of Davidson after a lap, with Balfe circulating over 1.5 seconds quicker than the leading Aston Martin.

As the driver change window approached, the gap at the front continued to reduce and, after 35 laps, Davidson held a lead of just over four seconds over Balfe in the McLaren.

As the halfway point approached the fiercest on-track battle was for fourth place between San De Haan in the #69 Barwell Motorsport Lamborgini and Michael Igoe in the #18 Lamborghini. De Haan was pushing as hard as he could and finally took the position at Redgate.

There was drama at the driver changes when the #96 Optimum Motorsport Aston Martin caught fire in the pit lane on exit with Bradley Ellis at the wheel. Ellis pulled the car over at pit-out where it was attended to by the emergency staff.

After the driver changes had cycled through, Jonny Adam, now driving the #47 Aston Martin, held a one second lead over Rob Bell in the #22 McLaren.

With 53 laps run, and with less than 25 minutes of racing remaining, Adam maintained his gap of over one second at the head of the overall field with Rob Bell in the #22 McLaren in second. Jonny Cocker, at the wheel of the #69 Barwell Motorsport Lamborghini, was third; some 25 seconds back from the #22 McLaren.

As the race approached the final 15 minutes, Adam held the lead with teammate Nicki Thiim driving the #2 Aston Martin, and one lap behind, sitting between the leader and the second placed #22 Balfe Motorsport McLaren driven by Rob Bell. The team manager of the #2 car, Tom Ferrier, was summoned to race control, presumably to discuss the tactic.

With six minutes remaining, Thiim passed Adam and Bell, in the #22 McLaren, was able to pull up directly behind the race leader. Traffic, however, fell the way of the #47 car and Adam was able to extend the lead again to nearly four seconds with less than 90 seconds remaining.

Adam was both relieved and excited to have won.

“It’s lovely to get the first win for the new Vantage GT3 in the UK,” said Adam. “The car was really good throughout the race. It was hard – the McLaren was very fast and Rob (Bell) drove a fair race but was very strong in certain areas of the lap. We struggled a bit towards the end. It’s such a heavy circuit for brakes is Donington – massive stops towards the end of the lap – and we were trying to control that towards the end through temperature.

“Graham’s stint was really good and he controlled it from the front. I think he drove one of the best stints I’ve seen him drive. It’s nice to get some points on the board so let’s get our head down and see what we can do in this championship.” 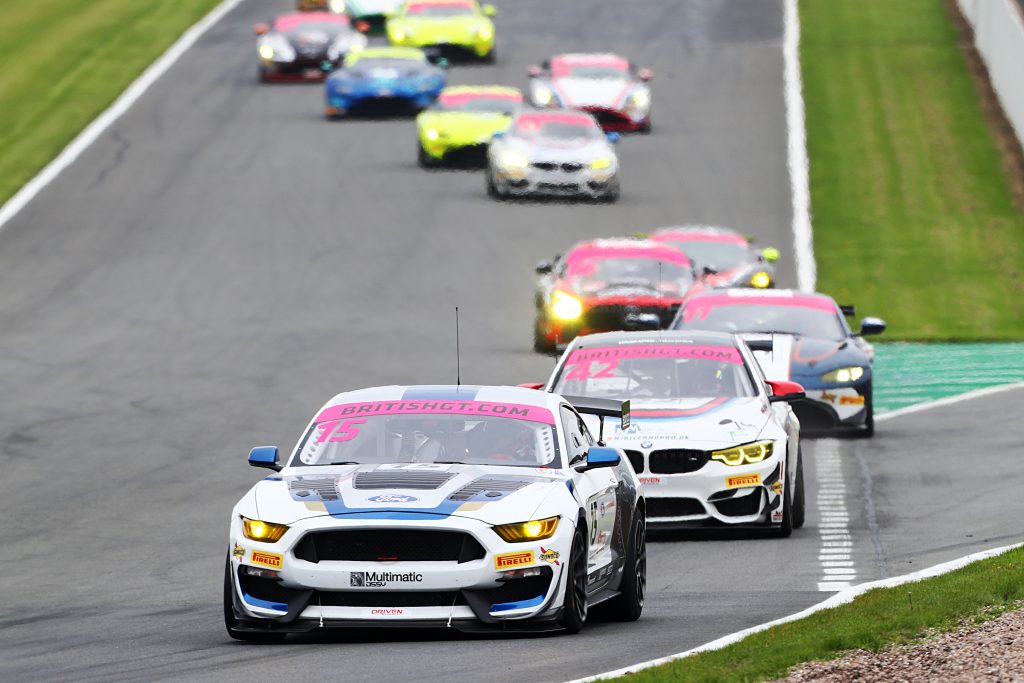 After 19 laps and over 30 minutes of racing, Maxwell was just over half a second behind Josh Smith in the McLaren 570S GT4.

After nearly 46 minutes of racing, Andrew Gordon-Colebrooke had an excursion into the gravel in the #43 Century Motorsport BMW M4 GT4.

There was disaster for the class-leading #4 Tolman Motorsport McLaren 570S GT4 after an incident involving the #69 Barwell Motorsport Lamborghini with Sam De Haan at the wheel just prior to the driver changes resulted in Josh Smith bringing the #4 car into the pits and straight into the garage for retirement.

With driver changes completed, and with less than 25 minutes of racing remaining, it was the #42 Century Motorsport BMW M4 GT4 that held the class lead. Driven by Mark Kimber in his first season of racing GT4 machinery, the #42 car had a 1.649 second lead over Seb Priaulx in the #15 Ford Mustang GT4.

Priaulx fought hard to get on the tail end of the BMW and, after 55 laps, the young Multimatic Motorsports Europe driver was less than a third of a second behind Kimber. Priaulx eventually passed Kimber for the class lead on lap 59.

Kimber, however, came off at McLeans with less than three minutes remaining – a sad end to what promised to be a superb result.

The British GT Championship grid next convenes at Circuit de Spa-Francorchamps on July 20 – 21.

The British GT Championship has announced live coverage of the UK rounds of the 2017 season by Front Runner, the UK’s only free-to-air sports channel. Coverage will start from the opening rounds at Oulton Park on April 17. Live coverage will also be offered from Rockingham and Snetterton before the championship’s blue riband event, the […]

Academy Motorsport has confirmed that it will contest the 2017 British GT Championship with its Aston Martin Vantage GT4 driven by Matt Nicoll-Jones and Will Moore. The team has also entered the GT4 European Series Northern Cup. Will Moore first raced with Academy Motorsport in 2014 when he competed in the Michelin Ginetta GT4 Supercup […]

The British GT Championship has published its full-season entry list for 2019 at its pre-season Media Day at Donington Park, revealing a record 38-car grid across the GT3 and GT4 classes. 15 cars will context the GT3 class with the Aston-Martin brand being the manufacturer with the largest presence. Four new Aston Martin Vantage GT3s […]