In a packed edition this week we have news from around the world of SRO Motorsports series including the Blancpain GT Series, the Blancpain GT World Challenge Asia and the British GT Championship.

Cheshire-based Track Focused has announced that it will campaign the KTM X-BOW GT4 in the 2019 British GT Championship, piloted by the Pro-Am pairing of Mike McCollum and Team Manager Sean Cooper.

Sean Cooper, who, with Mike McCollum, drive the X-BOW GT4 to third place in the 2018 Dunlop Britcar Endurance Championship, is looking forward to the new challenge.

“Track Focused has always run an eclectic mix of cars in a wide variety of championships but British GT is definitely a step up for is,” said Cooper. “We’ve enjoyed success in other series but myself and especially Mike are now keen to test ourselves against the country’s best GT4 teams and drivers. We know the competition will be tough and that’s exactly why we’re doing it.”

28-year-old Aberdeen-based Geddie contested selected rounds of the 2018 British Touring Car Championship in the AmD with AutoAid/RCIB Insurance Racing MG 6 with his last outing in a GT3-spec machine in 2016 when he drove the ABG Motorsport McLaren MP4-12C GT3 in the Britcar Endurance Championship. Geddie has previous experience in the British GT Championship having taken the title in 2011 driving the #10 CRS Racing Ferrari 430 Scuderia GT3 with father Jim Geddie.

Geddie’s first outing in the Team Parker Racing Bentley will be at the season curtain-raiser Media Day at Donington Park on March 5.

“It’s good to be back with Team Parker Racing as it’s where we started together in the Carrera Cup,” said Geddie. “I’ve not raced a GT3 car full-time since 2012 so to come back with Stuart is good because I know the team well and it will help me re-acclimatise. The Bentley has been a good car over the past few years and hopefully the new car will deliver for us.”

Pre-season testing has taken place for many teams on the British GT Championship grid over the past week. TF Sport tested at Snetterton with both the GT3 and GT4 variants of the new Aston Martin Vantage.

Graham Davidson and Jonny Adam both had seat-time in the Vantage GT3 with Davidson commenting on social media after Wednesday’s session that it had been “great fun getting familiar with the new car.” The Aberdonian driver, who finished seventh in the GT3 drivers’ standings in 2018, a season which included a win at Spa-Francorchamps, has also confirmed on social media that the team will miss the season-opening Media Day on March 5 at Donington to concentrate on further testing at Oulton Park.

Padua-based Daiko Lazarus Racing has named two of its drivers for the Blancpain GT Series Endurance Cup campaign this season.

Fabrizio Crestani, who has driven for the team since 2011, returns for the new season to join Nicolas ‘Nici’ Pohler in a Silver Cup line-up. A third driver will be announced ahead of the season-opening round which takes place at Monza on April 12 – 14.

Team Principal Tancredi Pagiaro is delighted at how the team’s driver line-up is shaping up.

“We are very happy having Nici back with us at Team Lazarus and having such a young driver with such a knowledge of GT racing is very satisfying for us,” said Pagiaro. “With Pohler and Crestani we have two extremely fast drivers and we know that we can fight for the top positions in the Silver class.”

Looking forward to the Total 24 Hours of Spa, the blue riband event of the Blancpain GT calendar, Bentley has announced the (almost) full driver line-up for its four-car assault on the Circuit de Spa-Francorchamps.

The driver line-up for the #107 Bentley Continental GT3 will be Steven Kane, Jules Gounon, and Jordan Pepper while the sister #108, both cars contesting the full Blancpain GT Series Endurance Cup and Intercontinental GT Challenge Powered by Pirelli, will be piloted by Andy Soucek amd Maxime Soulet with a third driver to be announced in due course.

The two additional entries will draw from the customer racing pool and wider SRO Motorsports championships. The #109 will be driven by 2017 British GT Championship drivers champion Seb Morris who will be joined by Callum Macleod and Rodrigo Baptista.

The Total 24 Hours of Spa is the finale to a festival of GT racing which opens on Monday July 22 with the lights going out for the twice-round-the-clock classic on Saturday July 27.

B-Quik Racing, based in Bangkok, Thailand, has announced that it will contest the opening two rounds of the 2019 Blancpain GT World Challenge Asia in its soon-to-be-delivered Audi R8 LMS GT3 Evo.

The Am Cup driver line-up will be B-Quik Ltd CEO Henk Kiks and Hong Kong-based business consultant Daniel Bilski. The pair have enjoyed previous racing success as GTC class winners of the 2016 MOTUL 12 Hours of Sepang.

“For sure it’s going to be the biggest test for our team to date,” said Henk Kiks. “But we’re always ready and itching for the toughest challenges! We’re really looking forward to these two events and excited to unlock the potential of the new Audi R8 LMS GT3 Evo.”

Arrows Racing is returning to the 2019 Blancpain GT World Challenge Asia with its Honda NSX GT3. Philip Ma and Alex Liu will form an Am Cup driving partnership. Liu has recently appeared in Porsche Carrera Cup Asia with the Malaysian squad.

“Alex and I are really fired up for the coming season,” said Philip Ma, who contested Blancpain GT World Challenge Asia rounds at Sepang and Fuji in 2018. “We’re a strong Am Cup pairing that should work well together. Alex’s background is mainly in touring cars but his Porsche experience will definitely help.”

The 2018/19 Asian Le Mans Series reaches its season finale with the 4 Hours of Sepang. 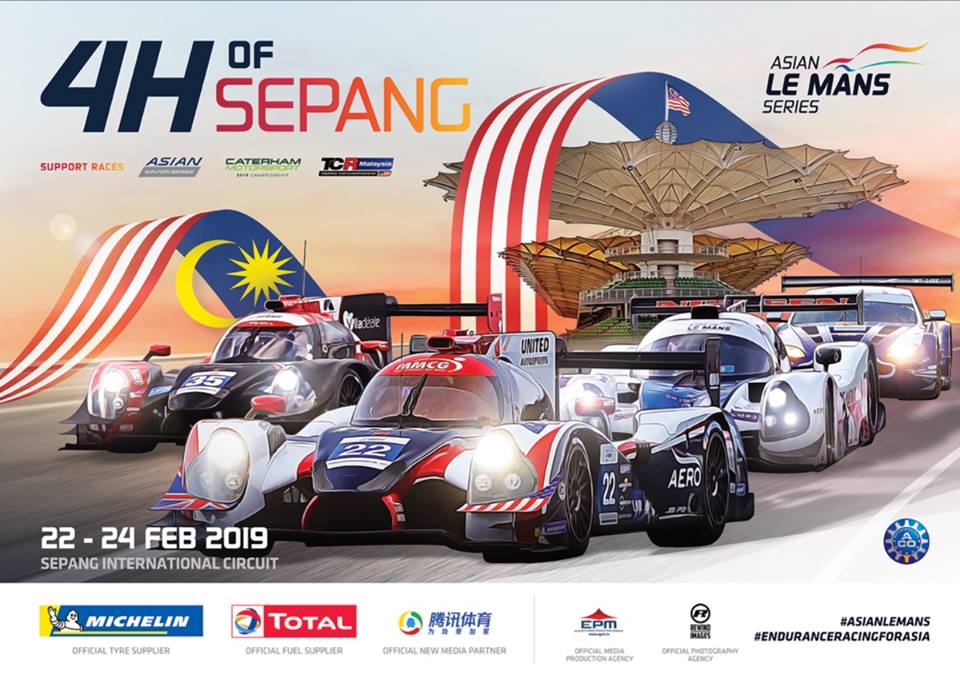 Three teams are in the hunt for the LMP2 title with the #22 United Autosports Ligier JS P2 duo of Phil Hanson and Paul Di Resta heading the tables with an 18-point lead over the #24 Algarve Pro Racing driver pairing of Andrea Pizzitola and Harrison Newey, joined, as they were at Buriram, by Ate Dirk De Jong.

Inter Europol with its #13 Ligier JS P3 driven by Jakub Smeichowski and Martin Hippe will be looking to close out the LMp3 title but with the #2 and #3 United Autosports entries close behind, it will be a highly competitive race.

Car Guy and its #11 Ferrari F488 GT3 driven by Takeshi Kimura, Kei Cozzolini and James Calado will be looking to make it four-in-a-row but a non-finish and a win by the second-placed #51 Spirit of Race Ferrari would see Alessandro Pier Guidi, Oswaldo Negri Jr. and Francesco Piovanetti take the title. Spirit of Race will certainly be leaving nothing on the table this weekend.

You can read the EnduranceandGT race preview here.

With pre-season testing and Media Days fast approaching the 2019 season is just around the corner. Wherever you are and whatever your plans are, the EnduranceandGT team hope you have a great weekend!