Hindhead-based Anna Walewska took the GT racing world by storm when she announced the launch of her new team, ProTechnika Motorsport, less than two weeks before Round Seven of the 2018 British GT Championship at Circuit de Spa-Francorchamps. Campaigning the team’s #89 Mercedes-AMG GT4, Walewska, and team-mate Tom Canning, enjoyed a dream start to the venture by finishing second in the GT4 Pro-Am category.

In her first in-depth interview since launching the team, Anna Walewska spoke to EGT editor Andy Lloyd about the formation of ProTechnika Motorsport and her ambitions for the future.

Was the launch of ProTechnika Motorsport always part of your career development game plan for this year?

“Not for this year, no, but it was something that I wanted to do at some point in my career because I know that, eventually, I will step out from the driving seat. I guess it was a natural career progression for me to go into team ownership in one form or another. It wasn’t meant to happen quite so soon but the events that led to it suggested that this was the right time.”

“Obviously I raced for the first three rounds of the British GT Championship but I would rather have stopped completely and take a year out than continued (in that way) but, me being typical me, I didn’t want to do that. After the British GT round at Snetterton, I spoke to the University of Bolton and all my sponsors about making the move into team ownership and management. I wouldn’t have made this move without their backing. It has been quite an ordeal to get it off the ground in six weeks from the point of making the initial phone calls but the support has been unreal. The British GT Championship has been fantastic and behind me all the way and all those that I’ve rung and said: “Do you want to be a part of this?” I didn’t get one person who said no. And yes – here we are!”

I know you’re proud of your association with the University of Bolton and The National Centre for Motorsport Engineering and rightly so. What does team ownership mean to that relationship and your work with the students?

“That effectively doesn’t change. I’m still the ambassador for them as a driver but I guess my involvement cranks up a gear because the team, although it is owned by myself, there is, or will be, significant investment from the University. The forward plan would be to have ProTechnika Motorsport based at the University of Bolton in their £18m motorsport building, the National Centre for Motorsport Engineering and run from campus. That is what they need to get the students involvement right from the beginning and I can provide that for them.” 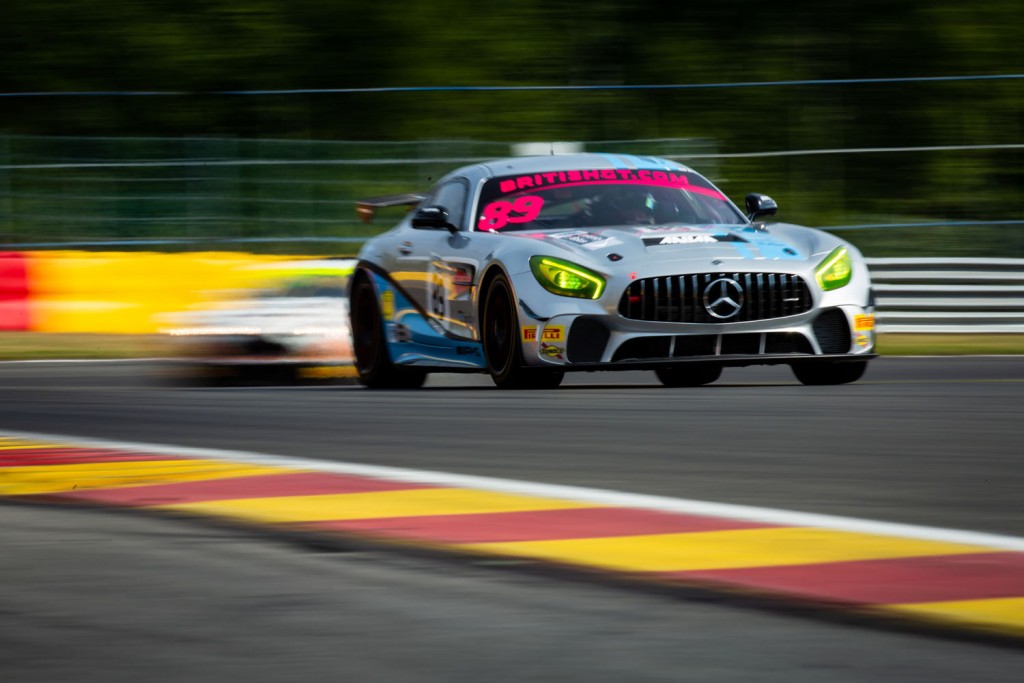 You’ve been loyal to Ginetta for a long time now. What guided you down the route of the Mercedes-AMG GT4.

“I thought about it very carefully and I felt the time was right. I’ve had some fantastic results with Ginetta with the Dubai 24 hours win and finishing third in the 2016 British GT Championship GT4 Pro-Am standings with Century so I felt it was time for a change. New manufacturers such BMW, Mercedes and Audi are joining the GT4 grid and it was Mercedes that offered me both the support and the vision to support my long-term goal of driving at Le Mans.”

“The focus with me is on British GT and GT4 but equally the GT3 car is competitive and then you’ve got the international races, the 24 Hour Series, which I want to do. I think the longevity that Mercedes are hinting at is what really sealed the deal for me. Before Mercedes launched the GT4 car, they did a lot of development work to get the product to where it needed to be so I was confident in the product. Having not even tested it, I just knew it would be a good package for me. We tested at Donington the week before the British GT round at Spa and the car was awesome! I am confident that the Mercedes-AMG GT4 is the right car to for ProTechnika Motorsport.”

“I also have fantastic support from Mercedes dealership Sandown Mercedes in Surrey and they are fully behind us.” 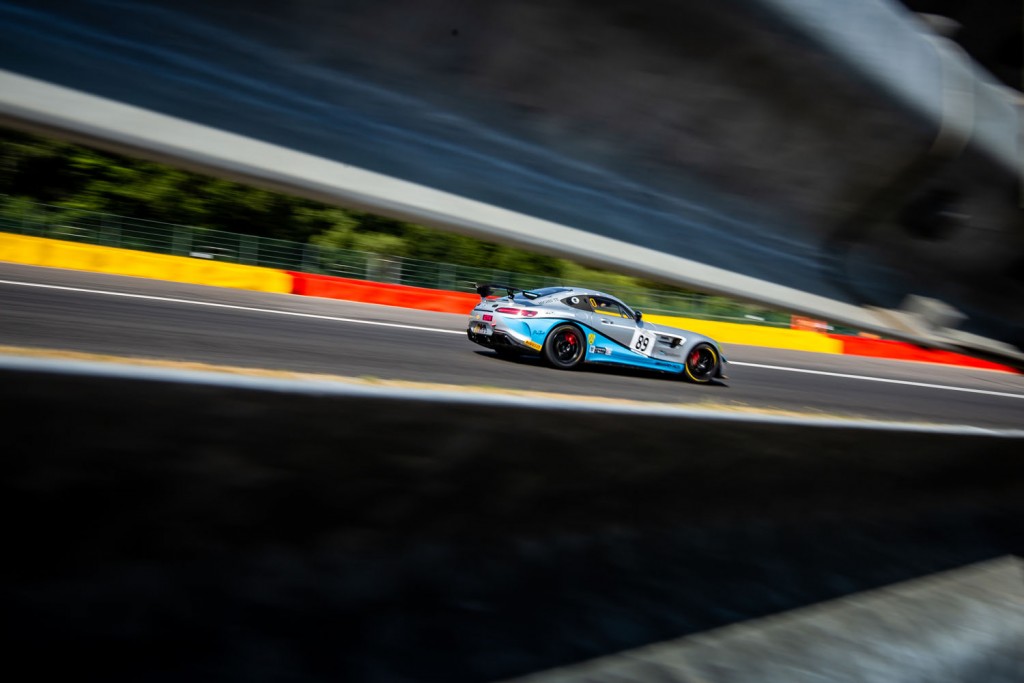 How have you currently structured the team in terms of location, staffing and day-to-day operations?

“At the moment I’ve got a workshop with full–time staff to prep the car before the races and I can then bring in additional staff for race weekends. Looking ahead, the view would then be to move everything and everybody to Bolton and run it from campus there and the students can then be involved from the start. We had a few students with us at Spa and I’d like us to have more but equally the ones that can’t make the races can be with us in the work-shop.”

Tom Canning is a young driver at the start of his career. What brought the two of you together?

“I do a lot of Ginetta Junior instructing and I was Tom’s first instructor when he was started racing Ginettas. I knew Tom from that contact and I knew he had stepped up to the British GT Championship. When he started looking at other options mid-season, his management team approached me knowing what I was going to do. I did want a young, up-and–coming driver to partner with rather than a gentleman-driver because, again, it goes back to the ethos of developing young people within the industry. Tom fits the bill perfectly and he’s super-fast.”

“Tom tested with me at Donington and he just gelled with the car and the team so well. At Spa he did a brilliant job. We’re talking about him driving for us next year which would be great because we would have continuity and the opportunity to develop Tom as a young driver. I’m really pleased with Tom, really pleased.”

Spa was probably the biggest stage that you could have chosen to launch the team but also the most logistically complicated, in comparison to, say, Brands Hatch….

“Logistically it wouldn’t have been such a headache (to launch at Brands Hatch) but what a way to launch the team! Everyone in the industry knows that to go out to Spa is quite an ask. I guess I was just confident with the people around me and it happened to all fall in place, although it was a manic six weeks! I would have delayed it, though, had it not been 100% right but we couldn’t have launched the team at a better track.”

Are you firmly focused on being both a team owner and driver, bearing in mind the demands of the individual roles?

“Yes, for the time being. I know what I want to achieve as a driver and I’ve not fully achieved that yet so as long as the focus doesn’t come away from the team and I can cope with running the team and driving the car, we’ll continue.”

“I have made it very clear to the team that when I am at a race weekend I’m driving and the buck stops with the Team Manager. Obviously I’ll step in if necessary but I want to be treated as a driver and they fully support me in that. The team were great at facilitating that over the Spa weekend and I guess it’s a test for everybody and for me. Will this work as a team owner and as a driver? I don’t know that until I’ve tried it. I think it stems down to who you have around you to run the show when I’m driving and I’m very fortunate to have some great team members around me.”

Now that ProTechnika Motorsport is launched, what are your plans for 2019 and 2020?

“We want to be in the British GT Championship in 2019, possibly with two cars for the economies of scale. Between now and the start of British GT next year, I’d like to do a couple of 24 Hour races and we’re looking at 24H COTA and the 24H Dubai. There is mileage in doing the Gulf 12 Hours and Bathurst just from a logistical point of view but it will be decided on budget and logistics. The amount of drivers we have interested in doing the 24H Dubai gives me confidence that we could pull that off. My personal opinion is COTA and Dubai would be the two if we were to do it properly and then have a winter test-programme in place with a view to going to back to British GT for a full attack on the Championship next year.”

“For the British GT Championship, running two cars would be better for us but I don’t want to run before we’re walking. We’re sticking to the one car for this year and, if we run that well, that gives us a platform to build on for next year.”

The British GT grid is next out on-track at Brands Hatch on August 4 – 5.

“The Future Is Bright” – Team HARD’s Anna Walewska Discusses The University of Bolton’s National Centre For Motorsport Engineering With EnduranceandGT. (01.05.18)

Photo: @BritishGT / Jakob Ebrey Photography Anna Walewska, now in her fourth season of the British GT Championship and team-mate of Callum Hawkins-Row in the #34 Team HARD with Trade Price Cars Ginetta G55 GT, is Brand Ambassador for the University of Bolton and its new National Centre of Motorsport Engineering (NCME). Anna’s role with […]

Balfe Motorsport has announced that the 2019 British GT Championship Pro-Am pairing of Graham Johnson and Michael O’Brien will return for the 2020 season, driving the #20 McLaren 570S GT4. Johnson and O’Brien finished runners-up in the Pro-Am standings last season. Graham Johnson took the GT4 title in 2016 when he partnered with Mike Robinson […]

The #17 TF Sport Aston Martin V12 Vantage GT3 driven by Derek Johnston and Jonny Adam took the top step of the podium after the team led from pole and drove a controlled race. In second place was the #33 Barwell Motorsport Lamborghini Huracán of Jon Mishaw and Phil Keen. Completing the podium positions was […]