The #8 Toyota Gazoo Racing Toyota TS050 – Hybrid with the driver line-up of Fernando Alonso, Kazuki Nakajima and Sébastien Buemi, won the 2019 edition the 24 Hours of Le Mans, The #8 car taking the chequered flag just under 17 seconds ahead of the sister #7 Toyota, piloted by Mike Conway, Kamui Kobayashi and Jose Maria Lopez.

The LMGTE Pro class, which had seen an enthralling battle for much of the race, saw the victory go to the #51 AF Corse Ferrari F488 GTE Evo, driven by Alessandro Pier Guidi, James Calado and Daniel Serra, son of former Formula One driver Chico Serra. Porsche GT Team took the remaining podium positions with #91 Porsche 911 RSR, driven by Richard Lietz, Gianmaria Bruni and Frédéric Makowiecki, finishing less than 50 seconds behind the #51 car and the sister #93 car of Patrick Pilet, Earl Bamber and Nick Tandy completing the top three.

An intriguing on-track battle between the #85 Keating Motorsports Ford GT, with the driver line-up of Ben Keating, Jeroen Bleekemolen and Felipe Fraga, taking the victory just under 45 seconds ahead of the #56 Team Project 1 Porsche with driver line-up of Jörg Bergmeister, Patrick Lindsey and Egidio Perfetti.

The podium positions in the LMGTE Am class were completed by the #84 JMW Motorsport Ferrari driven by Jeffrey Segal, Rodrigo Baptista and Wei Lu.

As the race entered its final two hours, the #7 Toyota held a lead of over two minutes from the sister #8 car and looked to be on course for victory. However a puncture and a faulty sensor that indicated a further tyre problem required two visits to the pits where the resulting delay allowed the #8 car to take the lead.

There was much discussion in the Toyota Gazoo Racing garage as to whether to allow the #7 car back through for the lead and speculation as to whether the incident had been orchestrated to allow a second win for the #8 car. As it was, the #8 car was allowed to continue in the lead and take the chequered flag.

The #26 G-Drive Racing Aurus 01 seemed to be in command of the LMP2 class with the #36 Signatech Alpine Matmut Alpine A470 in a comfortable second place and the the #38 Jackie Chan DC Racing ORECA in third.

A starter-motor issue for the #26 car meant a 20-minute delay in the garage and, when it rejoined, had dropped to seventh place. The #36 car took over the class lead and despite being pushed hard by the #38 Jackie Chan DC Racing ORECA, class winners in 2014 and 2017, was never in danger of losing the lead. 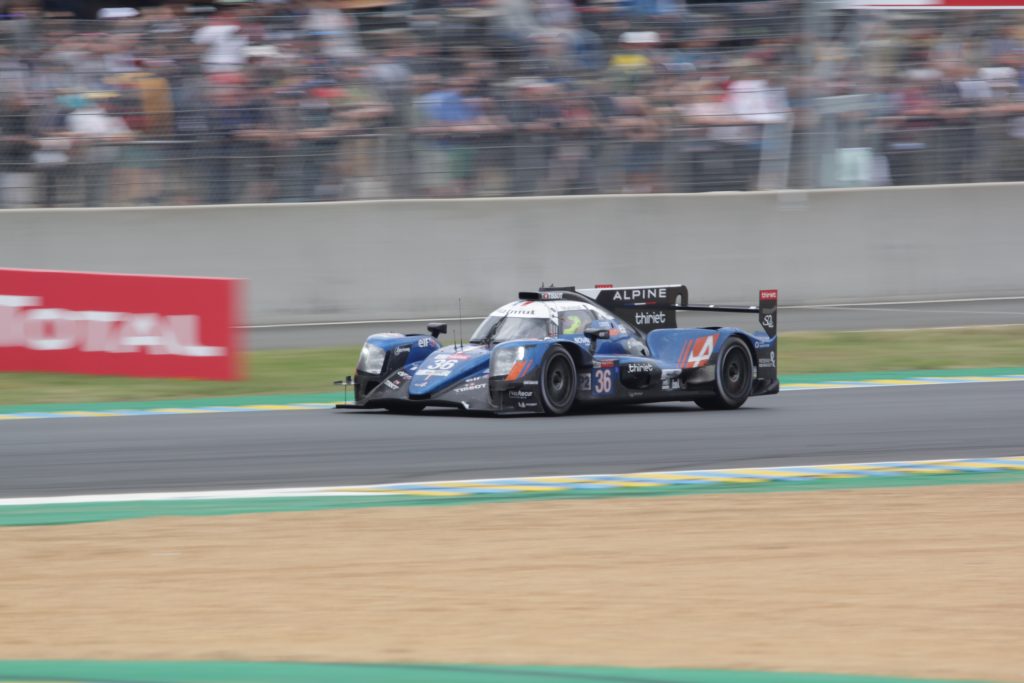 The LMGTE Pro battle was probably the most competitive across the four classes and, after four hour of racing, there was ten cars on the lead lap.

Disaster struck for Corvette Racing when the #64 Chevrolet Corvette C7.R made contact with the #88 Dempsey-Proton Racing Porsche which sent Marcel Fässler spinning into the wall and retirement. Fässler was thankfully unhurt but the car was damaged beyond repair. The sister #63 car also went off at the Porsche Curves, Jan Magnussen at the wheel. 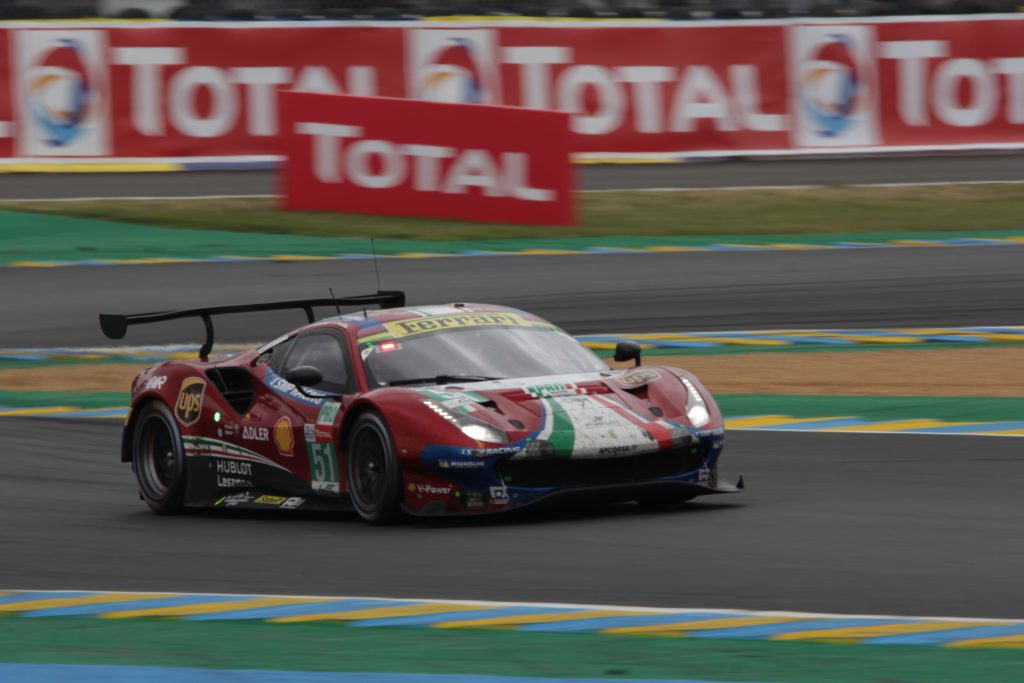 The incident promoted the #51 AF Corse Ferrari into the lead but the Porsche GT Team pushed the Ferrari hard. The win for AF Corse marked the 70th anniversary of the Maranello marques first entry in the 24 Hours of Le Mans.

The #85 Keating Motorsports Ford GT took the lead of the LMGTE Am class by the end of fifth hour of racing and held the lead to the end. As the race approached its final hours, the #85 carw as being chased by the #56 Project 1 Porsche. When the Ford GT was served with a penalty for wheel-spinning in the pit-lane, the incident appeared to hand the #56 car a life-line and, for a short time, the gap between first and second had closed to within five seconds. 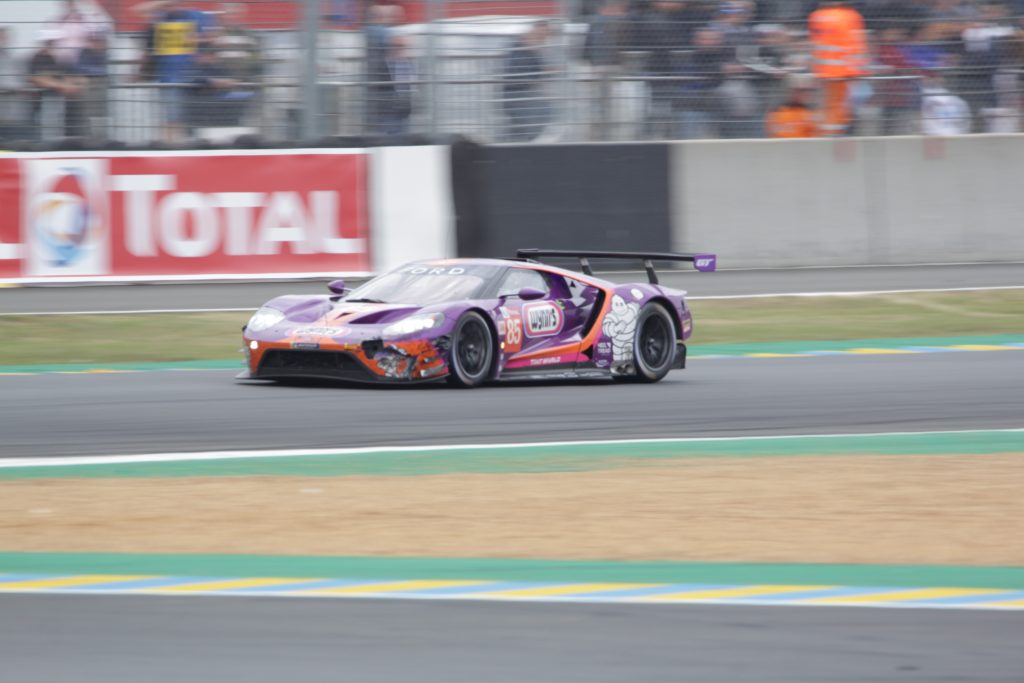 However Bleekemolen, at the wheel for the final stint, was not going to let the victory slip from his graps and he quickly pulled out the gap to over 120 seconds and the opportunity for the #56 Porsche was gone.

Porsche AG has announced that it will rejoin the senior class of endurance racing with an LMDh programme from 2023. The announcements means that it will be able to challenge for overall victories in both the FIA World Endurance Championship and the IMSA WeatherTech Sportscar Championship. The LMDh category, the initials standing for Le Mans […]

Photo: Roger Jenkins. Ate de Jong,  member of the driver line-up of the #25 Algarve Pro Racing Ligier JSP217 with teammates Mark Patterson and Taksung Kim, is feeling relaxed and confident as the countdown to the start of the 2018 running of the 25 Hours of Le Mans continues. For De Jong, who started his […]