In some of the best qualifying conditions seen at le Circuit de la Sarthe for many years, lap records tumbled and Kamui Kobayashi put the #7 Toyota Gazoo Racing TS050-Hybrid on pole for the 2017 running of the 24 Hours of Le Mans.

Kobayashi put in a 3:14.791 in the second qualifying session to set the new lap-record and take pole position. Lining up alongside Kobayashi will be the sister #8 Toyota Gazoo Racing TS050-Hybrid after Kazuki Nakajima lapped in 3:17.128 in the final qualifying session.

ORECAs dominated the LMP2 field in qualifying. The class grid will be headed by the #26 G-Drive Racing ORECA 07 after Alex Lynn put in a 3:25.352 in the final qualifying session. Second on the LMP2 grid will be the #25 CEFC Manor TRS Racing ORECA 07 after Vitaly Petrov lapped in 3:25.549 ion the second session. ‘Mighty #38’ Jackie Chan DC Racing will complete the top three in the LMP2 field after Ho-Pin Tung put in a 3:25.911. 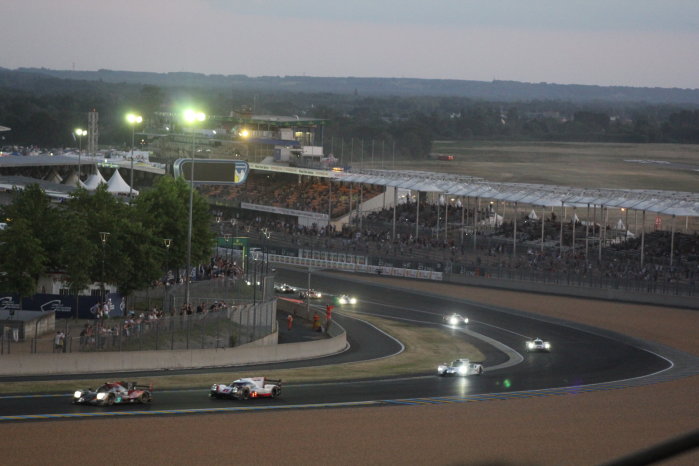 In a hotly contested LM GTE Pro field it was Aston Martin who came out on top after Darren Turner put in a 3:50.837 in the #97 Aston Martin Racing Vantage to take pole position. Second quickest in the LM GTE Pro field was the #51 AF Corse Ferrari F488 GTE after James Calado lapped in 3:51.028 in the third session.

Rounding out the top three in the LM GTE Pro field was the #95 Aston Martin Racing entry with Richie Stanaway at the wheel.

Aston Martin did not have it all its own way in the LM GTE field after Fernando Rees put the #50 Larbre Competition Chevrolet Corvette C7.R on pole in LM GTE Am with a 3:52.843.

Tomorrow is a rest day from track action with warm-up for the 24 Hours cars early on Saturday morning.

Photo: europeanlemansseries.com The crew of the #25 Algarve Pro Racing Ligier JSP217 attended Scrutineering in Le Mans town centre today on Monday June 11 in the middle of another torrential downpour that may have soaked the surroundings but did nothing to dampen the determination of the multi-national driving trio.. The line-up of American Mark Patterson, […]