The #8 Toyota Gazoo Racing Toyota TS050-Hybrid with the driver line-up of Sébastien Buemi, Anthony Davidson and Kazuki Nakajima took the chequered flag at the 6 Hours of Shanghai to win Round Eight of the 2017 FIA World Endurance Championship.

One lap back, in second place in the LMP1 category, was the #2 Porsche LMP Team Porsche 919 Hybrid of Timo Bernhard, Earl Bamber and Brendon Hartley.

Taking the final podium place in the premier class was the sister #1 Porsche 919 Hybrid, piloted by Neel Jani, André Lotterer and Nick Tandy.

The second and third places were enough to secure the World Manufacturers Championship for Porsche. 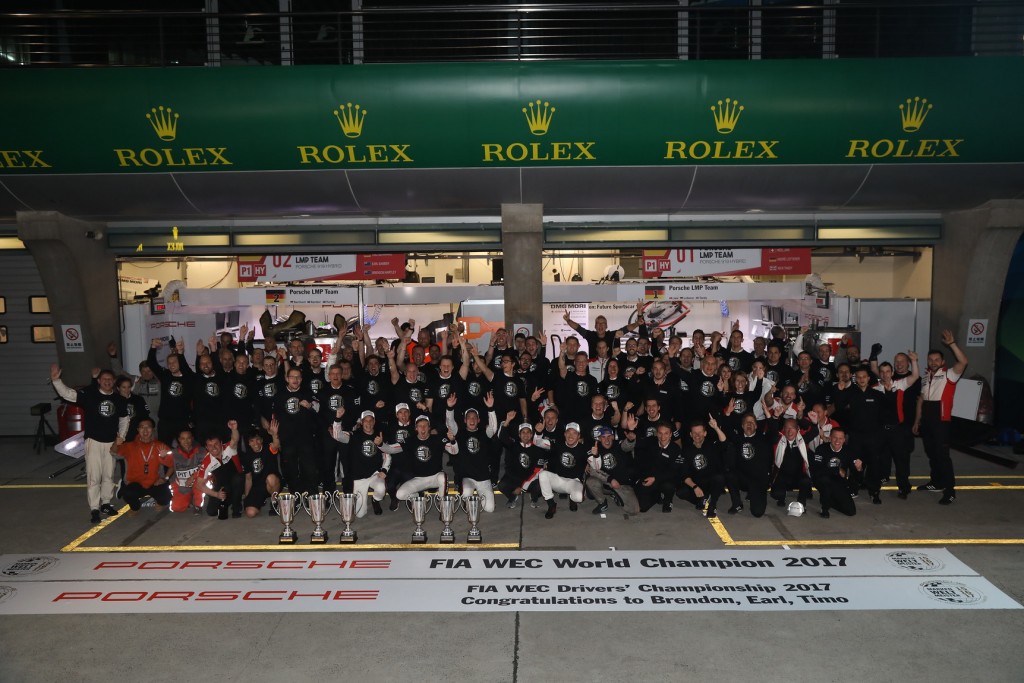 In LMP2 it was the #31 Vaillante Rebellion ORECA 07 with the driver line-up of Julien Canal, Nicolas Prost and Bruno Senna, that took the class victory, 35.280 seconds ahead of the #36 Signatech Alpine Matmut Alpine A470 piloted by Nicolas Lapierre, Gustavo Menezes and André Negrão.

Third place in the LMGTE class went to the #51 AF Corse Ferrari F488 GTE driven by James Calado and Alessandro Pier Guidi. Calado and Pier Guidi go to the final round of the 2017 FIA World Endurance Championship in Bahrain with a two-point lead in the GT Drivers Standings, ahead of Makowiecki and Lietz who left Shanghai on 133 points.

The Stuttgart manufacturer took second and third in the LMGTE Am class after the #77 Dempsey-Proton Racing Porsche 911 RSR (991) of Christian Ried, Matteo Cairoli and Marvin Dienst took the final podium position.

The final round of the 2017 FIA World Endurance Championship, the 6 Hours of Bahrain, takes place on November 16 – 18.

Photo: FIAWEC.com Porsche LMP team took a 1 – 2 at the fourth round of the 2017 FIA World Endurance Championship after the #2 Porsche 919 Hybrid, piloted by Timo Bernhard, Earl Bamber and Brendon Hartley took the chequered flag 1.606 seconds ahead of the #1 919 Hybrid with the driver line-up of Neel Jani, […]

Swiss racing team Rebellion Racing, 2017 FIA World Endurance Championship LMP2 champions, has announced that its LMP1 entry for the 2018/19 ‘Super Season’ will be an ORECA-designed-and-built chassis designated the Rebellion R 13. It will be powered by a Gibson engine. ORECA Group CEO Hughes de Chaunac is delighted at how the project has developed. […]

Victory in October 16’s 6 Hours Of Fuji, Round Seven in the FIA World Endurance Championship, went to the #6 Toyota Gazoo Racing TS050 driven by Stéphane Sarrazin, Mike Conway and Kamui Kobayashi. Second, and only 1.439 seconds behind at the chequered flag after 6 hours of intense racing, was the #6 Audi Sport Team […]