Kamui Kobayashi, at the wheel of the #7 Toyota Gazoo Racing Toyota TS050 Hybrid he shares with Mike Conway and Jose Maria Lopez, set the fastest time of the Free Practice session for the 2019 24 Hours of Le Mans after he lapped the iconic Circuit de la Sarthe in 3:18.091 in the closing seconds of the four-hour session, ahead of the #11 SMP Racing BR Engineering BR1 in which Stoffel Vandoorne set a 3:19.931.

Third quickest overall was the #3 Rebellion Racing Rebellion R13 in which Gustavo Menezes lapped in 3:19.960.

The pace in the 17-car LM GTE Pro class was set by Laurens Vanthoor in the #92 Porsche GT Team Porsche 911 RSR.

The #77 Dempsey-Proton Racing Porsche was quickest of the LM GTE Am class with Matt Campbell setting a 3:55.309.

The session got underway after heavy showers had swept across the region and there was the suggestion that rain would return during the four-hour practice. As a result, the Race Director declared the session wet.

There was drama for the #88 Dempsey-Proton Racing Porsche 911 RSR with Satoshi Hoshino at the wheel of the car he shares with Giorgio Roda and Matteo Cairoli when the Japanese Bronze-rated driver had an off-track excursion on the entry to the Porsche Curves after 62 minutes of the session. The practice session was neutralised under a Full Course Yellow for approximately five minutes.

Rain started falling down by Mulsanne Corner after 75 minutes of ther session and the firtst victim of the wet track was Kamui Kobayashi in the #7 Toyota Gazoo Racing Toyota TS050 – Hybrid who went off into the gravel. The pilot with the quickest lap of the modern circuit lay-out managed to get the #7 car back on the circuit and returned to the garage.

Light rain returned to the pit lane as Andre Lotterer put in a 3:21.257 in the #1 Rebellion Racing Rebellion R13 but clearly rain was still affecting the southern-most tip of the circuit as the #57 Car Guy Racing Ferrari F488 GTE went off at almost exactly the same place as the #7 Toyota.

The session was red-flagged after 98 minutes when Tracy Krohn in the #99 Dempsey-Proton Racing Porsche 911 RSR had a substantial accident at the entry to the second chicane. The session remained neutralised for 46  minutes to remove the stricken Porsche and clear up the debris. Krohn was unhurt and the damaged Porsche was returned to the garage.

Immediately prior to the #99 car incident, Gustavo Menezes put in the quickest time of the session with a 3:19.960 in the #3 Rebellion Racing Rebellion R13.

The #22 United Autosports entry saw very little running in the first two hours of the session, the Ligier suffering from an oil leak which risked an engine change. The issue was solved just in for heavy rain to fall and the session to be neutralised with the red flag. 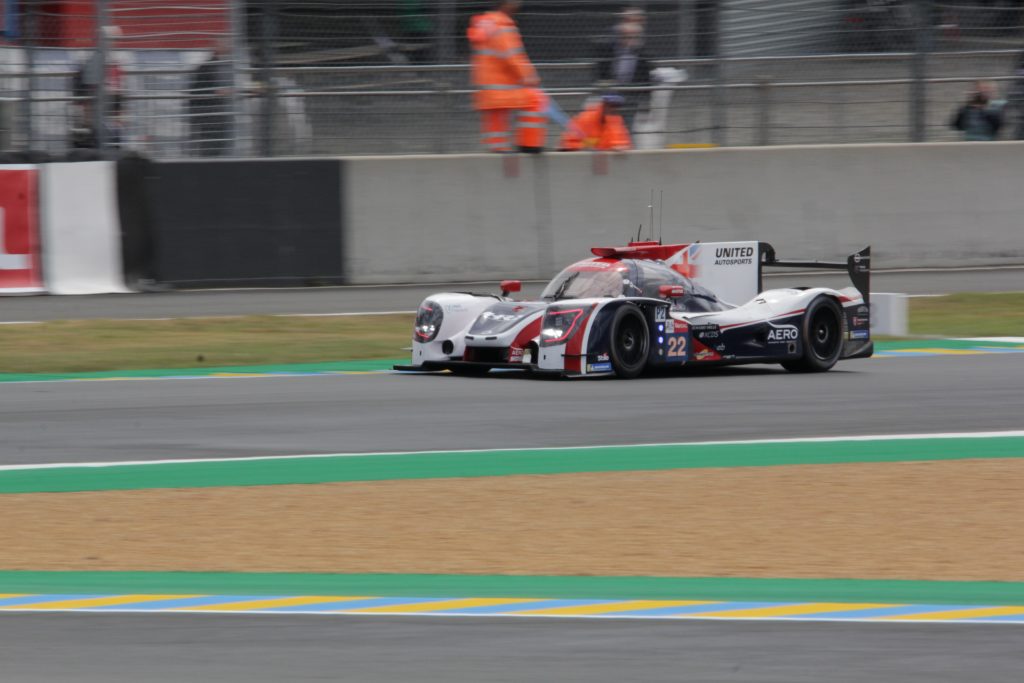 The practice session resumed after 46 minutes with over 90 minutes remaining and the threat that the session might be extended removed. However the track had been doused with rain in the pause so time was required to get the circuit rubbered back in.

With 67 minutes left the track was sufficiently dry enough for the #8 Toyota, with Sébastien Buemi at the wheel, came into the pits to switch to slicks.

As the session drew to a close, Kobayashi put in a 3:18.091 to set the quickest time of the session in the #7 Toyota.

The first qualifying session gets underway at 22:00 local time.

Photo: europeanlemansseries.com The crew of the #25 Algarve Pro Racing Ligier JSP217 attended Scrutineering in Le Mans town centre today on Monday June 11 in the middle of another torrential downpour that may have soaked the surroundings but did nothing to dampen the determination of the multi-national driving trio.. The line-up of American Mark Patterson, […]

Photo: Roger Jenkins If you are attending the 24 Heures du Mans in 2017, then don’t miss, whatever else you may be planning to do that day, the sixth “Virage de Mulsanne” event held on the iconic corner which bears the name of the local commune. The 2016 event drew crowds of over 4,000 to […]