As the 2019 24 Hours of Le Mans hit the nine-hour mark at 24:00 local time, it was the #7 Toyota Gazoo Racing Toyota TS050 Hybrid who led the field, Mike Conway at the wheel in the car he shares with Kamui Kobayashi and Jose Maria Lopez. Second overall was the sister #8 Toyota, driven by Sébastien Buemi   who sat 1:01.663 behind the #7 car.

The LMP2 class was led by the #26 G-Drive Racing Aurus 01, piloted by Job Van Uitert in the car he shares with Romans Rusinov and Jean-Eric Vergne. The #36 Signatech Alpine Matmut Alpine A470 lay in second place, 11.561 seconds behind. The top three were completed by the #31 DragonSpeed ORECA, with Roberto Gonzalez driving.

The highly competitive LMGTE Pro class had four manufacturers in the top four positions. The class was led by the #92 Porsche GT Team Porsche 911 RSR which led by 5.217 seconds ahead of the #51 AF Corse Ferrari F488 GTE Evo, driven by James Calado in the car he shares with Daniel Serra and Alessandro Pier Guidi. The #63 Corvette Racing Chevrolet Corvette C7.R completed the top three in class with the #67 Ford Chip Ganassi Team UK Ford GT in fourth in the hands of Jonathan Bomarito.

The only Ford GT in privateer hands led the LMGTE Am class with the Keating Motorsports #85 Ford GT, in the hands of Jeroen Bleekemolen, leading the #43 JMW Motorsport Ferrari.

As the race got underway, Mike Conway, in the #7 Toyota, started to pull away from the field and, by the end of the first hour, had opened up a gap of over 15 seconds to the sister #8 car. Of the non-hybrids, the #3 Rebellion racing Rebellion R13 was in third position, just over 12 seconds ahead of the #11 SMP Racing BR Engineering BR1.

After two hours the Toyotas had consolidated their lead with the #7 now over 36 seconds ahead of the #8 car. The #3 Rebellion R13 was leading the non-hybrid LMP1 field, holding a gap of nearly 40 seconds over the #11 SMP Racing BR Engineering BR1.

Driver changes occurred for the front-runners as the race approached the three-hour mark with Kamui Kobayashi taking over the #7 car and Fernando Alonso driving his first stint of the race, taking over from teammate Sébastian Buemi.

As 20:00 approached the LMP1 class had settled down and the two Toyotas led, the #7 car holding a lead of over 45 seconds over the #8 car. The two SMP Racing BR Engineering BR1s lay third and fourth with the two Rebellions fifth and sixth, the #3 Rebellion R13 holding a two-lap lead over the #1 car.

At 22:00, as darkness began to fall, the Toyotas continued to hold the overall lead with the #7 car now a little over 6 seconds ahead of the #8 Toyota TS050. 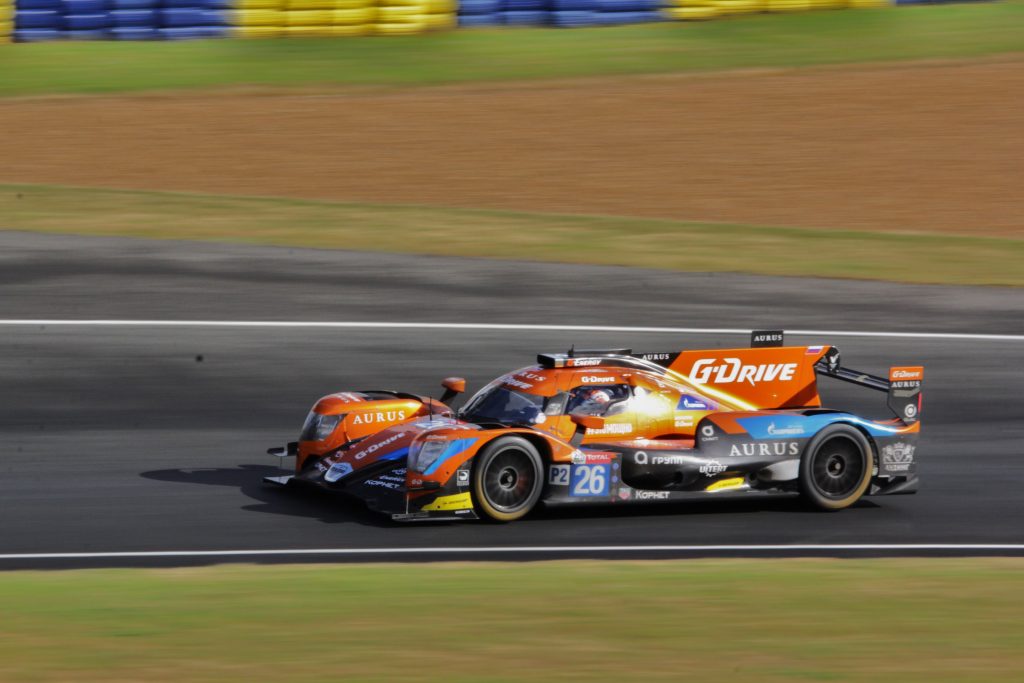 The Signatech Alpine Matmut continued to the lead in the LMP2 category after two hours, the #36 Alpine A470, with Nicolas Lapierre at the wheel, fending off the #26 G-Drive Racing Aurus.

As the end of the third hour approached, the #26 G-Drive Aurus held the class the lead with the championship-leading #36 Signatech Alpine Matmut in second place and the #37 Jackie Chan DC Racing ORECA in third.

The #63 Corvette Racing Chevrolet Corvette C7.R held the lead in the LMGTE Pro calls, les than half a second ahead of the Porsche GT team’s #92 and #93 Porsche 911 RSRs, after the first hour.

Close racing continued in the class as the race approached the two-hour mark with the #63 Corvette, driven by Antonio Garcia, leading the #93 Porsche with Michael Christensen at the wheel, by less than a second with the sister #92 Porsche, piloted by Nick Tandy, 9.353 seconds behind the #92 car.

The #63 Corvette started to pull out a lead as the third hour approached with the #67 Ford Chip Ganassi team UK Ford GT in second place, 12.848 seconds behind. Four manufacturers held the top four positions in the class with the #51 AF Corse Ferrari F488 GTE Evo in third place in class and the #93 Porsche GT Team Porsche 911 RSR in fourth. The surprise of the LMGTE Pro class, at this stage of the race, was the lack of pace of the Aston Martin Racing Aston Martin Vantage GTEs. The class pole-siting #95 car was lay twelfth in class and the sister #97 car was sixteenth.

Disaster struck Corvette Racing when Marcel Fässler, at the wheel of the #64 Corvette, had contact with the #88 Dempsey-Proton Racing Porsche, and had a heavy impact with the wall at the Porsche Curves. Fässler was thankfully unhurt but the #634 car was unable to continue. 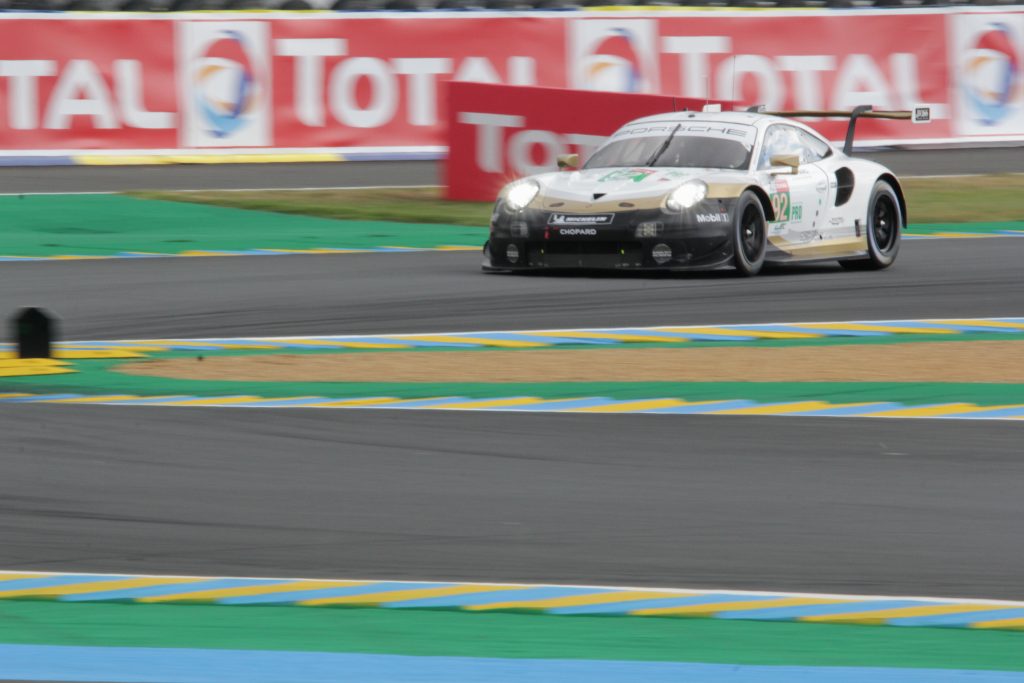 The LMGTE Am category, after one hour, was led by the #54 Spirit of Race Ferrari F488 GTE which was less than 2.5 seconds ahead of the #77 Dempsey-Proton Racing Porsche 911 RSR. 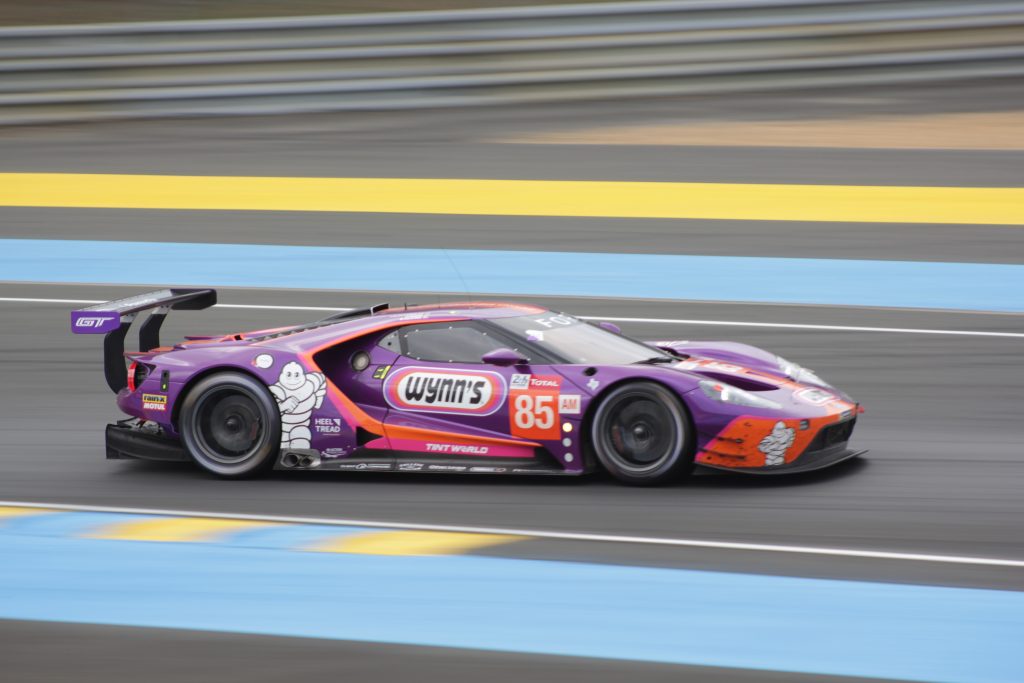 After 120 minutes of racing the #77 Dempsey-Proton Porsche now held the class lead, less than 20 seconds ahead of the #54 Spirit of Race Ferrari. The #77 car held on to a lead of just under 20 seconds after three hours of racing, this time ahead of the #85 Keating Motorsports Ford GT, the only Ford GT in privateer hands currently.