The #75 Optimum Motorsport Aston Martin V12 Vantage of Flick Haigh and Jonny Adam took its second victory of the 2018 British GT Championship season after Jonny Adam passed the #69 Barwell Motorsport Lamborghini Huracán GT3, driven by Johnny Cocker in the car he shares with Sam De Haan, for the lead with five minutes to go.

Cocker went on to finish second behind Adam, just under five seconds behind, with the #11 TF Sport Aston Martin, with Nicky him at the wheel in the car he shares with Mark Farmer, completing the podium positions, 10.273 seconds back.

Victory in the GT4 category, earning them their first podium finish of the season, went to the #501 Balfe Motorsport McLaren 570S GT4 driven by Graham Johnson and Mike Robinson with the #42 Century Motorsport BMW M4 GT4 driven by Ben Tuck and Ben Green taking second place, and the win in the GT4 Silver category, after a highly entertaining battle over the closing laps of the two-hour race. The #53 UltraTek Racing Team RJN took the final podium position of the GT4 class with Martin Plowman crossing the line just .166 seconds behind the #42 entry.

Flick Haigh, behind the wheel of the #75 Optimum Motorsport Aston, led the field away from pole position and immediately started to open a gap to Andrew Howard in the #99 Beechdean AMR Aston, a gap which had widened to over 12 seconds before a Safety Car was called to recover the stricken #88 Team HARD Ginetta G55 GT4 which had spun at Sheene Curve. The resulting neutralisation of the race lasted over 6 minutes by which time much of Haigh’s lead had been lost.

At the restart Graham Davidson, driving the #47 Jetstream Motorsport Aston Martin and winner of the previous round at Spa-Francorchamps, passed Andrew Howard in the #99 Beechdean entry and set about catching the #75 car. Drama was to follow, however, when, after just four minutes of the restart, there was a huge accident on the start-finish line following contact between the #44 Invictus Games Racing Jaguar F-TYPE SVR GT4 with Paul Vice at the wheel and the #50 HHC Motorsport Ginetta G55 GT4 driven by Mike Newbould.

Newbould was fortunate to walk away without serious injury from the massive shunt which destroyed the Ginetta and caused significant damage to the tyre barrier on drivers right opposite the pits. The Safety Car was again deployed, this time for over 14 minutes.

At the second restart Flick Haigh, unflustered by the additional pressure of seeing her substantial lead eroded to almost nothing, coolly started to extend a small gap to Davidson, which she had increased to over 2.5 seconds by the time the pit-window opened.

With the Jetstream entry hampered by a 20-second success penalty and the Optimum Motorsport with a 10-second penalty, the order was always gong to be shaken up after the driver changes. After the stops had cycled through, it was the #69 Barwell Motorsport entry, now with Johnny Cocker at the wheel, that held the lead but Jonny Adam, now in second, was to rarely let Cocker extend his lead by more than a second.

With Darren Turner holding on to third position in the #99 Beechdean car, Adam used all his skill and experience to bring the #75 car to within less than half a second of Cocker. Adam eventually took the lead at Westfield with five minutes to go.

Flick Haigh was delighted by the second win of the year for the #75 Optimum Motorsport after victory in the opening round at Oulton Park.

“I’m over the moon,” said Flick Haigh, “You can’t even dream of things like that. You hope that they happen but you just don’t know. So yes, a really, really good day!”

“Jonny told me to put my head down, don’t look in the mirror and don’t make any mistakes and that’s what I did. I just focused on each corner and what I had to do and kept doing it. When I looked in the mirror I realised I did have a gap. Things like the Safety Car happen and you just have to deal with them.”

“When you have that amount of time behind the safety car, you have time to think and regroup and your tyres and brakes cool down. I knew I had to do the same as I’d done before – make no mistakes, and be accurate and that’s what I did. I was conscious we had this 10-second penalty and wanted to help with that as much as I could.”

The GT4 battle in the first half of the race was dominated by Century Motorsport with the #42 and #43 BMW M4 GT4s leading for the first 60 minutes, driven by Ben Green and Dean Macdonald respectively. After the driver changes had cycled through, it was the #501 Balfe Motorsport McLaren 570S GT4, driven by Graham Robinson, that led the class followed by Martin Plowman in the #53 UltraTek Team N Nissan 370Z GT4. A titanic battle for second and third place, with less than five minutes, saw Ben Tuck in the #43 Century Motorsport entry move into second place with Plowman relegated to third. 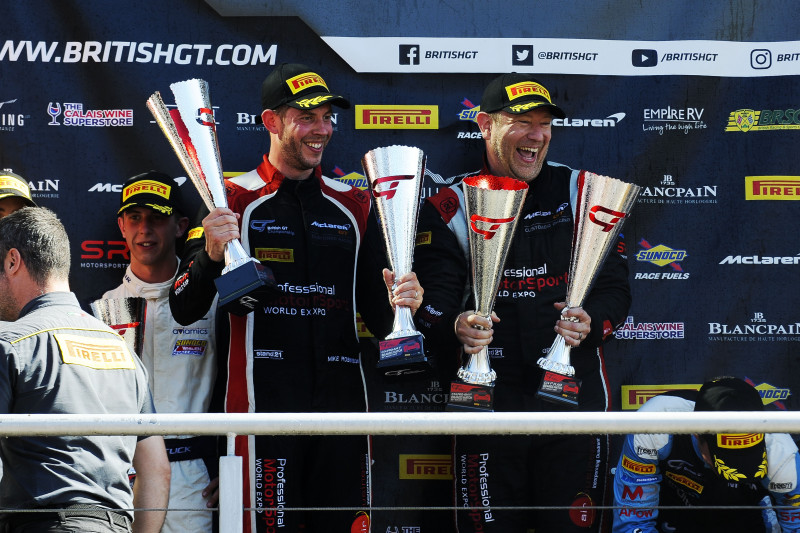 Class winners Johnson and Robinson revealed during the second half of the race that the car was suffering from what was possibly a suspension issue but that they had  managed to find a way to drive round the problem.

Jon Minshaw and Phil Keen, leaders in the GT3 Drives Championship going in to Round Eight, had a disappointing race with the #33 Barwell Motorsport Lamborghini having to be retired with 20 minutes remaining.

Winners at Spa-Francorchamps, Jetstream Motorsport, also suffered disappointment after a strong opening stint from Graham Davidson when debris pierced the wind-screen of the #47 car while Maxime Martin was driving and for safety reasons, the car had to be retired with 30 minutes to go.

The British GT Championship now moves to its final round at Donington on September 22 – 23.

Photo: Sebastien Bassani / ACO Kamui Kobayashi put in a 3:17.161 in the #7 Toyota Gazoo Racing Toyota TS050 Hybrid he shares with Mike Conway and Jose Maria Lopez to take provisional pole position for the 2019 24 Hours of Le Mans. Provisionally starting alongside the #7 car will be the #17 SMP Racing BR […]

Photo: 24HSERIES.com With the FIA World Endurance Championship Prologue being held on weekend of April 1 – 2 at Autodromo Nazionale Monza, the Media Day launch for the British GT Championship at Snetterton on Tuesday March 28 (which also coincides with Day One of the Official Test for the European Le Mans Series) and the […]

Owner and editor of EnduranceandGT.co.uk Andy Lloyd has announced the launch of EGT Communications, a new motorsport-focused PR and media venture. “Having worked closely with a number of teams, drivers and organisations aligned with motorsport, I know how important it is to make sure that your message is focused, targeted and clear,” said Andy Lloyd. […]