2016 champions TF Sport set the quickest time in Free Practice 2 for Round 3 of the 2917 British GT Championship in a session that was interrupted twice.

Prior to the interruptions, however, was the news that the #33 Barwell Motorsport Lamborghini Huracán GT3, which set the quickest time in FP1, would not be out for the session as technical issues had necessitated an engine change.

The session, which started at 11:45, was red-flagged after 25 minutes, to retrieve the beached #42 Autoaid/RCIB Insurance Racing Aston Martin Vantage GT4 in which William Phillips ‘ran out of talent’ at going into Gracelands. 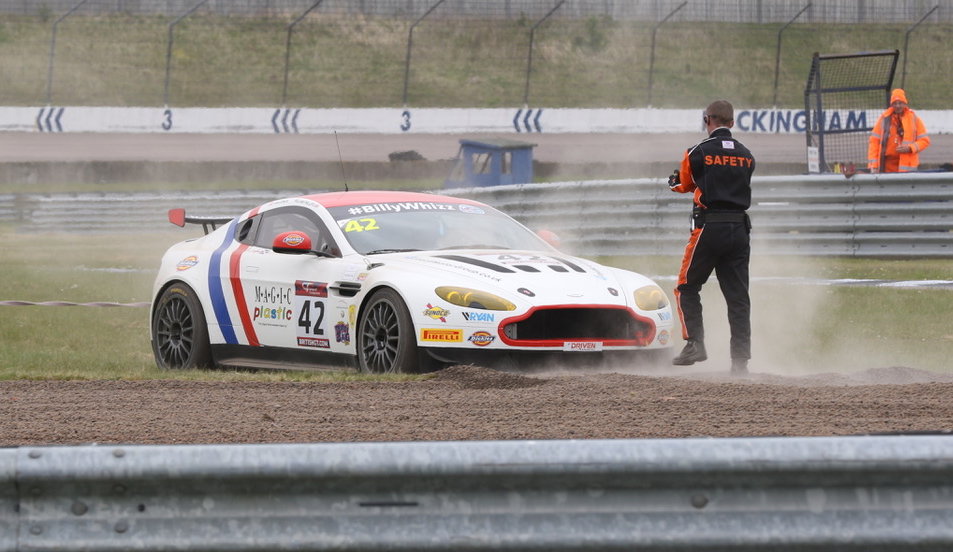 The session was neutralised a second time with 25 minutes to go after Marcus Hoggarth in the #29 In2Racing McLaren 570S GT4 understeered coming out of the hairpin and put the car sideways into the barrier. The car was recovered back to the garage with early reports of little front-end damage. However with damage to the side to repaired, the team has got significant work to do to get the car prepared for GT4 qualifying at 16:03.

With times that did not match those of the earlier practice session, quickest on the GT3 s was the #1 TF Sport Aston Martin Vantage GT3 in which Jonny Adam set a 1:17.885. Second quickest was the #6 Barwell Motorsport Lamborghini Huracán GT3 in which Sam Tordoff set a 1:18.472.

Completing the top three in class was the TF Sport sister car, the #11, in which Jon Barnes set a 1:18.504 as the session drew to a close.

PMW Expo Racing / Optimum Motorsport again set the pace in the GT4 category after Graham Johnson set a 1:23.504 before handing the car over to Mike Robinson.

Photo: BritishGT.com / Jakob Ebrey 2016 British GT champions Jonny Adam and Derek Johnston took their first victory of 2017 in Round 5, the second British GT race of the day in the #1 TF Sport Aston Martin Vantage GT3 at warm and sunny Snetterton in the . Second across the line was the #6 […]