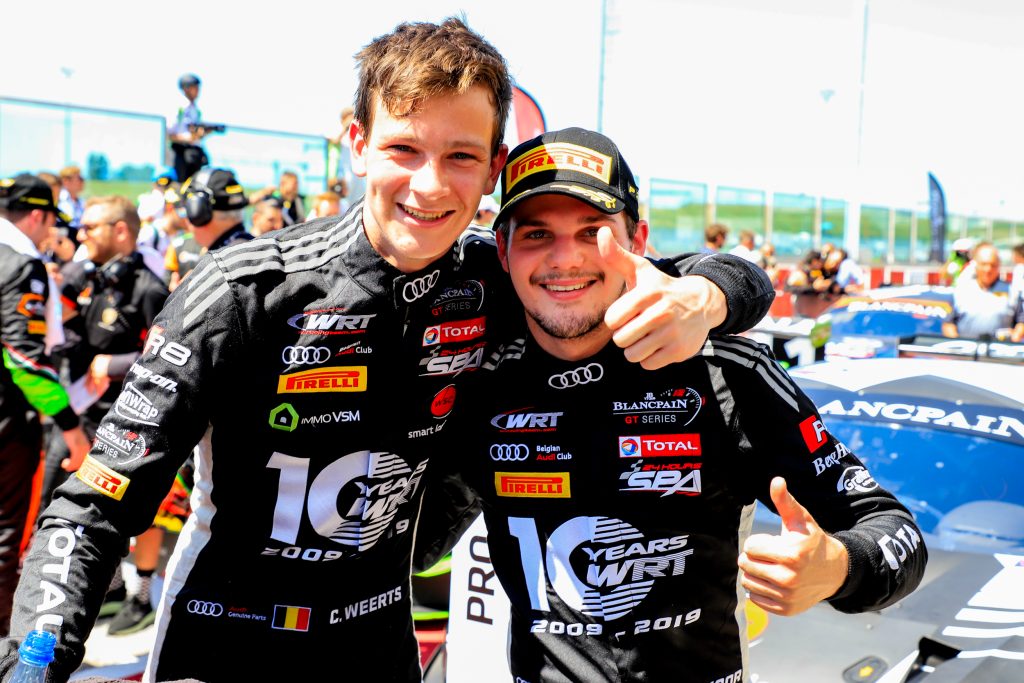 Class honours in the Pro-Am category went to the #519 Orange 1 FFF Racing Team Lamborghini of Hiroshi Hamaguchi and Phil Keen while HB Racing’s Florian Scholze and Wolfgang Triller won the Am Cup category in the #444 HB Racing Ferrari F488 GT3.

Raffaele Marciello, piloting the #88 AKKA ASP Team Mercedes-AMG GT3, led the field away from pole position but Marcus Winkelhock, driving the #26 Sainteloc Racing Audi R8 LMS, spun after contact with Jim Pla in the #87 AKKA ASP team Mercedes. The incident was investigated by the stewards and Pla was served with a drive-though penalty for causing the collision at Turn 8.

After four laps Marciello had pulled out a small gap from Dries Vanthoor in the #2 Belgian Audi Club Team WRT Audi.

The winners of Race One, the #563 Orange 1 FFF Racing Lamborghini Huracán GT3, driven for the opening stint by Marco Mapelli, was pushing Fabian Schiller in the #90 Silver Cup AKKA ASP Team Mercedes for fifth place.

After nine laps, Marciello had settled into the lead and the gap to Vanthoor in the #2 car had increased to nearly two seconds.

A Full Course yellow and Safety Car was called after 23 minutes of racing after contact between Nick Foster in the #55 Attempto Racing Audi and Kelvin van der Linde in the sister #66 entry left debris on the circuit. The driver change window was delayed by three minutes as a result of the Safety Car and racing resumed after five minutes.

Despite Marciello working hard to maintain his lead throughout the first half of the race, there was disaster for AKKA ASP Team when it appeared that the pit crew were not ready for Marciello at the driver change. As a result, a delay in getting teammate Vincent Abril away meant that the #88 car rejoined in 23rd position.

After the driver changes had cycled through, it was Charles Weerts in the #2 Audi who held the lead.

With eight minutes of racing remaining, Andrea Caldarelli found a way past Simon Gachet in the #25 Sainteloc Racing Audi. Caldarelli then started to hunt down Charles Weerts in the leading #2 WRT Audi who, by that stage, had a lead of over 3.4 seconds. The gap started to close and after 33 laps, the Italian driver and Team Principal was within three seconds of the young Belgian pilot. Weerts remained calm, however, and the #563 car was never close enough to mount a serious challenge for the lead as the race drew to a conclusion.

Orange 1 FFF Racing Team’s Andrea Calderelli and Marco Mapelli have extended their lead at the top of the Blancpain GT Drivers standings and now have an 18-point margin to BLACK FALCON’s Maro Engel and Luca Stolz.

In the Silver Cup category AKKA ASP Team’s Nico Bastian has a commanding lead in the drivers standings and sits on 131.5 points, 22.5 points ahead of Timur Bogulavskiy.

Jim Pla leads the Pro-Am Cup drivers standings on 76.5 points, courtesy of a pair of fifth-place finishes at Misano and is 9.5 points ahead of AF Corse’s Andrea Bertolini and Louis Machiels.

The 2019 Blancpain GT Series grid next assembles at Zandvoort on July 12 – 14 for two rounds of World Challenge Europe competition.

The unseasonable weather sweeping across Europe that had caused race-goers at the FIA World Endurance Championship round at Circuit de Spa-Francorchamps to open their eyes this morning to a blanket of snow, caused havoc in the second Free Practice session for the 2019 Blancpain GT World Challenge Europe season-opener at Brands Hatch. Maro Engel in […]

Blancpain GT World Challenge Back On Circuit At Misano (26.09.19)

Photo: Blancpain GT Series The 2019 Blancpain GT Series gets back on track after the pre-24 Hours of Le Mans round at the Circuit Paul Ricard 1000kms with Round Five at Misano World Circuit Marco Simoncelli. For a series that got underway in Mid-April at Monza, this is only the second weekend for the World […]