Leaders in the GT3 drivers standings going into the penultimate round at Brands Hatch, Sam De Haan and Jonny Cocker in the #69 Barwell Motorsport Lamborghini Huracan GT3, finished eighth while the sister #72 car, piloted by Adam Balon and Phil Keen, crossed the line in fourth.

Graham Davidson, at the wheel of the #47 TF Sport Aston V8 Vantage GT3 got off to an excellent start, moving up to second from fourth on the grid at the start on the first lap with Shaun Balfe in the pole-sitting #22 Balfe Motorsport McLaren 720S GT3 falling back to third and Ollie Wilkinson in the #96 taking the lead. Wilkinson then started to pull out a gap to Davidson and after four laps was over 4.5 seconds ahead of the #47 Aston martin.

In the GT4 category, Ash Hand in the #97 TF Sport Aston Martin had taken the lead from the pole-sitting #57 HHC Motorsport McLaren 570S but Josh Smith in the #4 Tolman Motorsport was pushing hard in second and was just 1.296 seconds behind after six laps.

A Safety Car was called with just under 20 minutes run after the Glynn Geddie had a big accident at Westfield. As the field slowed behind the Safety Car, Ollie Wilkinson, at the wheel of the leading #96 Aston Martin, spun at the bottom of Paddock Hill Bend, allowing Graham Davidson in the #47 car to take the lead.

Davidson held on to the lead at the restart and brought the #47 car in for the driver changes in first place, the Aberdeen-based driver being recognised as Blancpain Driver of the weekend as a result.

With a little over 37 minutes remaining Jonny Adam, in the #47 TF Sport Aston Martin, held a lead of five and a half seconds over the Rob Bell in the #22 Balfe Motorsport McLaren 720S GT3 with Jack Mitchell in the #9 Century Motorsport BMW completing the top three.

A close-fought on-track battle was taking place between Phil Keen in the #72 Barwell Motorsport Lamborghini and Jonny Cocker in the sister #69 entry. Keen was on the rear bumper of Cocker throughout most of the second half of the race as both drivers had to contend with traffic. Keen, however, was not giving up and made a move round the outside of Cocker at Hawthorns on the final lap to finish fourth. The move seemed to unsettle Cocker who finished eighth. 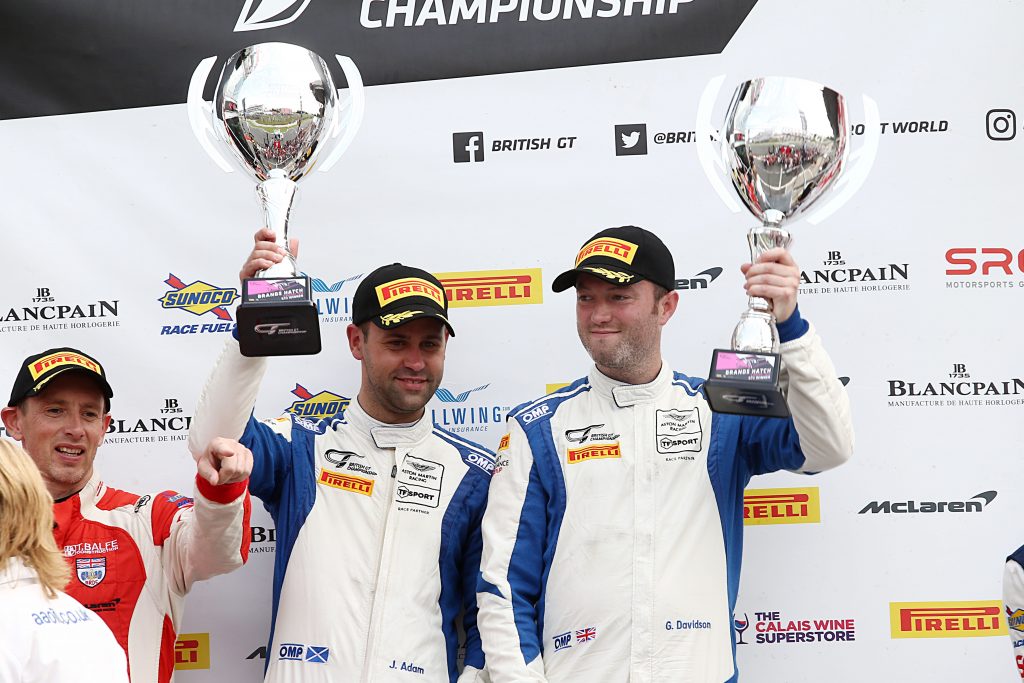 The action started before most of the grid had passed the start/finish line when the #95 TF Sport Aston Martin with Josh Price at the wheel made contact and went off the circuit to drivers left. Price had to retire shortly after.

The sister car, the #97 Aston Martin with Ash Hand at the wheel, took the lead shortly after the start.

However, the Safety Car period coincided with the GT4 driver change window and the #62 Academy Motorsport Aston Martin, having timed its driver change perfectly, was able to enter the second half of the race with a commanding lead.

Victory looked certain for Will Moore but for a brake failure at Paddock Hill Bend which resulted in the #62 Aston Martin spinning off into the gravel, contacting the barrier and retiring.

The #4 Tolman Motorsport McLaren with James Dorlin at the wheel assumed the lead with second place going to the #57 HHC Motorsport McLaren, Dean Macdonald earning the Sunoco Fastest Lap Award during his stint.

The final podium position was taken on the road by the #15 Multimatic Motorsports Europe Ford Mustang driven by Seb Priaulx and Scott Maxwell. However, a technical infringement at the pit stop meant that the #15 crew were given a 40-second post-race penalty, demoting Priaulx and Maxwell to ninth overall in the GT4 classification.

The final round of the 2019 British GT Championship takes place at Donington on September 14 – 15.

The British GT Championship has announced live coverage of the UK rounds of the 2017 season by Front Runner, the UK’s only free-to-air sports channel. Coverage will start from the opening rounds at Oulton Park on April 17. Live coverage will also be offered from Rockingham and Snetterton before the championship’s blue riband event, the […]