Great Bookham-based Barwell Motorsport opened the 2017 British GT Championship season with a dominant performance, finishing 1 -2 at Oulton Park in a race that tested the abilities of amateur drivers and team strategists alike.

First across the line in a race that it led from the opening seconds was the #33 Barwell Motorsport Lamborghini Huracán GT3 with Phil keen at the wheel, Jon Minshaw having started the race. Second was the sister #6 Huracán in which GT rookie, although highly experienced sprint racer, Sam Tordoff fended off the eventual third place GT3 finisher, Jonny Adam in the #1 TF Sport Aston Martin Vantage GT3.

Nobody seemed to want to win the G4 class, with stop-go penalties being handed out for short pit-stops by the Race Director, and it was the #72 track-club McLaren 570S GT4 that took the class win with Adam Mackay at the wheel, fellow driver Adam Balon having taken the opening stint.

Second in the GT4 class was the #55 HHC Motorsport Ginetta G55 GT4 with Stuart Middleton taking the chequered flag. Third in class was the #62 Academy Motorsport Aston Martin Vantage GT4 drive by Matt Nicoll- Jones, who took the car to the finish, and Will Moore.

The one-hour race started in the wet with pole-sitter Rick Parfitt Jnr in the #31 Bentley Continental GT3 having no answer to the pace in the wet of the #33 Barwell Motorsport entry with Jon Minshaw at the wheel. The Lamborghini quickly pulled out a 4-second which it continued to increase to over 26 seconds by the time the pit-window opened.

By the time the pit-window was closed and the driver changes had cycled through, the two Barwell Motorsport entries were lying first and second with the 2016 GT3 champions TF Sport in the #1 Aston Martin Vantage third, Jonny Adam having taken over from Derek Johnston. Johnston had driven a superb first stint and had taken the #1 Aston Martin from eleventh on the grid at the start to sixth at the driver changes. Adam pushed in the final minutes of the race and closed the gap to Tordoff to just under 3.5 seconds but, coming under pressure from Morris in the #31 Bentley, wisely chose to focus on keeping the third podium slot. 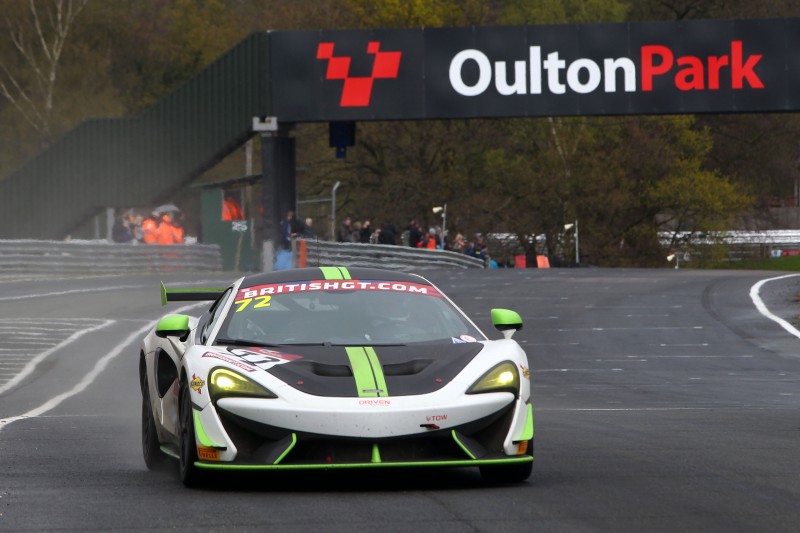 The GT4 class was being led by the #100 Black Bull Garage 59 McLaren 570S GT4 with sandy Mitchell taking the opening stint until issues with the left rear wheel at the pit-stop forced a delay at the driver change.

The #62 Academy Motorsport Aston Martin Vantage GT4 with Matt Nicoll-Jones driving took the class lead but was served a stop-go penalty for spending too little time in the pits at the driver change. The #72 track-club McLaren 570S GT4 also suffered the same fate. However the lead that the #72 car had established meant that it retained the lead, even after the penalty had been served, and went on to take the class win.

The second race of the afternoon takes place at 15:30

“I’ve Enjoyed It Way More Than I Thought” – Century Motorsport’s Mark Kimber Talks To EnduranceandGT About His First Year In British GT. (09.06.19)

Photo: British GT Championship / Jakob Ebrey Photogrpahy Jonny Cocker, at the wheel of the #69 Barwell Motorsport Lamborghini Huracán GT3 Evo he shares with Sam De Haan, set the quickest time in FP2 for the opening rounds of the 2019 British GT Championship at Oulton Park. As the 60-minutes session entered its final quarter, […]