Young Canadian driver Scott Hargrove, driving the #96 Pfaff Motorsports Porsche 911 GT3 R, won on his debut in the GT class of the 2018 Pirelli World Challenge, crossing the line 3.918 seconds ahead of Toni Vilander in the R. Ferri Motorsport Ferrari 488 GT3.

The GTA class saw a win for Martin Fuentes in the #07 Squadra Corse Garage Italia Ferrari 488 GT3, 8.231 seconds ahead of Rodrigo Baptista in the K-PAX Racing Bentley Continental GT3. Yuki Harata rounded out the podium positions in the GTA class in the Dream Racing Motorsport Lamborghini Huracán GT3.

The opening round of the 2018 Challenge was marred with a first corner incident which saw multiple contacts. 2016 GT champion Alvaro Parente in the #9 K-Pax Racing Bentley Continental GT3, Spencer Pumpelly in the #00 TRG Aston Martin Vantage GT3 and the #19 TruSpeed Motorsports Audi R8 LMS, driven by Parker Chase, were all unable to continue following the incident.

The ensuing clearing of the track took 18 minutes during which the race was neutralised behind the safety car. At the re-start Daniel Morad in the #2 CRP Racing Mercedes took the lead ahead of Hargrove and Vilander. Hargrove, pushing hard, took the lead into T1 on lap 18.

Toni Vilander, in the #61 R. Ferri Motorsport Ferrari, kept Hargrove honest throughout the race and set a new lap record of 1:12.059 in his attempt to take the lead. Hargrove held on to the lead up to the chequered flag, however, to take his first Pirelli World Challenge victory.

Hargrove was delighted at how race unfolded.

“In qualifying I clipped the wall just enough to collapse the front suspension but my mood had done a 360,” said the Tsawasson, BC resident. “I definitely had a feeling that we could have been on pole today. I’m thrilled with the win because the car is flawless. I was able to put the laps down when I needed them and I’m pretty excited for tomorrow (the second round). I don’t think there is much of a learning curve for me because I come from a sprint racing background. It’s not the same as a lot of these guys that come from endurance racing and it’s a shock (at how aggressive it is).” 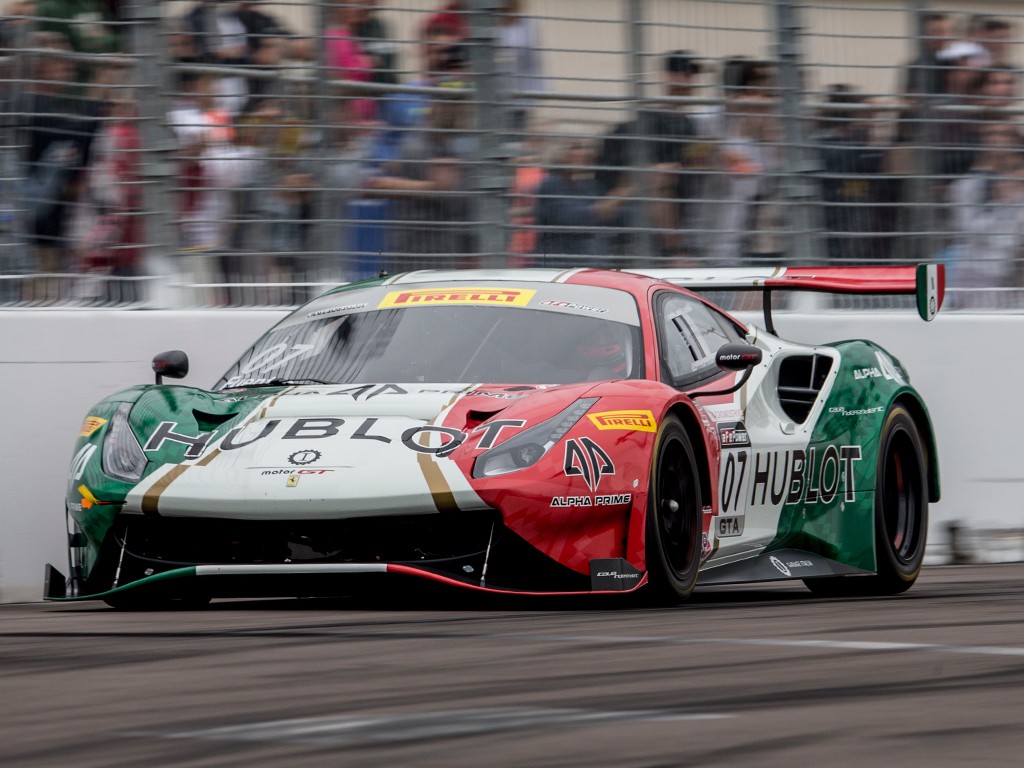 In the GTA class, Martin Fuentes, driving the #07 Squadra Corsa Garage Italia Ferrari F488 GT3, stood on the top step of the podium, after having started from the back of the class grid.

“I knew every start here at St Pete is hairy,” said the driver from Mexico City. “I knew I had to pay attention in the front and definitely St. Pete took its customers. I just watched, tried to find the gap, saw some crashing on the left and on the right. I saw the curve was clear and saw the other guy spinning so I just stomped on the gas to get through there and to get myself out of trouble. This is the time I’m driving (the Ferrari F488 GT3) with TR3 and I’m very excited.”

The #31 TR3 entry, driven by Daniel Mancinelli, was withdrawn ahead of qualifying following a dispute over additional ballast.

Photo: world-challenge.com Patrick Long clinched the Overall GT Drivers Championship and Michael Cooper won twice at Sonoma Raceway on September 16 – 17 as the 2017 Pirelli World Challenge drew to a close for the GT classes. Cooper, driving the #8 Cadillac Racing Cadillac ATS.V-R took the lead shortly after the start in Race One […]

Lawson Aschenbach, driving the #10 Blackdog Speed Shop Chevrolet Camaro GT4, won the first race of the weekend for the GTS class in Pirelli World Challenge at Mid-Ohio Sports Car Course in Lexington, Ohio. Second across the line was the Ian James in the #50 Team Panoz Racing Panoz Avezzano GT. Taking the final podium […]