Southport-based Ben Wallace is approaching the final round of the 2018 British GT Championship determined to finish the season on a high note with a top ten result in the GT4 class.

Wallace, currently lying twelth in the GT4 Silver Drivers’ standings, will be racing alongside Graham Roberts for the two-hour season finale at Donington Park in the #88 Team HARD 2016-spec Ginetta G55 GT4.

Despite lacking some driver aids, Ben Wallace is looking forward to the challenge of the 4 km Leicestershire circuit.

“I’ve driven the Ginetta G55 GT4 at Donington for the 2018 Media Day but, for this round, I’ll be driving a 2016 car so we won’t have traction control and ABS and it will require a different driving style,” said Ben Wallace. ”It will be something to get used to as I won’t be able to brake as late as I would have with the 2017 car and I’ll have to be easier and more progressive with the power. It will be a challenge, for sure, but I’ll get used to it and overcome it.”

Ben will be carrying the logo of Diabetes UK on his Ginetta, as he has throughout the season, supporting the work of the leading UK charity for people affected by diabetes. Ben is proud to be a role model for aspiring professional athletes who work with diabetes.

“With any condition, nothing is impossible,” said Ben, who supported fund-raising for Diabetes UK at the Ormskirk Motorfest in August. “If you want to achieve something you can, no matter what the illness. Anything is possible.” 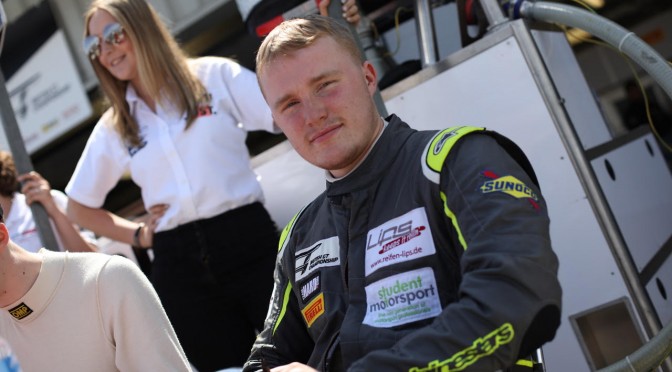 Ben is targeting a strong finish at Donington Park on September 23.

“If we could get a top ten for this weekend I’ll be finishing on a massive high,” said Ben. “We’ve only had one top ten result this year so to get another would be amazing. I’m not sure the pace will be in the car to aim for the top five or a podium so realistically a top ten would be really good.”

Track action for the final round of the 2018 British GT Championship gets underway at 09:40 on Saturday September 22 with qualifying beginning at 15:45.

The lights go out for the two-hour race at 13:35 on Sunday September 23. Live timing can be found at www.tsl-livetiming.com throughout the weekend with qualifying and the race being live-streamed via the British GT Championship Facebook page.

EnduranceAndGT.co.uk editor Andy Lloyd recently spoke with Rick Parfitt Jnr. to discuss his season with Team Parker Racing in the 2016 British GT Championship driving the Bentley Continental GT3 where he and Seb Morris finished joint third in the GT3 Drivers Championship. Now that the dust has settled on this season, did the decision to […]

“The Future Is Bright” – Team HARD’s Anna Walewska Discusses The University of Bolton’s National Centre For Motorsport Engineering With EnduranceandGT. (01.05.18)

Photo: @BritishGT / Jakob Ebrey Photography Anna Walewska, now in her fourth season of the British GT Championship and team-mate of Callum Hawkins-Row in the #34 Team HARD with Trade Price Cars Ginetta G55 GT, is Brand Ambassador for the University of Bolton and its new National Centre of Motorsport Engineering (NCME). Anna’s role with […]

Shaun Balfe and Rob Bell put the #22 Balfe Motorsport McLaren 720S GT3 on pole position for the final round of the 2019 British GT Championship, Balfe and Bell lapping .615 seconds quicker on aggregate from the #72 Barwell Motorsport Lamborghini Huracán GT3 driven by Adam Balon and Phil Keen. Completing the top three on […]