Miguel Molina, in the #61 R. Ferri Motorsports Ferrari F488 GT3, finished second, 8.405 seconds back, in the car he shared with Toni Vilander.

Scott Hargrove, at the wheel of the #58 Wright Motorsports Porsche 911 GT3 R, got the jump on pole-sitter Andy Soucek in the #9 K-PAX Racing Bentley to take the lead at Turn Eight on the opening lap. The Canadian driver then pulled out a gap of over 1.5 seconds to Soucek by the fifth lap.

Race Control, however, reviewed the start and, on the sixth lap, required Hargrove to hand the position back to Soucek, the swap happening a lap later.

“Scott did a great job but unfortunately the race officials didn’t agree,” said teammate Patrick Long as the lead was handed over.

In the Pro-Am category Anthony Imperato drove the #91 Wright Motorsports Porsche into the class lead during the opening laps and had pulled out a gap of over 1.6 seconds to Till Becthtolsheimer in the #5 Gradient Racing Pro-Am Acura NSX.

As the pit window approached Soucek was just under three seconds of Hargrove in the #58 Porsche with Toni Vilander a further four and a half seconds back in the #61 Ferrari.

After the drivers had cycled through, Alvaro Parente, now behind the wheel of the #9 Bentley, held on to the overall lead with Patrick Long in the #58 Porsche over six seconds behind.

The Pro-Am battle was the closest on-track contest as the race entered the final 40 minutes with Matt Campbell in the #91 Porsche just under half a second behind Marc Miller in the #5 Acura. Dane Cameron was pushing hard for second in class and, after 32 laps was just .169 seconds behind Campbell in the #91 car. 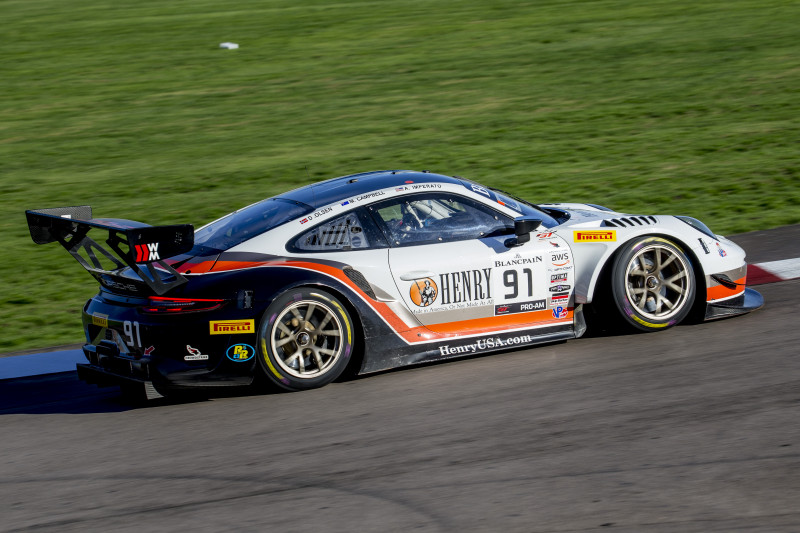 By the 37th lap, Campbell was under the rear bumper of Miller but the #5 Acura had the legs on the #91 Porsche and the Australian driver struggled to find a way past. However contact between Campbell and Miller on Lap 38 resulted in the #91 and #43 cars passing, relegating the #5 Acura to third in the Pro-Am class. Campbell held on to the class lead until the chequered flag.

With less than 90 seconds remaining, Patrick Long suffered a failure in the #58 car and limped the stricken Porsche back to the pits with smoke pouring from the rear.

At the chequered flag, Alvaro Parente in the #9 Bentley took the win ahead of Miguel Molina in the #61 Ferrari, Maxime Soulet securing the final overall podium position in the #3 Bentley.

Andy Soucek was aware of how Scott Hargrove might attack on the opening lap.

“Scott got on the power at the same time and I knew he is very aggressive,” said Soucek. “The Porsche, when the tyres are not up to temperature, has a bit more grip than us so I knew he was going to out-brake me on the first corner but I kept on the inside and I saw he ran wide – completely off-track.

“I knew he was going to come back so I gave him the space and Toni (Vilander) used that opportunity (to pass) but to be honest I just wanted to play it safe. I then made a move on Toni in Turn Two and I knew that Scott was going to have to give me the place back.”

“It’s a special track and the first time we’re here,” said overall race winner Alvaro Parente. “It’s a little bit different than usual but it felt great. We did the perfect job – so far – but we have one more race to go.

“Even (the quick turn-around to Race Two) is different but I think we have the plan well sorted so I think we’ll have a bit of a rest!”

A further six squads have announced their intentions to contest the GT Cup, part of the inaugural FIA Motorsport Games at Vallelunga. This brings the total currently confirmed to 11. Salih Yoluç and Ayhancan Güven, winners of the 2018 FIA GT Nations Cup, will join forces with TF Sport to represent Team Turkey. Team France will be […]

The final round of the 2021 Asian Le Mans Series saw Kent-Based JOTA take back-to-back wins as the #28 ORECA piloted by Sean Gelael and Tom Blomqvist took the chequered flag lass than half a second ahead of the #25 G-Drive Racing Aurus 01 crewed by John Falb, Franco Colapinto and Rui Pinto de Andrade. […]