Patrick Long clinched the Overall GT Drivers Championship and Michael Cooper won twice at Sonoma Raceway on September 16 – 17 as the 2017 Pirelli World Challenge drew to a close for the GT classes.

Cooper, driving the #8 Cadillac Racing Cadillac ATS.V-R took the lead shortly after the start in Race One when pole-sitter Daniel Mancinelli in the #31 TR3 Racing Ferrari F488 GT3 had to back out of the throttle to avoid a potential jump-start penalty. Cooper held on the lead with Alvaro Patent, piloting the #9 K-PAX Racing McLaren 650S GT3, finishing second and Michael Cooper taking the final podium position.

Following Johnny O’Connell’s off during FP2, the Cadillac Racing crew had worked through the night to repair the #3 Cadillax ATS-V.R and Cooper was quick to dedicate his victory to the team.

“It was an incredible race win today,” said Cooper. “The Cadillac guys were here till 2.00am last night finishing the #3 car and just to reward them with something like this is awesome and makes me so happy.”

Cooper was pleased that his concentration on the start had paid dividends.

“I asked the question in the drivers meeting about the start procedure because I know guys who have been messing with it a little and getting penalties for it,” said Cooper. “Then Daniel went a little early and had to get out of the gas and I kept going because he had gone and I’m like ‘I’m not going to let everyone drive away from me’.”

“From there he put some pressure on me early on but I was able to conserve tyres – the traction management in this Cadillac is unreal. It allowed me to keep the tyres under me and that’s why we still had the pace all fifty minutes.”

Patrick Long, driving the #58 Wright Motorsports Porsche 911 GT3 R was pleased to have secured the drivers title but had been frustrated by a fellow competitor’s tactics. 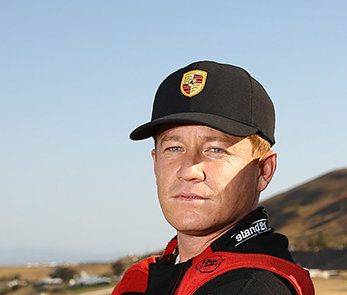 “He (Alvaro Parente) was wearing out my rear bumper and after last year I hate points-racing but there’s not a lot of trust with a few of my rivals out there,” said Long. “In the end it was the right move. I still had a lot of pressure from behind from Pierre (Kaffer) but the car was good today.”

“The Porsche GT3 R is the car to have on tracks like this where it’s technical and twisty – short wheel-base, lightweight and agile. Thank you to Wright Motorsports. These guys worked their tails off. We had to wait an extra year and it feels that much sweeter.”

Race Two saw Cooper and Long battling once again for the lead with the newly-crowned Overall GT Drivers Champion finishing less than a second behind Cooper.

The race got off to an unfortunate start after Daniel Mancinelli, driving the #31 TR3 Racing Ferrari F488 GT3, made contact with Alvaro Parente in the # 9 K-Pax Racing McLaren 650S GT3. The resulting damage and recovery brought out the Safety Car and caused the retirement of Parente. Mancinelli in the #31 car received a two-minute stop-gap penalty for causing the accident and went on to finish fifteenth overall.

Following his second victory of the weekend Cooper reflected on his progress as a professional driver.

“Most kids start out in karts or cars when they’re very young and I didn’t do that,” continued Cooper. “I started when I was 20, and I’m 28 now so it hasn’t been that long. But winning three championships in a short amount of time, and that I’ve done it – getting rides on merit and not any other way…. Also, Patrick Long mentioned the CVs of the factory drivers in this category and you look at my resume against those guys and it’s pretty easy to read so that makes me very proud that I can compete with guys like that and hold them off for the win.”

Following the final round for the GT classes in 2017, Pirelli World Challenge announced the calendar for the 2018 championship with the season-opener at St. Petersburg on March 9 – 11 next year.

Photo: World-Challenge.com SRO Motorsports Group, the global leader in the organisation of GT racing, and Pirelli World Challenge have presented the format and a programme outline for the 2019 season of the highest-profile GT production-based road racing series in North America. Stéphane Ratel, Founder and CEO of SRO Motorsports Group, and Greg Gill, President and […]

Photo: world-challenge.com Young Canadian driver Scott Hargrove, driving the #96 Pfaff Motorsports Porsche 911 GT3 R, won on his debut in the GT class of the 2018 Pirelli World Challenge, crossing the line 3.918 seconds ahead of Toni Vilander in the R. Ferri Motorsport Ferrari 488 GT3. Taking the final podium position in the class […]