The 2017 Michelin Le Mans Cup reaches its final round at the Algarve International Circuit at Portimão, Portugal on Sunday October 22.

19 entries will take to the grid for the seventh round of the championship, now in its second year.

14 cars are entered in the LMp3 category. Missing from the provisional entry list from those entered for the previous round at Spa-Francorchamps is the #33 Ibran Pardo Javier Ligier JS P3 piloted by Javier Ibran and Mathijs Bakker. Also missing is #40 GRAFF Ligier which was driven to 14th place at Spa by Richard Bradley and William Lok.

Joining the grid on the Algarve will be the #39 GRAFF Ligier with the driver line-up of Eric Trouillet and Scott Andrews. Also joining the LMP3 class will be #44 SPV Motorsport Ligier, with the driving duties being shared by Alvaro Fontes and an, as yet unnamed, second driver.

Other changes in the prototype field include the replacement at Duqueine Engineering of Kenton Koch in its #9 Ligier. Jonatan Jorge will be sharing the driving duties with Joël Janco.

The GT3 grid has six entries for the final round. Kessel Racing has entered its #93 Ferrari F488 GT3 to be driven by the all-Italian driver line-up of Claudio Schiavoni and Andrea Piccini.

With only 25 points available at Portimão, the top three positions in the LMP3 teams standings are almost certainly decided.

DKR Engineering heads the table on 113 points with its #3 Norma M30, the only non-Ligier JS P3 chassis in the field, and its driver line-up of Jean Glorieux and Alexander Toril.

DKR Engineering, owned by Kendy Janclaes and based in Luxembourg, has enjoyed a dominating year in the prototype class. With wins at La Sarthe, the Red Bull Ring, Le Castellet and Spa-Francorchamps and a second-place finish at the season-opener at Monza, the team has only had a single poor result this season – a non-finish in the first ‘Road to Le Mans’ race.

33 points behind DKR Engineering sits Corby, UK-based Nielsen Racing on 80 points. The team has enjoyed an excellent season with a win at the opening round at Monza and second places, albeit behind its closest rival DKR Engineering, at the Red Bull Ring, Le Castellet and Spa-Francorchamps. A poor showing at the two ‘Road to Le Mans’ races at La Sarthe has spoiled an otherwise highly consistent run in the championship.

Third in the LMP3 teams standing is the #65 GRAFF, piloted by Emilien Carde abd Adrien Chila. Being 25.5 points behind second-placed Nielsen Racing means that the first three places in the prototype teams championship are almost certainly decided.

The GT3 championship is, however, far closer. Ebimotors and its #46 Lamborghini Huracán GT3 driven by Emanuele Busnelli and Fabio Babini sits at the top of the teams standings, just seven points ahead of Lee Mowle and his #7 Mercedes AMG GT3 that he will be sharing with Phil Keen at Portimão. 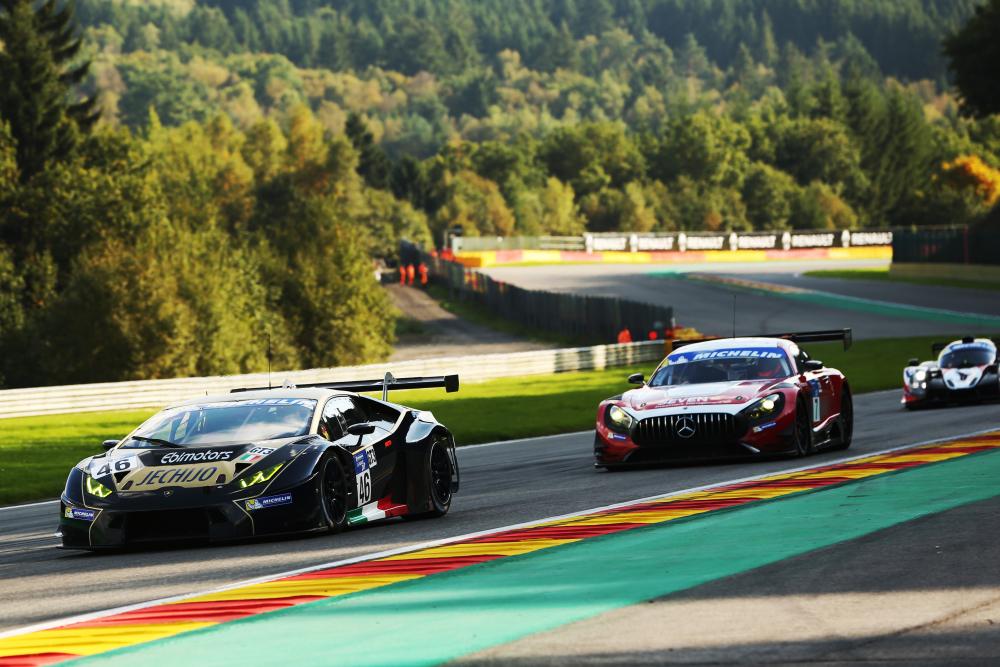 The Italian team from Cermenate has enjoyed wins at the Red Bull Ring and Le Castellet with podium position finishes at Monza, Le Sarthe and Spa-Francorchamps. Lee Mowle has also had two victories, at Monza and Spa as well as a second-place finish at Le Castellet A disappointing 13th-place finish in the first ‘Road to Le Mans’ race at La Sarthe has cost the team dearly in the fight for the championship.

Track action for the Michelin Le Mans Cup field begins on Friday October 20 with FP1 at 15:00 local time. Qualifying takes place on Saturday October 21 at 15:40 local time with the lights going out for two-hour race on Sunday October 22 at 09:00.

Redhill, Surrey-based TF Sport won the inaugural round of the Michelin GT3 Le Mans Cup, a six-round championship which runs alongside the European Le mans Series. The #34 Aston Martin V12 Vantage, with Salih Yoluc from Turkey taking the lead-off driving stint, lead from the first corner after an incident between the #88 Mentos Racing […]