It was another glorious day, weather-wise, in Le Mans on Monday June 12. Although fairly cool overnight, the day opened warm and bright and only brief period of colder winds mid-morning interrupted a day that got hotter and hotter.

We (EnduranceandGT.co.uk photographer Roger Jenkins and editor Andy Lloyd) made our way into town to catch up with the morning’s scrutineering activity. Although it may sound fairly mundane, the accompanying interviews with drivers offers the chance to hear some interesting opinions and views before all the teams have got, frankly, bored with talking about racing and just want to get on with it. We listened to the drivers from CEFC Manor TRS Team China drivers, Spirit of Race and Clearwater Racing and the interviews with the Clearwater Racing crews were particularly fascinating. You can read the full report here.

Roberto Gonzalez, sharing the driving duties in the #25 CEFC Manor TRS Team China ORECA 07 along with Simon Trummer and Vitaly Petrov was clearly very much looking forward to the race.

“During the test, it went well – very smooth,” said Gonzalez. “We were able to complete as many laps as we had scheduled and the pace was quite good. We were working on basically race pace so I really felt comfortable. Obviously my team mates have a lot of experience on this track. They both offered me the correct tips on how to approach each corner which was very helpful.”

“On this track you really need as much help as you can get,” continued Gonzalez. “I’m really looking forward to this week.”

We also bumped into the ‘Virage de Mulsanne’ committee who will be organising the event at Mulsanne Corner on Friday June 16. As we will be doing some work with them at the event, we stopped for a chat and arranged to meet up later in the week.

Having spent the morning in the Place de la République we decided to return to the Montbizot Data Centre (i.e: our camp-site) to work on notes and images for the later posting. 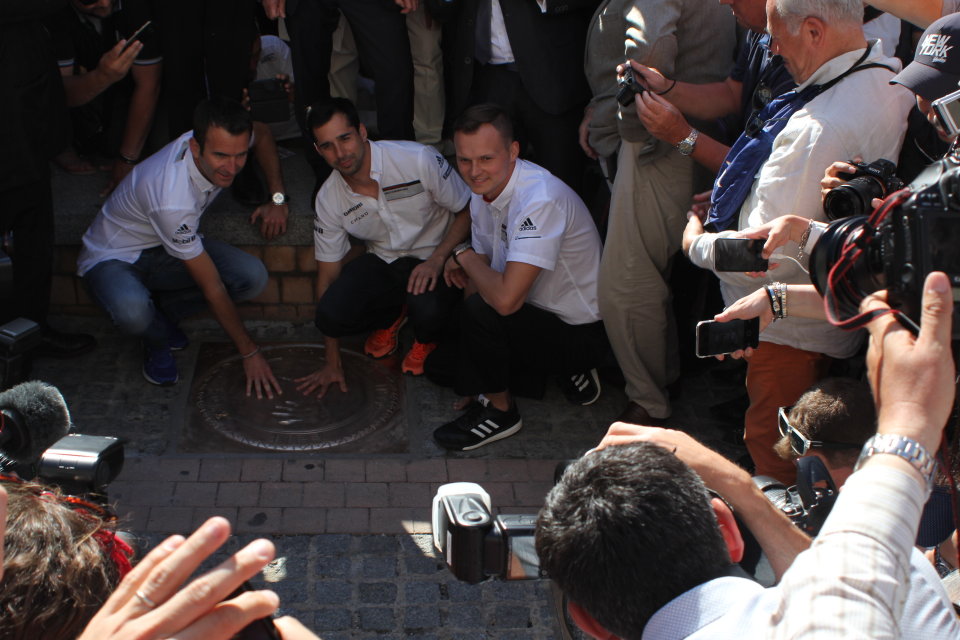 Next on the itinerary was the ‘Drivers Handprints’ ceremony in the centre of the town at 6.00pm. For those of you not familiar with the many traditions surrounding the Great Race, every year the winning drivers have their handprints cast in a bronze plaque which is cemented into a square in the city centre, along with the plaques of other past winners, during race week the following year. Following the dramatic win of Porsche at Le Mans in 2016, it was the turn of the winning driver trio of Neel Jani, Marc Lieb and Romain Dumas to visit the winners circle.

The ceremony, such as it was, was brief but offered great photo opportunities for pictures with the drivers with only a few spectators present.

EnduranceandGT.co.uk editor Andy Lloyd had a few words with Romain Dumas, this year driving for Signatech Alpine Matmut alongside Gustavo Menezes and Mathhew Rao in the #36 Alpine A470.

“We have a strong car and we are ready so I think we will go well,” said Dumas. “There has been a lot of talk about the speeds of the LMP2 cars this year but it won’t affect our strategy. We will run our own race and stick to our own plan.”

We discussed the weather forecast which looks considerably better than it did in 2016.

“It looks as if it will be hotter than last year for sure,” continued Dumas. “We will be prepared for it and I think we will have a strong race.” 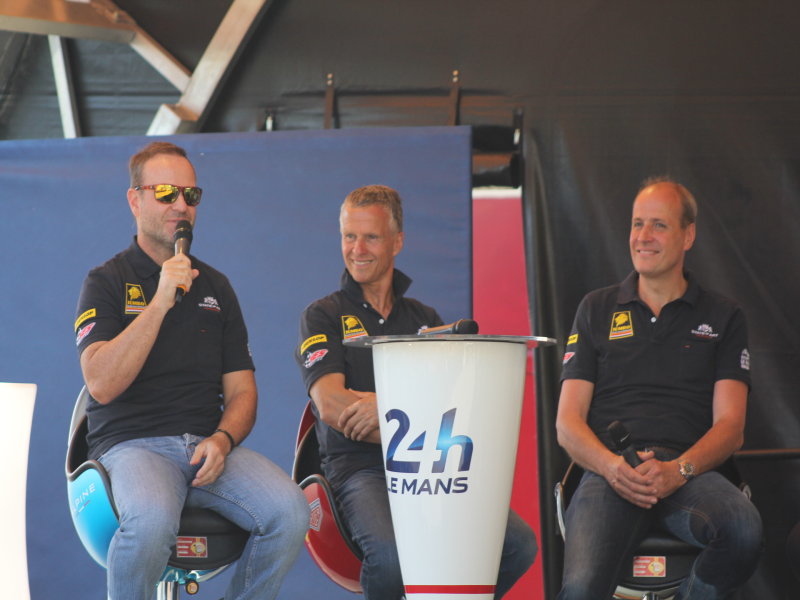 Final stop of the day was a return to Scrutineering where ex-Ferrari pilot Rubens Barrichello was talking about his first experiences of the 24 Hours of Le Mans. Barrichello will be driving alongside Jan Lammers and Frits Van Eerd in the Racing Team Nederland Dallara P217. Lammers was keen to play down any expectations that may have arisen with Barrichello having joined the team. As far as Racing Team Nederland is concerned, getting to the finish will be a worthwhile result.

The programme for tomorrow (Tuesday June 13) includes visiting the circuit for the first time this year to observe the drivers photograph and then staying in the pit-lane which we presume will be open all day in readiness for the autograph sessions later in the evening.

We’re also hoping to arrange some interviews for tomorrow as well so, all being well, a busy and productive day in prospect.

Photo: Roger Jenkins. Ate de Jong,  member of the driver line-up of the #25 Algarve Pro Racing Ligier JSP217 with teammates Mark Patterson and Taksung Kim, is feeling relaxed and confident as the countdown to the start of the 2018 running of the 25 Hours of Le Mans continues. For De Jong, who started his […]

Photos: Roger Jenkins As the 2019 24 Hours of Le Mans hit the nine-hour mark at 24:00 local time, it was the #7 Toyota Gazoo Racing Toyota TS050 Hybrid who led the field, Mike Conway at the wheel in the car he shares with Kamui Kobayashi and Jose Maria Lopez. Second overall was the sister […]