The day dawned clear and bright after a comfortable night where the temperatures dropped to cool at worst. Much sleep had been had.

After a leisurely coffee and sort-out, we decided to head for the circuit as there was to be the official Drivers Photograph session and, later in the afternoon, the Drivers Autograph session in the pit-lane.

However, as we approached the circuit at Tetre Rouge, we decided to do at least one lap of the publicly-accessible parts of the 24 Hour circuit as this was probably going to be first and last appearance of the EnduranceandGT editor’s Porsche Boxster at Le Circuit de la Sarthe and we wanted to make it memorable.

Thus we set off down the Mulsanne Straight, missing out the two chicanes and turned right at Mulsanne Corner, heading down towards Indianpolis and Arnage and then back to the front gates of the circuit, passing the entrance to the Porsche Curves.

Without boring everybody with the story, we decided to do some filming of said editor and car passing the gentle right-hander down towards Indianapolis. A lot of fun was had by all and some superb, and highly memorable, images were taken by EnduranceandGT photographer Roger Jenkins. Thanks, Roger!

Photos taken, we headed back to our parking space of choice in the lead-up to the race in the Rue Des Expositions.

We then strolled won to the circuit where, understandably, security was a lot tighter to gain entry than it had been in previous years. We then walked down to the paddock area and made for the Jackie Chan DC Racing / Jota Sport garage to say hi to our old mate, Bob Friend – Sporting Director at Jota Sport. It was great to see Bob and to talk about the scale of the Jota operation in comparison to when we first worked for the team in 2013. 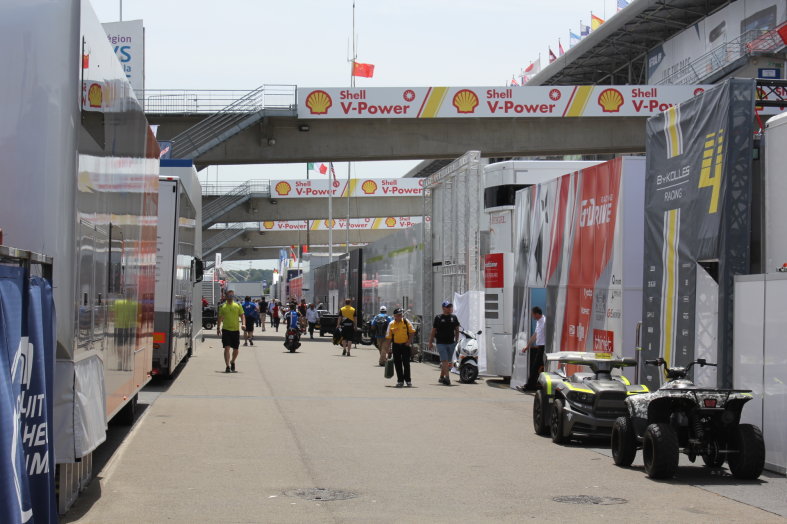 Walking up the paddock we saw Rubens Barrichello, this year with Racing Team Nederland, Romain Dumas and all the Porsche drivers as they walked back from lunch.

Passing Will Stevens, who we had previously met when he drove for G-Drive Racing last year, we stopped for a quick chat about his career decision to pursue GT drives and his thoughts on JMW Motorsport’s new Ferrari F88 GTE. He was very generous with his time and you can read the full article here.

After a quick bite to eat, we headed back to the pit-lane to finish the day with the Drivers Autograph session. The evening was warm and still and the atmosphere was everything that is good about Le Mans – happy, smiling, friendly and open with the drivers chatting to the public and signing posters and cards. However you do get the impression that teams and drivers have had enough of sitting around and just want to get on with it!

All in all, an excellent day. Tomorrow is a prep day for all the teams so hopefully it will offer some good interview opportunities.

All Photos: Roger Jenkins. The EnduranceandGT team of editor Andy Lloyd and photographer Roger Jenkins arrived at Circuit de la Sarthe in the early hours of Tuesday June 11 following a trouble-free run down from Calais overnight. The torrential downpours that blighted the packing day on Monday in the UK seemed to have abated as […]