“We always knew that the Bentley is not the greatest car in the wet. It’s because of the weight distribution.,” said Parfitt Jnr. “It’s 70 – 30 so we have virtually no weight over the rear wheels. In the dry we can get away with it but it’s still highlighted at circuits where it’s stop-start like Snetterton and Donington but here, at Rockingham, it’s OK-ish in the dry but in the wet our time is a long way off.”

“Ryan (Ratcliffe) is still learning the car and I’ve refused to go out because at the moment we’re just not competitive. It’s a real shame but the Bentley is just not the car to have in the wet.” 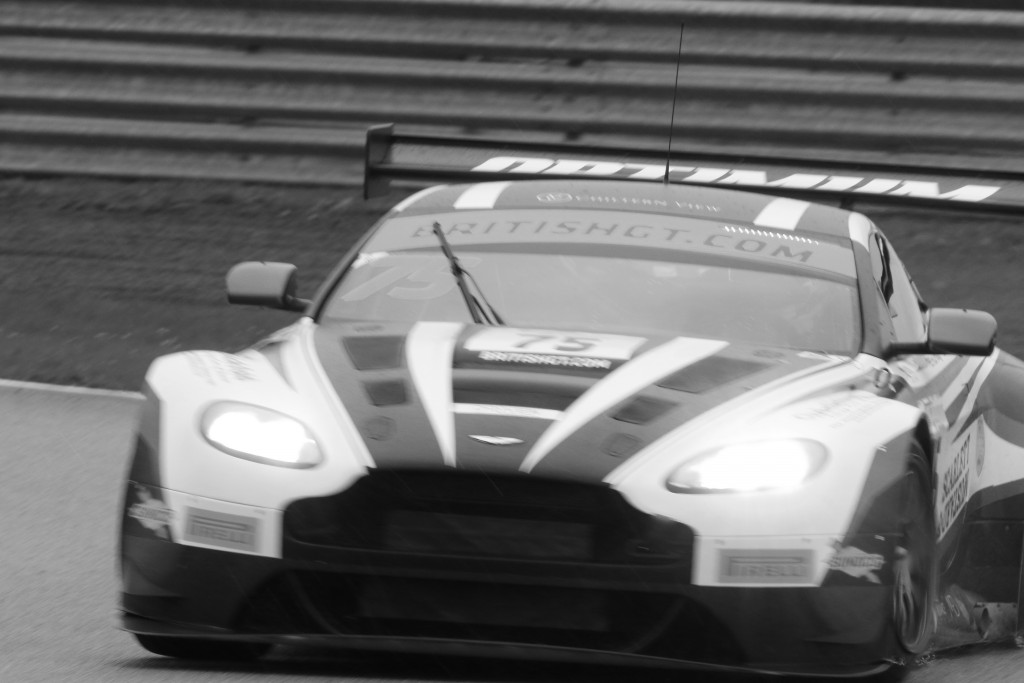 After taking victory in Race One at Oulton Park over the Easter Weekend, Race Two did not go according to plan for the #75 Optiumum Motorsport Aston Martin V12 Vantage, driven by Flick Haigh and Jonny Adam, after Adam incurred damage in the extremely wet conditions at the start.

“It had damage to the rear upright so that had to be replaced so we were probably in for a good fifteen minutes,” explained Flick Haigh

“I was really pleased with the result (in race one),” continued Haigh. “We got lucky as Phil Keen in the #33 Lambo was gaining but they ended up with a puncture which gave Jonny a free run to the end. It was just a shame about race two.”

Mark Farmer, partnered with Nicki Thiim in the #11 TF Sport Aston Martin V12 Vantage, is impressed with his new team-mate but explained that the break with Jon Barnes was not easy.

“Considering his lack of circuit knowledge, he’s pretty impressive,” said Farmer as Thiim continued to improve his lap-times at the Corby circuit.

“I love Jon Barnes to bits. We had a really lengthy and solid partnership and a long time together. Breaking with him was like breaking with a girl-friend – it was really, really tough. But Nicki’s great. He’s world-class and I’m learning quite a bit from him. You just want to get everything around you the best you possibly can and then you know it’s all down to you and that’s where I am at the moment.”

Photo: BritishGT.com Bruntingthorpe-based Jetstream Motorsport has announced that it is to enter the 2018 British GT Championship with an Aston Martin V12 Vantage, to be driven by Graham Davidson and Maxime Martin. Both Graham Davidson and Maxime Martin are experienced competitors with Davidson having won the 2017 GT Cup Championship with Jetstream Motorsport, driving its […]

Photo: BritishGT.com / Jakob Ebrey Photography Following a difficult race for many on Sunday July 22 at Circuit de Spa-Francorchamps for Round Seven of the 2018 British GT Championship, more details are emerging around some of the incidents which marred an otherwise gripping contest. TF Sport’s Mark Farmer, at the wheel of the #11 Aston […]