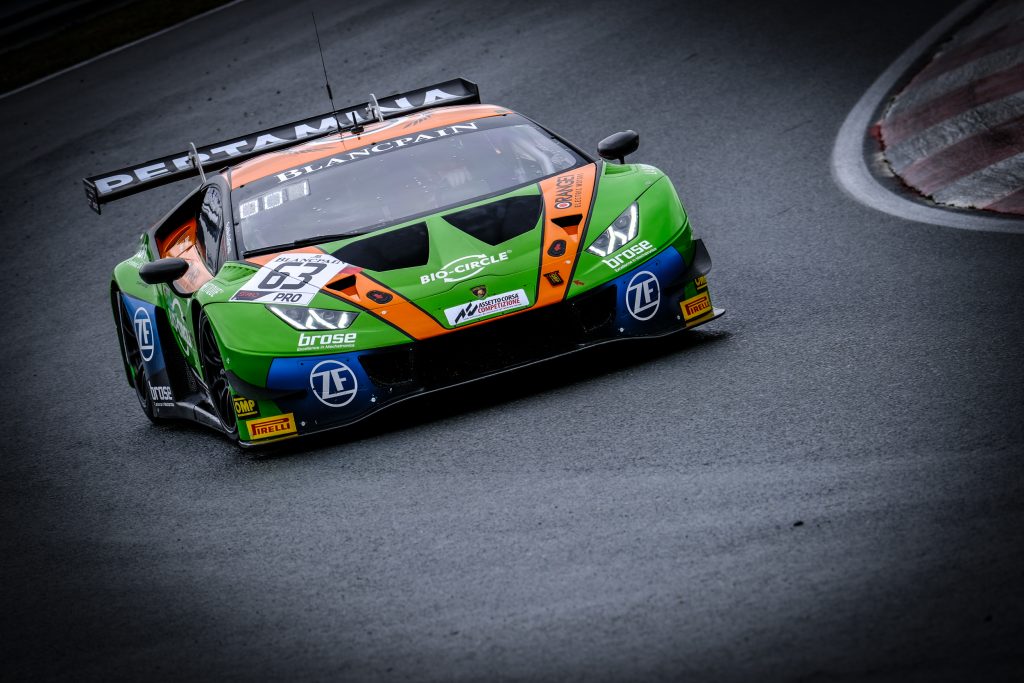 There was disappointment at the start for the #26 Sainteloc Racing Audi R8 LMS GT3 when the car, with Markus Winkelhock at the wheel, stopped out on the circuit during the first formation lap, forcing the race director to call for the grid to circulate a second time before the race could go green.

The #63 GRT Grasser Racing Team Lamborghini Huracán GT3, started for Race Two by Christian Engelhart from fifth on the grid, was racing under appeal following an issue with the car’s data logger earlier in the weekend. As a result, the result from Race Two will be provisional until a decision is reached next week.

When the lights finally went out, some cars had already started to make moves on the cars ahead of them, meaning that some entries were investigated for jump-starts. The #19 GRT Grasser racing Team Lamborghini, driven by Michele Beretta, was awarded a drive-through penalty as a result.

Christopher Haase, at the wheel of the #25 Sainteloc Racing Audi, led the field away from pole position and was soon starting to pull a gap to Dries Vanthoor in the #1 Belgian Audi Club Team WRT Audi R8 LMS and was over six seconds ahead after eight laps.

All eyes were on Marco Mapelli in the #563 Orange 1 FFF Racing Lamborghini which was starting from fourteenth on the grid following a frustrating second qualifying session. After four laps Mapelli was on the back of Marvin Kirchhöfer in the #76 R-Motorsport Aston Martin Vantage AMR.

As the driver-change window approached, Haase was running confidently in the lead with a gap of over ten seconds to Vanthoor in the #1 Audi. BLACK FALCON’s Maro Engel, at the wheel of the #4 Mercedes-AMG GT3, was less than half a second behind Vanthoor.

Vanthoor and Engel pitted together after fourteen laps, leaving Haase to extend his advantage at the front. Haase, in the leading #25 car, stayed out for a further three laps before coming in for his driver-change.

After the pit-stops had cycled through, the #25 Sainteloc Racing Audi, now driven by Simon Gachet, held on to the lead with Mirko Bortolotti in the #63 GRT Grasser Racing Team Lamborghini in second, just under ten seconds behind. Ezequiel Perez Companc in the #1 Audi was third.

Andrea Caldarelli, driving the #563 Lamborghini, was pushing hard in seventh but was warned for ignoring track limits in his frustration to climb the leader board. The Italian Team Principal was not content to stay in seventh, however, and was all over the back of sixth-placed Vincent Abril in the #88 AKKA ASP Team Mercedes with ten minutes to go.

Stolz in the #4 Mercedes had not given up on taking the final podium position and was putting Perez Companc in the #1 Audi under considerable pressure as the race entered its final laps. However the top positions did not change as the chequered flag approached and Gachet crossed the line to win by 9.912 seconds from Bortolotti in the #63 Lamborghini.

A visibly tired Simon Gachet was quick to thank his team and teammate for the win in the dunes.

“It was a hard race but Mr Haase did a fantastic job all weekend so thank you Sainteloc, thank you Mr Haase and thank you to all the team.”

Christopher Haase was delighted to find he had both the speed and the balance in the #25 Audi that enable him to build up a gap in the opening half of the race.

“I was a little bit surprised (to pull away at the start) but I had such a good balance in my Sainteloc Audi and such a good speed so for me it was to keep the rhythm,” said Haase. “For sure today I call it a perfect race.”

Stolz and Engel’s fourth-place finish in the #4 Mercedes means that the German driver pairing increase their lead over Orange 1 FFF Racing’s Caldarelli and Mapelli to 8.5 points.

The 2019 Blancpain GT Series in now looking forward to its blue riband event, the Total 24 Hours of Spa in two weeks time.

Can Caldarelli and Mapelli Extend Series Lead In the Dutch Dunes? The 2019 Blancpain GT Series returns to Circuit Zandvoort, Netherlands for Round Six and the third weekend of the Blancpain GT World Europe, a series that has produced some sparkling competition since the season opened at Brands Hatch in May. Currently leading the overall […]