Team Parker Racing’s #7 Bentley Continental GT3, piloted by Ian Loggie and Callum Macleod, took the victory in the second race of the weekend’s double-header at Circuit de Spa-Francorchamps for rounds seven and eight of the 2017 British GT Championships.

Second across the line in the GT3 class was the TEAM WRT #17 Audi R8 LMs driven by Alain Ferté and Stuart Leonard. Taking the final podium spot was the #24 Macmillan AMR Aston Martin Vantage GT3 with the driver line-up of Jack Mitchell and James Littlejohn.

The GT4 class again saw a dramatic victory for the #60 Ebor GT Maserati GT MC GT4 driven by Matthew Graham and, taking the car to the chequered flag, Charlie Fagg. The victory rounded off a highly successful for the return of the York-based team after a mechanical issue side-lined the #60 car for qualifying, resulting in two back-of-the grid starts. 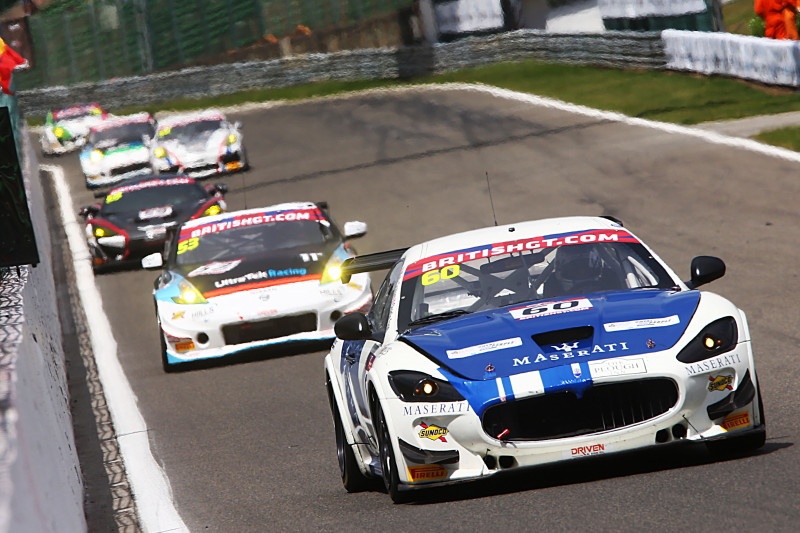 The #33 Barwell Motorsport Huracán, with Phil Keen at the wheel, lead the GT3 field from pole position and retained the lead through the driver changes. However the #7 Team Parker Racing entry, now with Ian Loggie at the wheel, pushed hard to close the gap and benefited when Minshaw in the #33 car spun avoiding a GT4 car.

Ian Loggie was delighted at the win.

“This win has been a long time coming,” said Loggie. “There were a lot of mistakes at the start of the year but we’ve really got on top of the car and Team Parker have done a phenomenal job – I feel like I can push it to the absolute limit now, which was proven by posting quicker lap times around here than I’ve ever done before. I know Jon (Minshaw) spun but I felt like it was only a matter of time before I passed him. The gap was coming down lap after lap. From there I backed off a bit too much, which allowed the Audi to close in. But everything was under control!”

In the GT4 class Matthew Graham, behind the wheel of the #60 Ebor GT Maserati GT MC GT4 carved through the field to lead the class by the end of his stint. Charlie Fagg emerged from the driver change in eighth place due to success penalties for winning the first race and the silver driver pairing but the pace of the Maserati was too much for the GT4 class and he took the class lead with seven minutes remaining.

Despite not winning the points on offer due to being a race-by race entry. Matthew Graham was very happy with the weekend’s results.

“It’s been pretty amazing, to be honest,” said Graham. “We were really gutted after the problems in qualifying prevented us from setting a time after topping both practice sessions. We didn’t expect to win the first race, and definitely not the second with the extra pitstop success time, but I got my head down and enjoyed the battle, which is exactly what it was. I feel like Charlie [Fagg], the team and I have all done a really good job this weekend. I’m also over the moon to have won the Sunoco Fastest Lap Award.”

Round Nine of the 2017 British GT Championship takes place at Brands Hatch on August 5 – 6.

Photo: Multimatic The British GT Championship will see a pair of Ford Mustang GT4s on the grid for 2019 after Multimatic Motorsports announced that it will enter the premier national GT championship. The announcement follows a highly successful season for the Mustang GT4 in the IMSA Continental Tire SportsCar Challenge in North America with Ford […]

Photo: BritishGT.com Derek Johnston who, with TF Sport and teammate Jonny Adam, won the 2016 British GT Championship GT3 Drivers Championship title, is to retire after the final round of the season at Donington Park. Johnston has admitted that a little of the driving motivation that saw him take the premier GT championship title two […]