Johnston set the third fastest time in the first session with a 1:17.808, behind Mark Farmer in the sister #11 car and the #24 Macmillan AMR Aston Martin Vantage GT3 driven by Jack Mitchell. Adam then set the second-fastest time of Q2 with a 1:16.542 to put the 2016 champions on pole.

Qualifying started with the sad news that the #29 2Racing McLaren 570S GT4 would be taking no further part in the weekend’s activities as it had sustained more damage than first thought after its impact with the barrier coming out of the hairpin with Marcus Hoggarth at the wheel.

Second on the grid in the GT3 class was the #11 sister car driven by Mark Farmer and Jon Barnes. Farmer put in a 1:17.704 in Q1 after which Jin Barnes broke into the 1:16s with a 1:16.891 to take second place on the grid by more than half a second on aggregate time from the #33 Barwell Motorsport Lamborghini Huracán GT3 piloted by Jon Minshaw and Phil Keen.

Ginettas locked-out the first three positions on the grid in the GT4 class, putting to bed the concern that the mature design would struggle to compete against the contemporary McLaren 570S GT4s.

Pole position in the category was earned by the #55 HHC Motorsport Ginetta G55 GT4 driven by the young driver pairing of William Tregurtha and Stuart Middleton. Both Silver drivers, it was Stuart Middleton, who drove the first stint and set the quickest time of the pair, who set a 1:22.580. Tregurtha then went out and set a 1:22.885 to put the Roecliffe-based team on class pole for Sunday’s two-hour race. 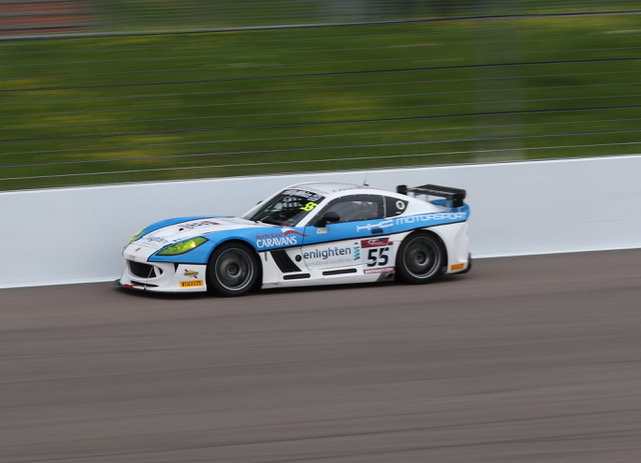 Second in class was the #51 Lanan Racing entry with the driver pairing of Alex Reed and David Pittard. Pittard was second quickest in Q3 with a 1:22.605 after which Alex Reed set a 1:22.605.

Completing the Ginetta qualifying 1-2-3 were 2016 class champions Graham Johnson and Mike Robinson in the #501 PMW Expo Racing / Optimum Motorsport entry with an aggregated time of 2:46.031.

Adam Carroll and Liam Griffin won Round Three of the 2016 British GT Championship in the #6 Barwell Motorsport Lamborghini Huracán GT3. Second was the #7 AMDTuning.com BMW Z4 GT3 driven by Lee Mowle and Joe Osbourne. Closing rapidly over the final laps of the one-hour race was the #31 Team Parker Racing Bentley Continental […]

The #17 TF Sport Aston Martin V12 Vantage GT3 driven by Derek Johnston and Jonny Adam took the top step of the podium after the team led from pole and drove a controlled race. In second place was the #33 Barwell Motorsport Lamborghini Huracán of Jon Mishaw and Phil Keen. Completing the podium positions was […]

The #31 Team Parker Racing Bentley Continental GT3 won a lights-to-flag victory in Round Four of the 2016 British GT Championship at the hands of Seb Morris and Rick Parfitt Jnr. Second was the #79 Black Bull Ecurie Ecosse McLaren 650S GT3 driven by Alasdair McCaig and Rob Bell. Completing the GT3 podium was the […]