Kazuki Nakajima, driving the #8 Toyota Gazoo Racing TSO050-Hybrid he shares with Sébastien Buemi and Fernando Alonso, took pole position at the Circuit de la Sarthe with 3:15.377 in a Q3 session that was lengthened by 30 minutes and was also interrupted with numerous yellow flags and slow zones.

Joining the #8 on the front row for the 2018 running of the 24 Hours of Le Mans will be the sister #8 entry in which Kamui Kobayashi had already set a 3:17.377 in the first qualifying session on Wednesday evening.

Quickest of the non-hybrids and third on the grid for Saturday’s race was the #1 Rebellion Racing Rebellion R13 in which Bruno Senna lapped in 3:19.449 in the third session.

Kazuki Nakajima was delighted with the result but is focused on the race ahead:

“I am quite happy with the result but, more importantly, the car was good and we did a lot of preparation for the race so we feel ready.”

“We could have maybe matched last year’s lap time but still I think it was a good lap time and a good boost for the team.”

IDEC Sport took pole in the LMP2 category with a 3:24.842 set by Paul Loup Chatin in Q3 in the #48 Gibson-powered ORECA 07 car he shares with Paul Lafargue and Memo Rojas. There was some confusion as the session drew to a close as to who had pole after lap times for the #28 TDS Racing ORECA 07 were disallowed due to an infringement that caught a number of other cars out, namely not reporting to post-qualifying scrutineering.

In the LM GTE Pro category, times set in the Wednesday session were not bettered throughout Thursday. Gianmaria Bruni, therefore, took pole in the class with a 3:47.504 in the #91 Porsche 911 RSR he shares with Richard Leitz and Frederic Makowiecki.

The sister #92 entry will join the front row of the class grid with the 3:49.07 set by Michael Christensen.

Bruni was very happy to have taken pole for Porsche in his first Le Mans for the Stuttgart manufacturer and took advantage of ideal track conditions in Q1 with fresh tyres. 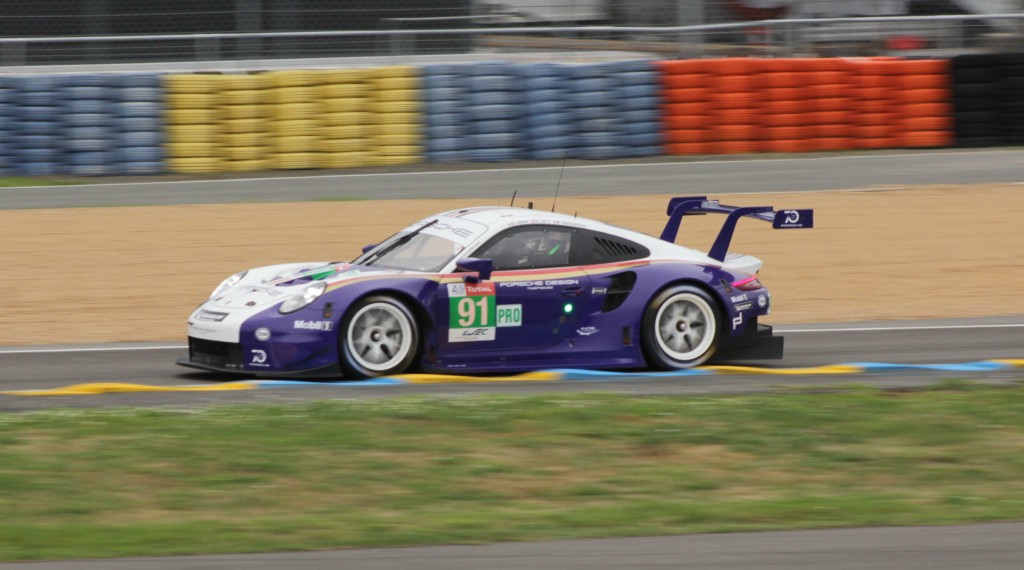 “I know that we have a very good car,” said Bruni. “It was my first set of new tyres at Le Mans because I didn’t put any new tyres on at the pre-test or in free practice before qualy so I felt that the car was very good on the out-lap. So I said ‘It’s now or never’ so I pushed a lot and put everything together. On the second lap I tried to go faster but it didn’t work so it was better yesterday than today or Saturday (for the Test). “

“Le Mans is amazing. I have loved this track since the first attempt here with Risi Competizione. They brought me here in 2008 and straight away we got the GT class win so I have a good feeling about 2008 which I remember like to was yesterday. Now with Porsche it’s a different emotion – I am lucky to have this amazing livery – the Rothmans colours – and it feels good. I am so happy for the guys in Weissach and for all the people that have helped me to reach this. Obviously this is a small thing because it is the 24 Hours of Le Mans but it’s a small brick and in two days we will think about the race.”

Quickest times in the LM GTE Am category were also set on the Wednesday session with Matteo Cairoli’s time of 3:50.728 securing pole for the #88 Dempsey-Proton Racing Porsche 911 RSR.

Above: Romain Dumas talking to EnduranceandGT.co.uk Editor Andy Lloyd (Photo: Roger Jenkins) It was another glorious day, weather-wise, in Le Mans on Monday June 12. Although fairly cool overnight, the day opened warm and bright and only brief period of colder winds mid-morning interrupted a day that got hotter and hotter. We (EnduranceandGT.co.uk photographer Roger […]

Photo: Roger Jenkins Toyota Gazoo racing headed the time sheets with provisional pole position in the LMP1 category after the second of three qualifying sessions for the 2019 24 Hours of Le Mans. The #7 Toyota T050 Hybrid lapped in 3:15.497 while the sister car put in 3:15.908. Third quickest in the first of two […]

After 90 minutes of racing for the 2019 running of the 24 Hours of Le Mans, Toyota Gazoo Racing held the overall lead after a determined stint from Mike Conway put the #7 Toyota TS050 Hybrid over 30 seconds ahead of the sister #8 car with Sébastien Buemi at the wheel. Completing the overall top […]