Singapore-based Clearwater Racing is the back at Le Circuit de la Sarthe for its second year competing in the French classic but this time it’s brought two Ferrari FG488 GTEs.

The #60 entry is being driven by Richard Wee, Hiroki Katoh and Alvaro Parente. The #61 car is to be piloted by Team Principal Weng Sun Mok with driving partners Keita Sawa and Matthew Griffin.

The team finished fourth in the LM GTE Am category in 2016 and  Team Principal and driver Weng Sun Mok has found the draw of Le Mans more than enough to persuade him to suspend his plans to retire as a driver. Instead he is determined to finish in the top three in class and take his place on the podium on Sunday June 18.

“I was thinking about retiring,” said the Hong Kong-based businessman at Scrutineering in Le Mans town centre on Monday June 12. “I made some pledges to my family to try to spend more time with them but the lure of Le Mans was too much. After the race last year I said I have to find a way to come back. I was doing the Asian Le Mans Series and I said ‘Let’s give it a go one more time’ and here we are.” 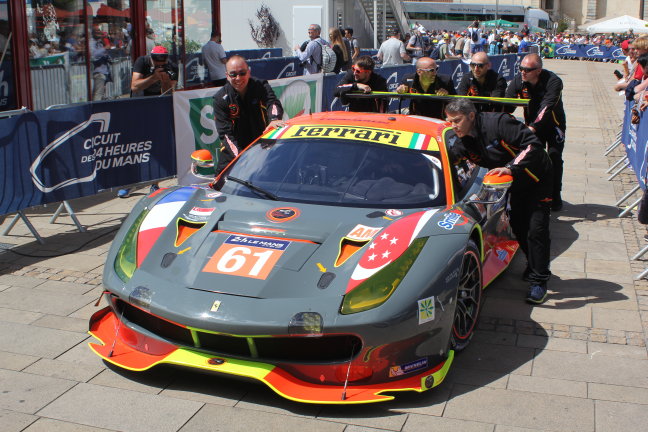 “I really appreciate the A.C.O. for giving us this opportunity, especially with two cars. I was quite apprehensive last year and I didn’t know what to expect. I think this year we come here in a much better frame of mind. We’re really enjoying every single minute of it and I’m happy to postpone that retirement!”

Is the objective of Clearwater Racing at Le Mans to just score points for its FIA World Endurance Championship standings? Weng Sun Mok knows exactly what he wants to achieve.

“I have three challenges” continued Weng Sun Mok. “The first is to beat ‘Rocket’ Richard Wee (driver of the sister #60 Clearwater Racing Ferrari F488 GTE alongside Hiroki Katoh and Alvaro Parente.)! I need to make sure I beat him! Obviously we’re thinking about points for the FIA World Endurance Championship – that’s the most important thing for us but we’re not being to be sitting around. The dream is to standing on that podium at Le Mans so we will be going hard.”

As the global sporting calendar ground to a halt in late March, so the motorsport world woke up to the fact that it had an entertainment alternative ready and waiting and one that had been in the development process for over 20 years – on-line racing. Many series took the opportunity to quickly mobilise a […]