Hello and welcome to the May 3 edition of the EGT Friday Sportscar Round-Up.

K-Pax Racing and its pair of Bentley Continental GT3s were on the pace early in the weekend when Alvaro Parente put the #9 entry he shared with Andy Soucek on pole position for Race One and Soucek replicated Parente’s result by taking pole position for Race Two. The full EGT qualifying report can be read here.

Parente and Soucek took a lights-to-flag victory in the opening race of the weekend, finishing 3.246 seconds ahead of the #24 Alegra Motorsports Porsche 911 GT3 R piloted by Wolf Henzler and Marco Holzer.

In an enthralling race, there was massive frustration for Scott Hargrove who drove the second stint in the #58 Wright Motorsports Porsche 911 GT3 R. With 20 minutes remaining and less than a second behind the eventual winner, Hargrove ran wide at Oak Tree and slid into the tyre barrier. Although the impact seemed relatively gentle, the damage to the #58 car was significant and overnight repairs involved major logistical challenges for the team.

You can read the full EGT race report here.

Race Two saw K-Pax Racing complete a clean sweep of victories at VIR when Rodrigo Baptista, driving the Sonoma, California-based team’s #3 Bentley he shared with Maxime Soulet, took the chequered flag just over 10 seconds ahead of the #58 Wright Motorsports Porsche 911 GT3 R driven, for the second stint, by Patrick Long.

At the conclusion of Rounds Three and Four of the 2019 Blancpain GT World Challenge America, K-Pax Racing’s Rodrigo Baptista and Maxime Soulet and R. Ferri Motorsport’s Miguel Molina and Toni Vilander share a four-way tie at the top of  the overall drivers standings on 62 points, just one ahead of Alvaro Parente and Andy Soucek.

Squadra Corsa’s Caeser Bacarella and Martin Fuentes have a commanding lead in the Am drivers standings with their 100 points nearly double that of One11 Competition’s Christopher Cagnazzi and Brian Kaminskey.

The Blancpain GT World Challenge America grid next assembles at Canadian Tyre Motorsport on May 17 – 19.

Unpredictable weather plagued the third round of the VLN championship at the Nürburgring with the victory going to the #912 Manthey Racing Porsche 911 GT3 R piloted by Richard Lietz and Nick Tandy who just over 67 seconds ahead of the sister #12 entry driven by Otto Klohs and Dennis Olsen.

At the finish, the third Manthey Racing Porsche, the #911 entry driven by Kevin Estre and Michael Christensen, crossed the line in second place but was relegated to fourth due to penalties awarded for over-fuelling.

Rooster Rojo J2Racing took the class win in the SP9 (GT3) Pro-Am category, the team’s #23 Mercedes-AMG Gt3 driven by John Shoffner and Janine Hill from the US and 21-year-old German pilot Fabian Schiller.

Manthey Racing’s Richard Lietz was delighted at the overall win in difficult conditions.

“A fantastic result!” said Lietz. “The last laps, when the track got dry, were really and adventure because my rain tyres were very worn. The beginning of the race was also difficult. There was a lot of water on the track and we had heavy aquaplaning. I went sideways a few times and was quite lucky here and there. Apart from that, our Porsche was perfect today.”

Round Four of the 2019 Veranstaltergemeinschaft Langstreckenpokal Nürburgring (VLN) series takes place on July 13.

Rounds Three and Four of the 2019 Dunlop Endurance Championship Run By Britcar took place on the Silverstone GP circuit over April 27 – 28.

The overall win in the first race of the weekend went to the #84 VR Motorsport Praga R1T driven by Tom Gray and Alastair Boulton, the Praga finishing nearly 47 seconds ahead of the #28 SB Race Engineering Ferrari 488 Challenge piloted by Paul Bailey and Andy Schultz. Bailey and Schultz took the category honours in the Class 2 field.

Finishing second in Class 1 was the MacG Racing Taranis, crewed by Jonny MacGregor and Ben Sharich with the #4 JPR Motorsport Saker RAPX completing the podium positions in class.

Honours in Class 3 went to the #991 Valluga Racing Porsche 991 driven by Adam Hatfield and Adam Knight.

No Class 1 competitors finished the race.

The 2019 Blancpain GT World Challenge Europe series, formally the Blancpain GT Series Sprint Cup, gets underway at Brands Hatch on May 4 – 5 with a bumper 26-car grid heading for the Fawkham, Kent circuit.

Audi will be the most represented marque of the five manufacturers present for the opening two races. 12 examples of Ingolstadt’s R8 LMS GT3 Evos will be on the grid with 2018 Sprint Cup champions Belgian Audi Club team WRT entering four – two each in the Pro and Silver categories.

2018 Sprint Cup overall drivers champion Raffaele Marciello returns with Akka ASP Team in the #88 Mercedes-AMG GT3, partnered for 2019 with Ex-Bentley driver Vincent Abril. Marciello and Abril, along with Endurance Cup teammate Michael Meadows, finished 39th overall at the opening round of the Endurance Cup at Monza so will be looking for a solid points-scoring weekend at the iconic 3.916 kms Brands Hatch GP circuit.

Track action begins with practice at 09:30 local time on Saturday May 4 with the qualifying sessions getting underway at 15:55 later in the afternoon. The lights go out for Race One on Sunday at 12:10.

You can read the full EGT Preview here.

The penultimate round of the FIA World Endurance Championship tales place on April 4 -5 with the 6 Hours of Spa-Francorchamps.

34 entries will take to the grid in the Ardennes with seven entries in the LMP1 class, eight in LMP2, 10 in LMGTE Pro and nine in the LMGTE Am category. 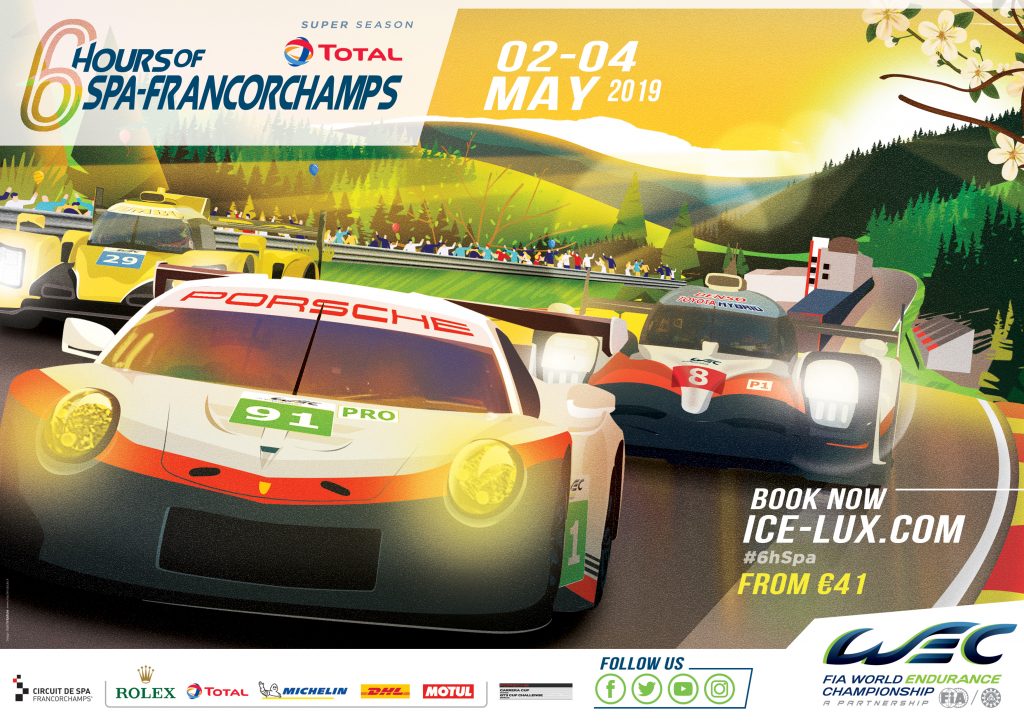 Qualifying for the 6 Hours of Spa-Francorchamps starts at 15:00 local time on Friday May 3 with the race getting underway at 13:30 local time on Saturday May 4.

The full 2019 IMSA WeatherTech SportsCar Championship grid visits the Mid-Ohio Sports Course for the Acura Sports Car Challenge At Mid-Ohio on May 3 – 5.

For sportscar racing fans around the world, it’s going to be a busy weekend!

Wherever you are and whatever your plans are, the EnduranceandGT team wish you a peaceful and fun weekend.