In a new series to EnduranceAndGT.co.uk, Editor Andy Lloyd talks to the next generation of prospective motorsport professionals. He begins this week with a conversation with Norfolk-based data engineer and student Jordan Bird. In 2016, Jordan worked as data engineer with Ebor GT, who contested the British GT Championship with a Maserati GT MC GT4 piloted by Abbie Eaton and Marcus Hoggarth. At the end of its debut season, the York-based team finished 6th in the GT4 Teams Championship with Eaton and Hoggarth finishing second in the GT4 Pro Am standings.

What first interested you pursuing a career in motorsport?

It started when I went to my first race at Brands Hatch in 2007 as a spectator with my father. I enjoyed the sound and the spectacle of motor-racing and I got talking to a few of the drivers and asked them questions about their cars. In 2008/09 I met Duncan Cameron and Matt Griffin, drivers at MTech, and I got on well with them. Then, in 2012/13, when Duncan and Matt drove for AF Corse I followed them and spent time in the pits.

It was being in the garages that gave me the opportunity to see motorsport from ‘behind-the scenes’.  I got talking to some of the engineers, saw what they did and it was then I decided to see if I could pursue this as a career. I asked some of my engineer contacts how I should move forward and their advice was to choose a part of the car and develop some specialist knowledge. I already had an interest in IT and I enjoyed motor racing so I decided to merge the two and focus on data?

That’s an interesting decision because most people looking at motorsport as a career would want to pick up a spanner. But you decided on a different route down the data engineering side.

Yes. My father was a computer programmer and I used to watch him when I was younger. He’s always loved motorsport so he suggested merging the two interests. I then looked at the roles in motorsport that could benefit from my interest in IT. Data engineering was an obvious choice so I decided that that was the route for me.

And do you feel you’ve made the right decision?

Yes definitely. I’ve been lucky enough to shadow data engineers at some of the top teams like Jota Sport so I’ve seen how the role operates at the highest level. Having seen that, I decided I wanted do data because it’s an important role in the team and you can make a real difference.

You’ve been a full-time student as well as working within motorsport for the past two seasons. How have your studies been guided by where you want to take your career?

I’m currently studying motorsport at the College of West Anglia and JP Latham, the founder of Student Motorsport, is my lecturer. We are learning the fundamentals of motorsport and race cars so that we can understand the problems that engineers could be faced with at a circuit. We’re learning as much as we can to understand the component parts of a race car and how to remove, replace and repair them. 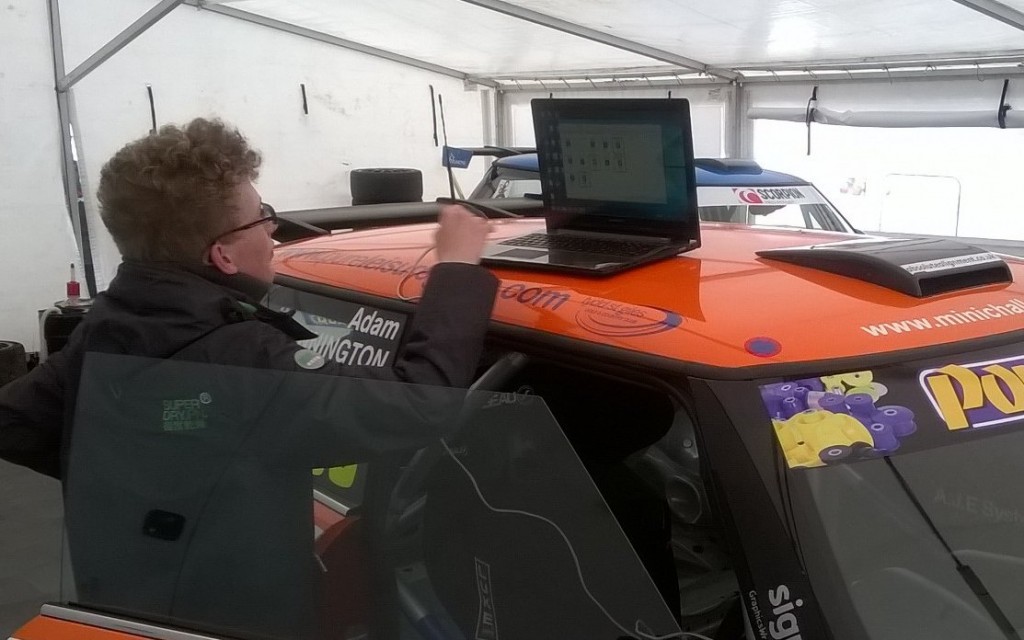 Moving forward, do you see yourself progressing into higher education or moving into a position within a race team?

All the advice I’ve been given suggests that I should go to university as there are few engineers out there who haven’t gone down that route. But I like to do things differently so what I want to try and prove everybody wrong and not go to university and see how I do in a hands-on role.

I’ve had some good hands-on experience so far so my argument is: what are team managers looking for – education or solid experience?

You’ve spoken about hands-on experience. Which teams have you worked for so far?

I started out with Stratton Motorsport who contested the British GT Championship in 2015. They’re a local team to me and they offered me the chance to join them at Silverstone where I shadowed one of their data engineers. I then joined them at Snetterton and Donington Park where I was part of the team. Being with a small team was good because instead of just shadowing I could get involved.

I’ve also worked with the works Radical team with Alex Kapadia and we got some excellent results together.

I also worked with Adam Cunnington in the MINI Challenge. That came about as a result of shadowing the data engineer at ExcelR8 Motorsport, which is a leading team in MINI Challenge and local to me. Adam asked if I could help him in 2016. Sadly he’s had to sell his Mini for this season.

And in 2016 you also worked for Ebor GT in the British GT Championship. How did that opportunity come about?

Stratton didn’t need me for 2016 so, after getting the entry list for the 2016 British GT Championship following the Media Day, I e-mailed and called every GT4 team, explaining that I had one years’ experience and was looking for an opportunity to work as a data engineer. Adrian Snook at Ebor GT offered me the chance to work with the team, who were running a new Maserati GT MC GT4, at the Rockingham round. I worked with the team again at Silverstone, after which Adrian invited me to work with them for the rest of the season.

So you’ve started down the path of a career in motorsport. Do you think you’ll stay within sportscars or will you see where your skills take you?

I really want to stay within sportscars because that’s what I’m passionate about. I like the close racing, the strategy and the fact that it’s difficult for one team to dominate as we see sometimes in Formula One. I also like the fact you have to work within a budget. It was great to see the success that Ebor GT achieved in 2016.

I’ve been delighted to offer as much help and input as I can to Student Motorsport. Before www.studentmotorsport.com there were few places where students could get the help they need to get into the sport we love. You had to do it all yourself as I found out. Student Motorsport provides a very valuable resource.

You’ve said that sportscars are where you want to take your career. If you could pick your ideal job ten years down the line, what would it be?

Ten years down the line I see myself either as first data engineer or as a race engineer, the person who makes the calls on the car. The race engineer does look at data but they do more of the set-up work. I’d like to work at a top factory team – somewhere like Aston Martin Racing.

If you need a data engineer for the 2017 season and are looking for someone with Jordan’s unique experience and work ethic, Jordan can be reached at Jordan.Bird2011@Hotmail.com.

Student Motorsport has announced that it will be contesting the 2020 Clio Cup UK championship with a pair of the latest generation Renault Clio Cup cars. Founded by JP Latham in 2011, Student Motorsport is a network, website, resource and organiser of collaborative projects designed to help young people take the right path to success […]

Photo: Studentmotorsport.com Student Motorsport (www.studentmotorsport.com), the first online motorsport community for young people, students, graduates, educators, institutions, professionals and organisations, has announced that Gemma Hatton, who, until recently, worked as Manor Racing’s Tyre and Strategy Engineer has joined as a contributor. Gemma Hatton graduated from the University of Bath in 2014 with a Batchelor of […]

In our continuing series during which EnduranceandGT editor Andy Lloyd meets with the next generation of motorsport professionals, we spoke with Jamie-Lea Hawley, a 17-year-old Widnes-based driver who has targeted the 2020 Clio Cup UK Championship as the next step in her driving career. Jamie-Lea Hawley began her racing career, as do many young drivers, […]