Toyota Gazoo Racing finished 1 – 2 at the end of a fascinating second round of the FIA World Endurance Championship from Circuit de Spa-Francorchamps.

The #8 Toyota TS050-Hybrid with Sébastien Buemi at the wheel crossed the line less than two seconds ahead of the sister #7 TS050 in which Kamui Kobayashi had driven the stint of his career in an attempt to snatch the lead of the race in the closing laps.

Taking the final step of the podium was the #2 Porsche LMP Team 919 Hybrid in which Brenda Hartley took the final stint. The #2 Porsche 919 Hybrid was leading the race in the closing stages until a last-minute splash-and-dash relegated it to third place.

G-Drive Racing, with its #26 Gibson-powered ORECA 07 driven by Roman Rusinov, Pierre Thiriet and Alex Lynn took the victory in the LMP2 class with the #31 Vaillante Rebellion ORECA, with the driver line-up of Julien Canal, Nicolas Prost and Bruno Senna, finishing in second place.

Pole-sitter André Lotterer in the #1 Porsche 919 Hybrid held the lead from the start but was overtaken by Mike Conway in the #7 Toyota with less than 30 minutes run. The Porsches appeared to have an issue with grip as the #8 Toyota, with Sébastien Buemi at the wheel, moved through into second place. By the end of the first hour the #7 and #8 cars were leading the LMP1 class.

Porsche LMP1 team pushed on in the second hour with Nick Tandy at the wheel of the #1 entry taking second place from the #8 Toyota after a driver change which saw Anthony Davidson swap with Buemi behind the wheel of the #8.

By the end of the third hour the #7 Toyota Gazoo Racing entry, now with Kamui Kobayshi behind the wheel, held a 25-second lead over Anthony Davidson in the #8 entry. Tyre strategies were now becoming critical for Porsche but, as temperatures began to cool, the Porsches seemed to be getting back in to the race. Neel Jani in the #1 Porsche held third place, ahead of the #2 sister car with Timo Bernhard behind the wheel.

It was during the fourth hour that Kazuki Nakajima in the #8 Toyota was able to take the lead after the #7 fell behind during a brief Full Course Yellow. However Mike Conway in the #7 entry was not about to give up and pushed hard to reduce the gap to the leader to just 3.3 seconds at the end of the hour.

As the race drew to a close the #2 Porsche 919 Hybrid, for the final stint driven by Brendon Hartley, tangled with Romain Dumas in the #36 Signatech Alpine Matmut Alpine A470 on the entry into the Bus Stop Chicane. Both cars were damaged, and indeed Hartley was summoned to see the stewards at the end of the race, but it was the #1 Porsche that needed to stop for a new nose, costing the team any chance of competing for the win.

As the race approached the end the #7 car with Kobayashi at the wheel made a final charge and it looked to have the pace to challenge for the lead but traffic gave the winning #8 a slight advantage and the eventual victory. 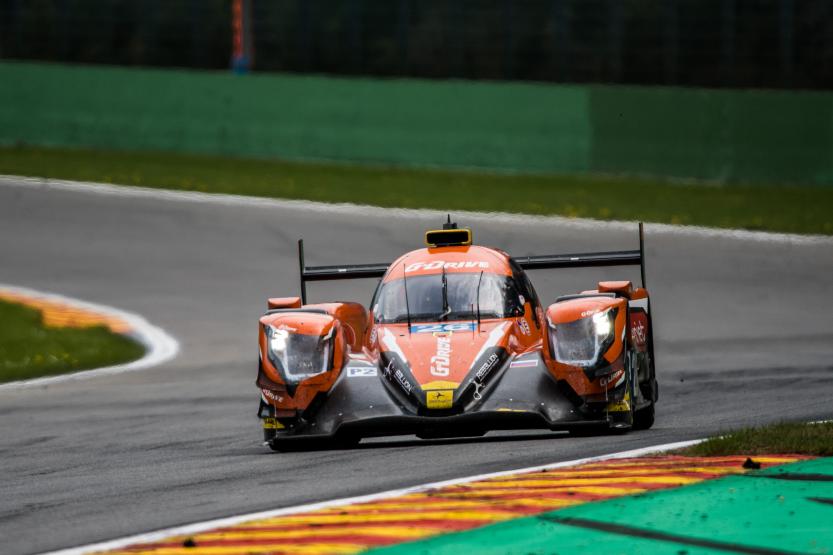 Roman Rusinov in the #26 G-Drive Racing ORECA 07 led the LMP2 field until a slow pit-stop allowed the #31 Vaillante Racing entry with Bruno Senna at the wheel to close the gap and eventually find an opportunity to take the class lead at the one-hour mark.

The #31 entry held the class lead but was put under pressure by Alex Brundle in the #37 Jackie Chan DC Racing ORECA 07. Alex Lynn, however, in the #26 G-Drive Racing entry was on a charge and took second place in class just before the end of the second hour and pushed on to close up on class-leading Julien Canal in the #31 Vaillante Rebellion car.

The #26 entry regained the lead and Pierre Thiriet, now at the wheel, was put under pressure from Bruno Senna in the #31 car as the race approached the fourth hour. Prost in the #31 entry took the lead with bold move on the #26 car at La Source. However a penalty given to the #31 car for contact with a Ford GT gave the #38 Jackie Chan DC Racing ORECA the chance to catch up with the leading pair.

As the race approached the 6–hour mark an issue for the #31 Vallainte Rebellion entry meant that victory went to the #26 G-Drive Racing entry, converting pole-position to the eventual top step of the podium. 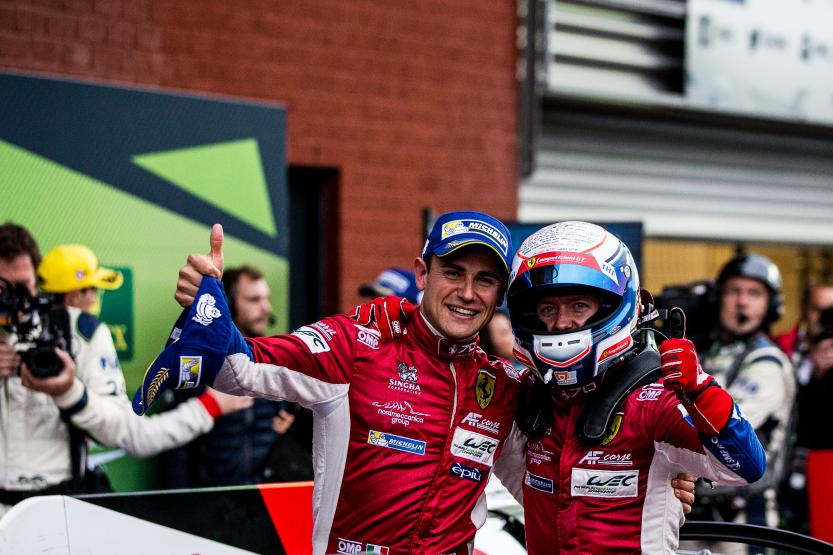 The 6 Hours of Spa-Francorchamps saw a dominant performance from the AF Corse Ferrari F488 GTEs which must cause concern to the Ford Chip Ganassi Team as it approaches the 24 Hours of Le Mans, a race which it won convincingly in 2016.

David Rigon, in the #71 AF Corse entry, took the lead in the first hour, despite being under significant pressure from the Ford GTs. The class battle was extremely close with James Calado in the #51 AF Corse entry seizing an opportunity to pass both the Ford GTs at Les Combes. Tincknell re-passed however and set about closing in on the leading #51 entry.

The class battle was not just between the marques though. The inter-team fight between the AF Corse entries saw the #51 Ferrari F488 GTE with Alessandro Pier Guidi at the wheel collide with Sam Bird in the #71 car at one stage. As the race went into its fourth hour it was clear that, barring issues, AF Corse had the advantage but with just 2.5 seconds between them at the fourth hour, which would be the eventual winner was more difficult to predict.

At the finish it was the #71 car with Sam Bird at the wheel that took the chequered flag for the class, followed by the #51 car.

The LMGTE Am class was won convincingly by the #98 Aston Martin Racing Aston Martin Vantage with the driver line-up of Pail Dalla Lana, Pedro Lamy and Mathias Lauda. This was the team third consecutive victory at the Belgian circuit, having won there in 2015 and 2016.

The eventual winning positions had been established by the end of the second hour, second place in class being taken by the #77 Dempsey-Proton Racing Porsche 911 RSR piloted by Christian Reid, Matteo Cairoli and Marvin Dienst.

In planning for the season ahead, I compiled, for my own use, a spreadsheet showing dates and rounds of the championships and series that I will be reviewing. With such a packed schedule on both sides of the Atlantic, if my spreadsheet is of help to you in planning your viewing or listening, please feel […]

As a day has passed since the EnduranceAndGt team sneaked on a ferry before chaos ensued in Calais, I thought I would record some thoughts on the race, and race week, when I could put them in perspective whilst they were still fresh in my mind. Detailed reports on four classes, and race results, will […]