Toyota Gazoo Racing took the final victory of the 2017 FIA World Endurance Championship after Sébastien Buemi brought the #8 Toyota TS050 he shared with Anthony Davidson and Kazuki Nakajima home one lap ahead of the #2 Porsche LMP Team Porsche 919 Hybrid driven by Timo Bernhard, Earl Bamber and Brendon Hartley, Bernhard at the wheel for the final stint.

Porsche LMP Team had previously secured both the Manufacturers and Drivers titles with Bernhard, Bamber and Hartley being crowned 2017 Drivers Champions at the previous round in Shanghai. 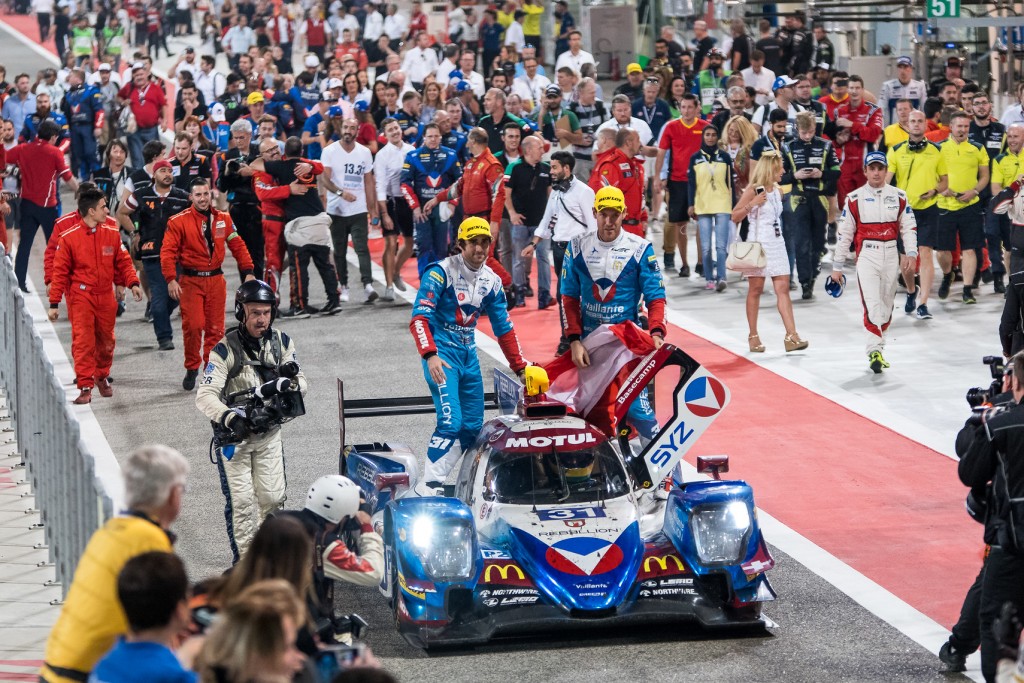 Third on the LPM2 class podium was the sister Vaillante Rebellion entry, the #13 ORECA 07, with Mathis Beche taking the final stint in the car he shared with David Heinemeier Hansson and Nelson Piquet Jr.

Ferrari finished 1 -2 in the LMGTE Pro class after AF Corse brought its #71 Ferrari 488 GTE home to take the class victory. Sam Bird was at the wheel for the run to the flag in the car he shared with Davide Rigon.

Second in class was the sister #51 AF Corse entry driven by James Calado and Alessandro Pier Guidi and James Calado, Calado bringing the car home at the finish, just .174 seconds behind the #71 entry.

The final podium spot in the LMGTE Am class was taken by the #67 Ford Chip Ganassi Team UK Ford GT of Andy Priaulx and Harry Tincknell.

Ferrari again dominated the podium in the LMGTE Am class although Aston Martin Racing took the class victory with its #98 Aston Martin V8 Vantage completing 170 laps in the hands of Paul Dalla Lana, Pedro Lamy and Mathias Lauda.

Singapore-based Clearwater Racing, who has already declared its intention to compete in the 2018/19 Super Season, finished second with its Ferrari F488 GTE piloted by Weng Sun Mok, Keita Sawa and Matt Griffin. Spirit of Race also put its F488 GTE on the podium when the #54 entry with the river line-up of Thomas Flohr, Francesco Castellacci and Miguel Molina finished third in class.

With four cars on the grid in the premier class, it was the #8 Toyota Gazoo Racing Toyota TS050 with Sébastien Buemi at the wheel who took the early lead, ahead of pole-sitting Neel Jani in the #1 Porsche 919 Hybrid.

There was drama in the first ten minutes after a bollard became dislodged and found its way under the #2 Porsche for which Timo Bernhard had to pit for removal.

Nick Tandy, driving the #1 Porsche also had an incident shortly before the half-way point when he made contact with the #86 Gulf Racing Porsche 911 RSR (991) driven by Nicholas Foster. The #1 car received a Stop-Go penalty after being considered to have been at fault.

Toyota could have finished the season with a 1 – 2 but the #7 car, with Kamui Kobayashi at the wheel, was involved in a collision with the #92 Porsche GT Team Porsche 911 RSR driven by Michael Christensen. The #7 car lost two laps due to the resulting repair and finished fourth in class.

The 6 Hours of Bahrain was the final appearance for the Porsche 919 Hybrid after first appearing in 2014.

All eyes were on the #31 Vallainte Rebellion entry and the ‘Mighty’ #38 Jackie Chan DC Racing entry in the LMP2 class as only four points separated them at the top of the class teams standings.

The battle lasted throughout the race with the #38 car, with Thomas Laurent driving, holding the lead in class at the half-way point. Bruno Senna in the #31 car, however, was in the lead as the race entered its final hour but drama occurred when he reported a power-steering failure.

Although early reports suggested that the #31 car was ‘undriveable’ Senna hung on and his lap-times barely dropped. Ollie Jarvis in the #38 car, meanwhile, put in a valiant final stint to close the gap to the lead car by less than 11 seconds but the expected drop-off in performance of the #31 car did not occur and Senna held on to take the victory.

In the Endurance Trophy for LMGTE Pro Teams, AF Corse took the title with its #51 Ferrari F488 GTE driven by James Calado and Alessandro Pier Guidi, who won three times during the season, at the Nürburgring, the Circuit of the Americas and at Fuji. The Ford Chip Ganassi Team UK #67 Ford GT finished second on 146 points.

Aston Martin Racing took the Endurance Trophy For LMGTE Am Teams with its #98 Aston Martin Vantage piloted by Paul Dalla Lana, Pedro Lamy and Mathias Lauda. The #98 crew won at Spa-Francorchamps, CoTA, Shanghai and at Bahrain in a season of consistency and excellence.

The FIA World Endurance Championship grid next assembles competitively at Circuit de Spa-Francorchamps on May 4 – 5 for the first round of the 2018/19 ‘Super Season’.

The No 1 Porsche Team 919 Hybrid, driven by Timo Bernhard, Mark Webber and Brendon Hartley won the 6 Hours Of The Cicruit Of The Americas, giving Porsche its third win on the circuit. In second place was the No 8 Audi Sport Team Joest Audi R18 with the driver lineup of Lucas di Grassi, […]

G-Drive Racing, managed by Kent-based JOTA Sport, has announced that Alex Brundle will join the team to partner Roman Rusinov and René Rast for the remaining rounds of the 2016 FIA World Endurance Championship season. Currently leading the LMP3 class in the 2016 European Le Mans Series driving for United Autosports, Brundle tested for G-Drive […]