When writing the story of the 24 Hours of Le Mans 2016, one word summarised everybody’s thoughts about the LMP1 class and what the fight would boil down to. That word was – reliability.

As one commentator, when discussing the weather forecasts for race weekend, said:

“I want it to be dry so we can see these things break.”

As race weekend approached these facts were known: Toyota Gazoo Racing had rapidly advanced its development programme to race the 2017 car in 2016. Inevitably this had caused some head-scratching at the early rounds of the FIA World Endurance Championship as the TS050 was being sorted. Porsche Team, Audi Sport Team Joest and Toyota Gazoo Racing were all only bringing two cars to Le Mans for financial and political expediency purposes. Audi and Porsche each had one less ‘bullet in the gun’ to fire at the challenge of the world’s greatest motor race. Porsche had changed to the 2015 battery pack for Le Mans. Audi had encountered some damper issues at the Test Weekend that took longer to resolve than we had come to expect from a team that could change a whole back end of a car in less than ten minutes.

In short, technology was being pushed to the very limit, development curves were near-vertical and no team was as confident in its reliability as maybe it had been in previous years.

The Audi Sport Team Joest cars occupied the third row. The #7 car, fifth on the grid, was started by André Lotterer while Loïc Duval started the #6 car.

Although the morning of the race had been clear, as 15:00 approached the skies grew darker until eventually the heavens opened and the race was started under a safety car. When the race did eventually go green, it became a scrap such as we have rarely seen.

During the night the two Toyota TS050s and the #2 Porsche 919 Hybrid showed their true pace and pulled away from the Audi Sport Team Joest R18s.

By Sunday morning, Toyota’s gamble to push forward with development of the 2017 seem to have paid off in paid off in spades. Sébastien Buemi drove superbly to put the #5 car into the lead. Anthony Davidson, who took over the driving duties, was on fire. Up to the last five minutes, Toyota’s victory for the #5 car with a third position for the #6 car looked a certainty.

Driving down the start-finish straight on its penultimate lap, the #5 car looked noticeably less crisp in its acceleration up the hill towards the Dunlop Bridge. Kazuki Nakajima radioed in to say he had lost power. As the car came round to start its last lap, it stopped, almost in front of its garage. Its race was over, a turbo issue being given as the reason for the failure. Nakajima completed a further lap but, outside of the permitted lap time, the #5 car was deemed a non-finisher. It was desperately disappointing end for the team and the drivers.

The #2 Porsche Team 919 Hybrid drove past to take the lead and the victory. 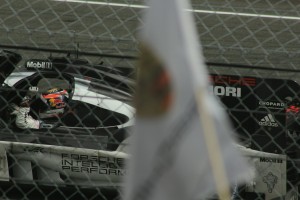 As some consolation, Toyota Gazoo Racing earned a second place with the #6 car and Audi Sport Team Joest, which had endured a torrid race week, took the final podium spot with the #8 Audi R18, driven by Marcel Fässler, André Lotterer and Oliver Jarvis.

Everybody felt for Toyota Gazoo Racing and team principals and drivers alike visited the Toyota garage to commiserate.

Porsche had won Le Mans for the eighteenth time.

Swiss racing team Rebellion Racing, 2017 FIA World Endurance Championship LMP2 champions, has announced that its LMP1 entry for the 2018/19 ‘Super Season’ will be an ORECA-designed-and-built chassis designated the Rebellion R 13. It will be powered by a Gibson engine. ORECA Group CEO Hughes de Chaunac is delighted at how the project has developed. […]

Photo: FIAWEC.com Toyota Gazoo Racing Finish 1 -2 In Round 2 Of FIA World Endurance Championship At Spa-Francorchamps (07.05.17) Toyota Gazoo Racing finished 1 – 2 at the end of a fascinating second round of the FIA World Endurance Championship from Circuit de Spa-Francorchamps. The #8 Toyota TS050-Hybrid with Sébastien Buemi at the wheel crossed […]