Victory in the final round of the 2018 British GT Championship went to the #33 Barwell Motorsport Lamborghini Huracan GT3 driven by Jon Minshaw and Phil Keen, finishing 29.584 seconds ahead on adjusted time from the #11 TF Sport Aston Martin V12 Vantage piloted Mark Farmer and Nicki Thiim after the TF Sport crew were handed a 30-second post-race penalty in the dying seconds of the two-hour race.

The podium positions were completed by the #116 ERC Sport Mercedes-AMG GT3 of Lee Mowle and Yelmer Buurman, who finished 20.288 seconds behind the #11 car, again on adjusted time.

Flick Haigh and Jonny Adam, teammates in the #75 Optimum Motorsport Aston Martin, finished in fourth place, earning the 18 points and the GT3 Drivers Championship title by 18.5 points over Minshaw and Keen. History was made at Donington Park with Flick Haigh becoming the first female driver to win a GT3 title in the UK’s premier GT championship.

Jonny Adam was delighted to take his third GT3 drivers title but was quick to say that it had not been an easy race.

“It’s a great feeling to win another championship,” said the 2017 24 Hours of Le Mans LM GTE Pro winner. “The team have been really good this year and Flick has done such a great job. It just fits so well, the final race for this car (the Aston Martin V12 Vantage GT3) and to get the championship. But it was hard -fought – it was definitely not easy. Flick had a good fight with the #69 Lamborghini and I found it really difficult to get by the (#1) Bentley. Bu we got there! Once we got into fourth, it was a case of ‘right, try not to make mistakes!” 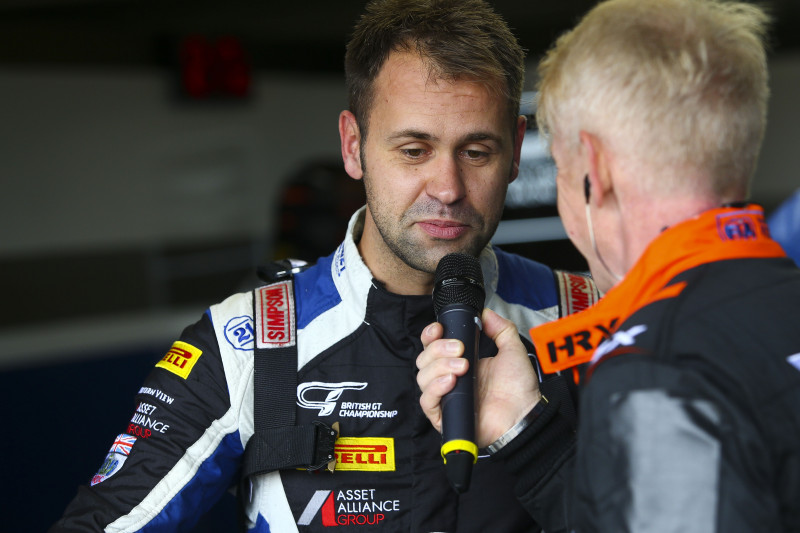 Teammate Flick Haigh praised Adam for his calm and knowledgable approach to the championship and was delighted to be take the GT3 title.

“It was fantastic – it was the best day of my life, to be honest,” said Flick Haigh. “Jonny is really easy-going. He’s taught me the car. He’s so knowledgable. He knows it inside-out. He’s helped the team as much as he’s helped me and it shows – he’s won three Championships with three different teams and three different teammates. There’s a special driver-coach there. I’m very proud.”

“Jonny is very chilled which is great for the team,” continued Flick Haigh. “This morning I was a bit nervous but once you’re in the car, you know what you’ve got to do. If he’s calm then I’m calm and the team are calm.”

The 2016 British GT Championship draws to a close with the final meeting of the year at Donington Park on the weekend of September 10 – 11. The meeting will comprise of a two-hour race on Sunday September 11, in contrast to the two one-hour races format which fans enjoyed at a sun-drenched Snetterton on […]

Black Bull Ecurie Ecosse celebrated a double victory as Rob Bell brought the #70 McLaren 650S GT3 home to win the final round of the 2016 British GT Championship, ahead of the #17 TF Sport Aston Martin Vantage GT3 with Jonny Adam at the wheel. TF Sport’s second place ensured that Derek Johnston and Jonny […]